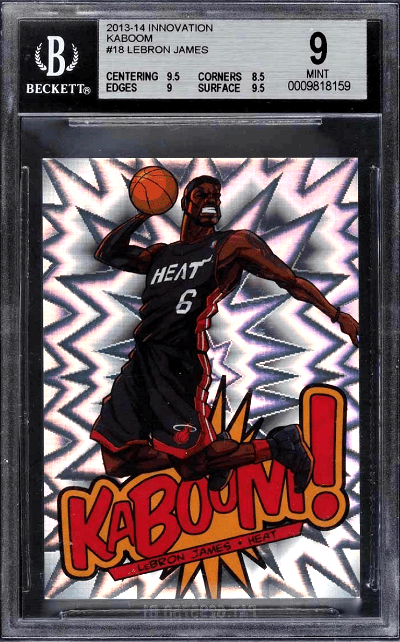 The Miami Heat era of LeBron James’ career was King James at peak villain status. Like most Kings throughout history, James was equally beloved and despised.

This era also saw James at peak performance (though his skills have hardly diminished since.

As a member of the Heat, James never averaged fewer than 26 points in a season. He took home two MVP trophies during that stretch. He was, to put it simply, dominant.

And yet, critics will never forgive James’ choice to join two fellow studs in Dwyane Wade and Chris Bosh, nor the manner in which James announced his decision.

As a collector, you might target cards from this era for a few reasons. Perhaps you remember LeBron’s sting with the Heat fondly, you love a good villain, or you see value in cards from this period.

We’ve identified some of the assets that you should target if you’re coveting a Heat-era LeBron trading card.

Let’s put it out there: LeBron’s Heat-era cards are lacking in at least one way. That is, they could never be rookie cards.

While conventional collecting wisdom is to seek out rookie cards, you might find stronger value in LeBron’s cards from the Heat era.

Here are five of the top cards featuring LeBron James as a member of the Miami Heat. 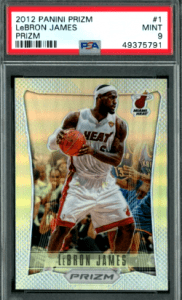 The 2012-13 set of Panini Prizm NBA cards put all of its eggs in the chrome basket. And why not? A little flash never hurt a trading card’s value.

LeBron served as the leading man for this set. His card was the first in the set, which is fitting considering that he took home the MVP following the season.

Gem Mint copies of this card have trended towards the $50,000 mark. Expect the 2012-13 LeBron James Panini Prizm #1 to surpass that price point in short order.

Why? For one, the card is sleek.

It features LeBron as he transitions from a teenaged rookie into the bulkier veteran we know him as today. He sports the white Heat swingman jersey with a matching headband.

James holds the Spalding basketball protectively as multiple faded images of Thunder defenders lurk to his left. A chrome outline adds a sparkle to James’ image.

The backside of the card features a non-stylized version of the frontal image. It includes a tribute to LeBron’s first NBA Championship, stating that he removed a “500-pound gorilla” from his back.

The 2012-13 LeBron James Panini Prizm #1 is one of the premier Heat-era LeBron James cards on the market. Expect to dish out multiple tens of thousands for a mint copy. 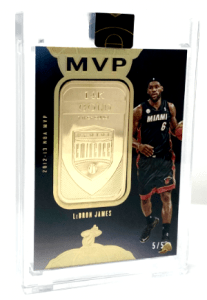 By 2019, LeBron James had long left the Miami Heat. He had since won a championship as a Cleveland Cavalier and even announced his intention to join the Los Angeles Lakers.

And yet, the 2019-20 set of Panini Eminence basketball cards contains multiple cards featuring LeBron James as a member of the Miami Heat.

One card in particular, the Panini Eminence Finals MVP Silver Bar #7, is worth considering as an investment.

“LeBron is one of only 8 Finals MVPs featured in this set, along with Shaq, Kawhi Leonard, Dirk Nowitzki, Wmilt Chamberlain, Dwyane Wade, Magic Johnson, and Tim Duncan.”

The most prominent feature of the card is a rounded rectangular slab of precious metal. Which metal the card contains—silver, gold, or platinum—depends on the specific parallel.

Above the metal insert is an “MVP” graphic styled to look like the top tier of a trophy. Beneath is a small, reflective “LeBron James” nameplate and a small Miami Heat logo.

An image of LeBron in his all-black Heat uniform occupies the right side of the card. He dribbles the ball with his left hand, standing tall as he assesses the action.

The Gold Bar parallel of this card is numbered to 5 copies and has sold for more than $6,000. The Platinum parallel is numbered one of one, making it an even sounder investment. 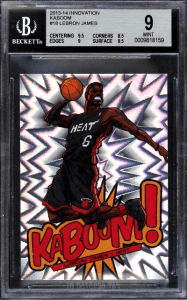 The 2013-14 Panini Innovation set is a throwback to the days of cartoon-style basketball cards (see Michael Jordan Cards).

The design is thoroughly outside of the box. You’d have difficulty picking this card out of a lineup of NBA-themed comic strips.

The Kaboom! series from this set was reserved for only 20 players. Though it’s technically an insert, LeBron’s Kaboom! insert is one valuable insert.

Mint copies have sold for just shy of $15,000, and Gem Mint copies could go for significantly more. Collectors with a soft spot for artistic cards might drive the price up beyond normal market value.

The card features a cartoon-ized LeBron in his black Heat #6 jersey. His right arm is flexed, ball in hand as he engages in a tomahawk jam.

It’s a one-of-a-kind card that will appeal to fans of ultra-unique LeBron memorabilia. 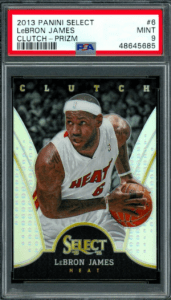 Though the Silver Prizm is a nice card, we chose to feature the Panini Select Clutch #6 instead. Ultimately, it was a matter of proven sale price.

Only 15 players are featured in the Clutch Set. This alone gives the LeBron James Select Clutch #6 the feel of rarified air.

The card’s front features a reflective silver banner reading “Clutch”. Ironically, “clutch” was a description that LeBron had to earn, and would earn during his time with the Heat.

James holds the ball in a three-point stance, clad in his white Heat jersey. A V-shaped background contains black marble on the interior and gold-and-white coloring on the exterior.

A small “LeBron James” nameplate sits beneath a larger “Select” logo on the card’s bottom portion. 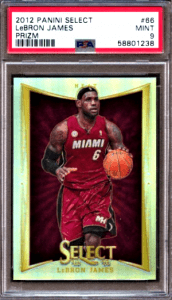 The final card on our list is the 2012 LeBron James Panini Select Silver Prizms #66. This card has topped the $6,000 sale mark, making it one of the most valuable Heat-era LeBron cards.

There is strong demand for the Panini Select series, and this card proves it.

A glossy surface features LeBron in his red Heat uni, dribbling in his left with his right hand held palm-down. A look of intense focus drapes James’ face.

A silver border takes on a reverse-dome effect at the top, while a red-black interior backdrop contains a faint starburst pattern.

Reflective streaks make the image of James pop and contribute to this card’s status as one of the most attractive Heat-era James cards available for purchase.

Panini Select cards don’t take the “Select” distinction lightly. They generally have a premium feel and appearance, and this card is no exception. 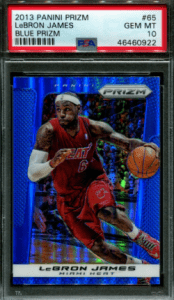 The most expensive LeBron James card from his Miami Heat days is the 2012-13 LeBron James Panini Prizm #1. Though subject to change, the Gem Mint copy is still a sub-$50,000 card.

Either of these cards would be significant investments for most collectors, as would the other cards we’ve listed.

Compare these price points with the cost of a Gem Mint LeBron James rookie card, though, and these suddenly look like bargain bin prices.

Rookie cards are always going to draw top dollar when it comes to investing. Obviously, by the time LeBron joined the Heat, he was well past his rookie year.

We’re still talking about LeBron, though. So long as you secure a high-value card in good condition, expect the cards we’ve listed here to rise steadily in value.

Will you re-sell your Heat-era LeBron card for $1.8 million—the going rate for LeBron rookie cards these days?

Maybe not. But then again, who knows?

LeBron is one of the safest bets in card collecting. Whether you’re considering one of his rookie cards or a card from his later playing days, it’s tough to go wrong.