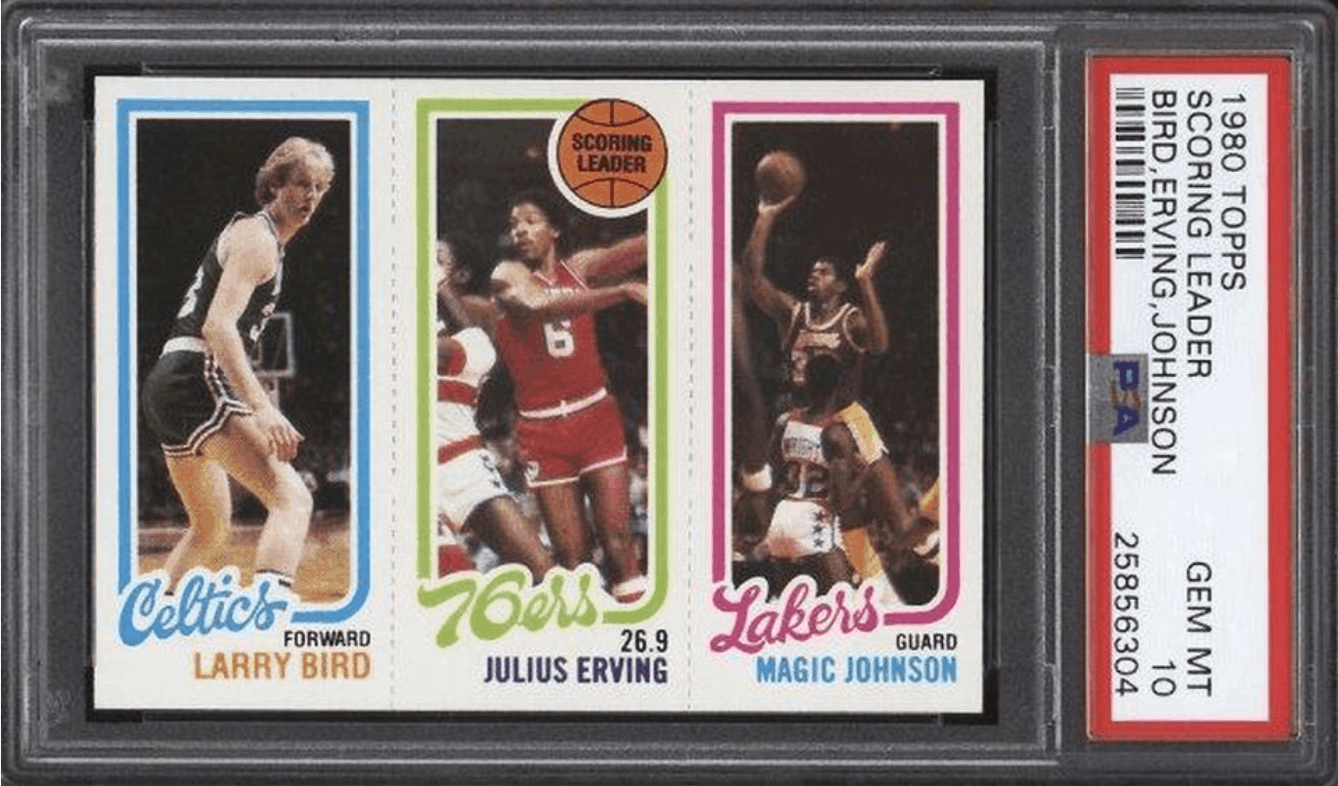 Larry Bird (12/7/1956) attended Indiana State University and was drafted by the Boston Celtics with the 6th pick overall in the 1978 NBA Draft (who in the world were the 5 people drafted in front of him!).

In 1979 (Larry Bird’s rookie year) he averaged a mind-blowing 21.3 points and 4.5 assist which is insane for a rookie in the NBA (unless your name is Zion… see the Best Zion Williamson Rookie Cards money can buy). He went on to play 13 years in the league averaging 24.3 points per season.

Despite having Magic Johnson to contend with he still won the NBA Rookie of the Year Award in 1979.

Here are the top Larry Bird basketball cards for investment purposes (including one rookie card). 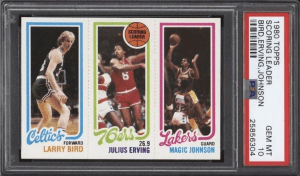 Here is the only Larry Bird rookie card worth owning but it is a good one.

The card features Bird with the legendary Magic Johnson and Julius Erving. Initially, the card was not that popular with collectors but it has soared over the last few years.

The card is extremely difficult to find in PSA 8 or higher as copies are common to find with print defects. 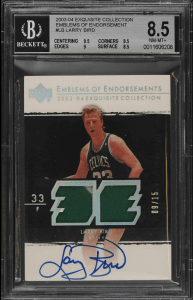 This is our favorite Larry Bird card… period. 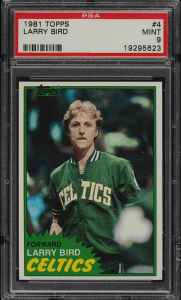 The 1991 Topps Larry Bird card is from the year Bird lead the Celtics to the NBA Championship.

Larry is showing off a Celtics warm-up jacket while waiting to drop dimes from the outside. 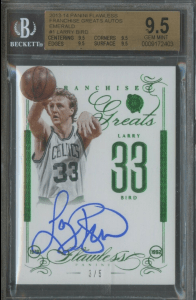 Another high-end Larry Bird auto card numbered #FG-LB and the back reads “The Celtics are one of the most storied franchises in all of sports thanks to players like Bird, who exemplified the spirit of the Celtic Pride. “Larry Legend” quickly ascended to Beantown royalty after collecting three straight MVP awards and helping Boston capture three NBA Championship”

The card shows Bird making his classic no-look pass to a teammate for what we are thinking is a slam-dunk. 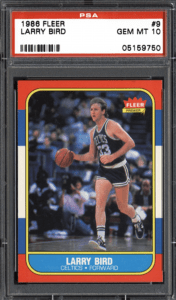 The 1986 Fleer set is also home to one of the best rookie card investments in the hobby in the form of the Michael Jordan Fleer rookie card… BOOM goes the dynamite!

The most valuable Larry Bird RC is the 1980 Topps Larry Bird Magic Johnson Julius Erving Rookie Card (many investors consider this one of the top NBA cards of all-time).

The value of his 1980 RC will totally depend on the grade.

If you would like an estimated value on any of your Larry Bird basketball cards please email us at value@goldcardauctions.com… please allow up to 72 hours for a response and include at minimum 2 photos (back and front).

If you are looking to purchase a Bird Basketball card but want advice before making the purchase hit us up at advice@goldcardauctions.com.

Sadly back in the day basketball players usually only had one rookie card as basketball cards were not popular and very few kids even bothered collecting them. 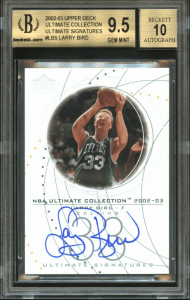 Larry Bird is consider one of the top NBA players of all-time and has a huge following.

The 1980 Topps Larry Bird Magic Johnson Julius Erving Rookie Card should only gain in value over time and if you can find a PSA 10, PSA 9, or BGS 9.5….

BUY IT… it should increase in value more than any of his cards year over year.