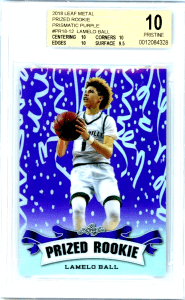 LaMelo Ball may be the best of the Ball brothers but has a long way to go before you catch us buying any of his rookie cards.

LaMelo Ball (8/22/2001) opted to play for NBL Australia rather than playing college ball in the US… that’s already a red flag in our book (justified or not).

He has done fairly well, however, averaging 17 points, 7.6 rebounds, and 6.8 assists per game.

Ball is predicted to be a top 5 draft pick in the upcoming 2020 NBA Draft and by some maybe even Number #1.

Let’s take a look at the early LaMelo Ball RC on the market for those who can’t wait for the bigger companies to release their Ball rookie cards.

The Leaf LaMelo Ball Prized rookie card is our favorite of all the cards released to date.

The card is by far the best looking of them all and has a pretty cool backdrop.

#Numbered #PR18-12 the card is available in blue, green, and pink backdrops. 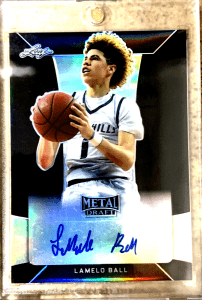 Here is one for the autograph fanboys.

The 2018 Leaf Metal Draft Auto LaMelo rookie card shows him primed to shot a free throw (and most likely miss).

The card is Numbered BK-LMB and only 50 autograph cards were produced. 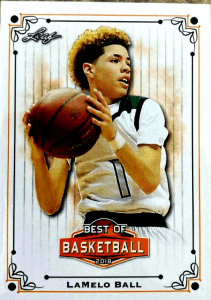 Here is the final card in what was a rough search for any legit LaMelo Ball rookie cards.

The 2018 LaMelo Leaf Best of Basketball card shows him getting ready to inbound the ball? Knowing him he makes a sloppy, lazy in-bound pass and the other team picks it off for a steal.

Numbered BB-11 the card has at least a pretty cool backdrop consisting of what appears to be a dirty basketball court. 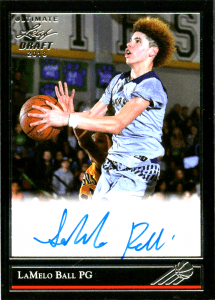 Most LaMelo rookie cards will go for under $100 but this price will likely increase as high-end cards are released.

As you may guess via the tone of this article we are not huge LaMelo fans… in fact, we’re not big fans of anyone in the family.

Having said that there is some value in his higher end rookie cards once they are released (i.e. Prizm, Flawless, National Treasures)… these cards will have some value and can expect an upward trajectory until LaMelo Ball proves otherwise.

Are we buying his rookie cards? No…

Will we buy his high-end rookie cards once they are released? No…

…not because we don’t think there is a decent chance for a good ROI, we simply do not like the player… sometimes you just have to pass on that reason alone 🙂