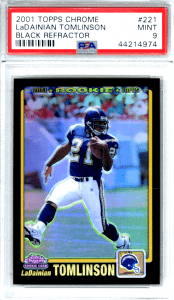 LaDainian Tomlinson was one of the most electric running backs the National Football League has ever seen as he often would make defenders look silly on his way to the endzone.

No defenders wanted to attempt to make an open-field tackle on “LT” as it was next to impossible.

Tomlinson excelled in college at Texas Christian University and for that was selected with the 5th selection in the 2001 NFL draft by the San Diego Chargers, a team he would play for between 2001 and 2009 before moving to the New York Jets.

Tomlinson was not only a great runner but also one of the best pass-catchers out of the backfield as he was way too quick and shifty for the more slow-footed linebackers that were often tasked with the assignment of guarding him.

One fun fact that many may not know about Tomlinson is how many passing touchdowns he had in his career.

Tomlinson was often used in trick plays and thus managed to throw seven passing touchdowns in his career, showing what a complete football player he was.

While on the Chargers Tomlinson would be a part of one of the more explosive offenses the NFL has seen, but the Chargers never could translate their offensive firepower into postseason success.

Twice in his career did he reach conference championship games, once with the Jets and once with the Chargers, but he would never get the opportunity to show his skills in a Super Bowl.

When Tomlinson retired, he was second in career rushing touchdowns and third in total career touchdowns.

These accolades would lead to his number twenty-one to be retired by the San Diego Chargers and in 2017 he was inducted into the Pro Football Hall of Fame.

Here are the top 3 LT rookie cards for your investment portfolio. 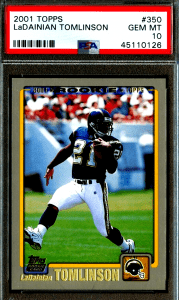 This was the basic Topps rookie card for LaDainian Tomlinson that was produced in large numbers and features the running back peering over his shoulder as he sprints away.

For Tomlinson collectors, this card is a great start as it is not too hard to find and can be a great backbone for a collection.

Interested in buying a Hobby Box? Check out the Topps PROJECT 2020

For serious investors, this card may not offer the same upside that a rarer, more unique Tomlinson card will.

The maximum price will be capped due to the more common nature of the card, but it still serves a role as a more introductory card for novice collectors or those who don’t want to take the full leap on Tomlinson. 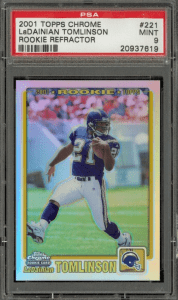 This card is very similar to the one mentioned above but it is a part of the popular Topps Chrome set.

The base refractor was limited to only 999 copies and there are other refractors that were produced in even more limited runs.

This card is a great option for investors who want to jump into the LaDainian Tomlinson market and want higher potential upside but don’t want to pay the upfront costs that an extremely high-end card would cost.

2001 Topps Chrome Refractor Parallels: Only one… Black Refractor that has 100 copies… good luck getting your oven mitts on that bad boy 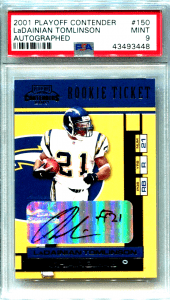 This may be the most luxurious and high-end LaDainian Tomlinson card produced.

The Playoff Contenders Rookie Ticket subset is one of the most well-known subsets among football cards and is a strong, recognizable brand.

The card has an autograph that has been stickered to it and it looks very visually appealing.

It resembles a game ticket and the combination of the branding, autograph, and Tomlinson’s legacy makes this a desirable card that is worth a good amount in good condition.

With it being the premier Tomlinson card, it has the highest upside for any investment opportunity and deserves a long look from collectors.

While it may take some money to get the cards into your hands, there’s a larger possibility it will all pay off down the road. 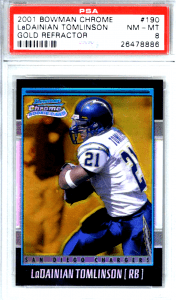 The most valuable LT rookie cards are the Playoff Contender and Topps Chrome cards.

The LT Topps Chrome Black Refractor rookie card is most likely going to fetch the most amount of money at en eBay auction.

Tomlinson holds the record for most touchdowns in a season with 31 and it was no accident as he was an amazing player.

No Charger will ever wear his number again and even when he finished his career with the Jets, he was an impactful player.

For those looking for an investment, Tomlinson may be at a point right now where some of his hype has faded and his cards could be purchased for a good price.

He has already received the honorable acclaim of being inducted into the Pro Football Hall of Fame, so he does not have many accolades left to garner.

Still, Tomlinson has a case as one of the best players in NFL history at one of the most glamourous positions and therefore it will never be a bad thing to have a few of his cards in your collection.

For novices to expert collectors alike, there are Tomlinson cards available at every price range and they are all viable options.