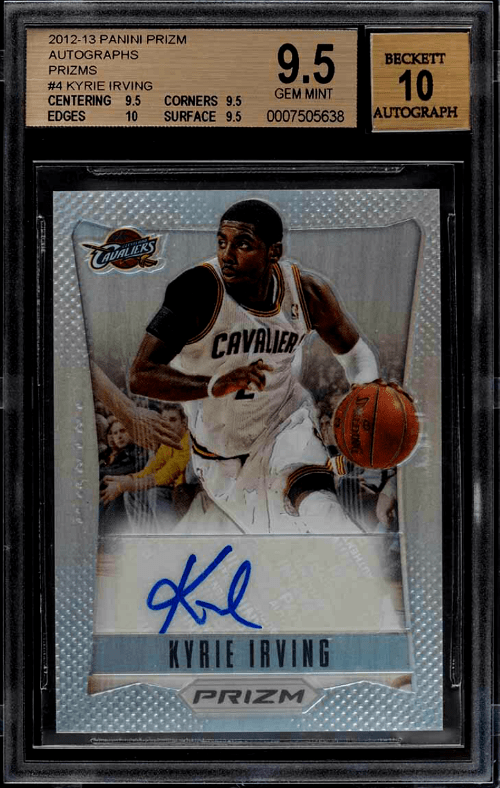 Brooklyn Nets All-Star point guard Kyrie Irving has arguably the best handles in the NBA. He gives defenders fits every time he executes a crossover or behind-the-back dribble. Irving was born on 3/23/92 in Melbourne, Australia. He is the son of American ex-pats Drederick and Elizabeth Irving.

Irving played for the Duke Blue Devils in the 2010 NCAA season. He played in just eight games for Duke due to a toe injury. He averaged 17.4 points, 3.8 rebounds, and 1.5 steals. Irving returned for the Sweet Sixteen game against the Arizona Wildcats, scoring 28 points in a losing cause.’

The Cleveland Cavaliers made Irving the first overall pick of the 2011 NBA Draft. Irving won the 2012 NBA Rookie of the Year Award, averaging 18.5 points and 5.4 assists. A year later, he played in his first NBA All-Star Game.

Irving signed a five-year, $90 million contract extension with the Cavs in the summer of 2014. That year, Cleveland had a formidable trio of Irving, LeBron James, and Kevin Love. They eventually helped the Cavs win their first NBA title in 2016.

The Cavs traded Irving to the Boston Celtics in the summer of 2017. He played out the final two years of his contract in Boston, becoming an All-Star in 2018 and 2019. Irving signed a four-year deal worth up to $141 million with the Brooklyn Nets in July 2019.

If you want a near-flawless Kyrie Irving rookie card, this is it. The front of the card shows Irving making a move to the basket. The sky-blue background and autograph at the bottom make for nice finishing touches.

The back of the card reads, “The NBA Eastern Conference Rookie of the Month Awards that Irving piled up in 2011-12 eventually added up to a bigger prize. He sealed Rookie of the Year honors by becoming the second rookie ever to average 18.0 points and shoot at least 39.9 percent from 3-point range. The other was Larry Bird in 1979-80.” 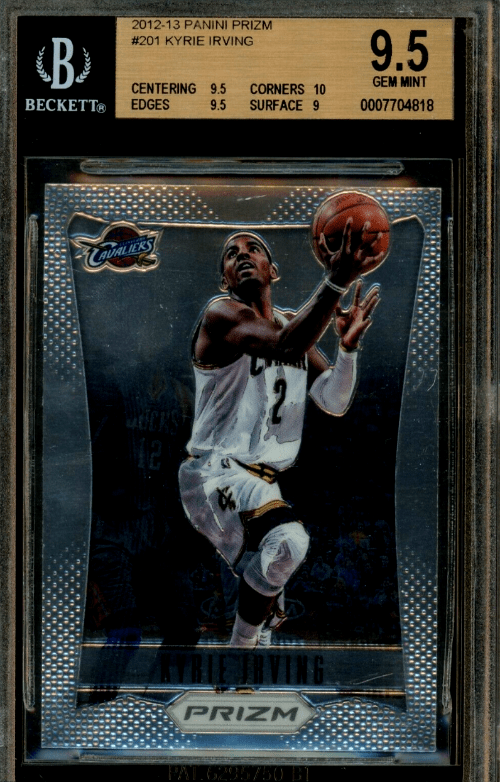 Here’s another Panini Prizm Kyrie Irving rookie card worth your while. A photo of Irving driving to the hoop with a slick gray background makes for an awesome combination.

The back of the card reads, “One of the NBA’s quickest young players off the dribble, Irving has honed his devastating crossover since he was a kid. ‘I practiced the Tim Hardaway move over a million times,’ Irving told The News-Herald. ‘When I was in elementary school, that’s the only move I had. That’s why it’s my go-to move now.’”

Kyrie Irving’s crossover is truly one of the deadliest weapons in his arsenal. 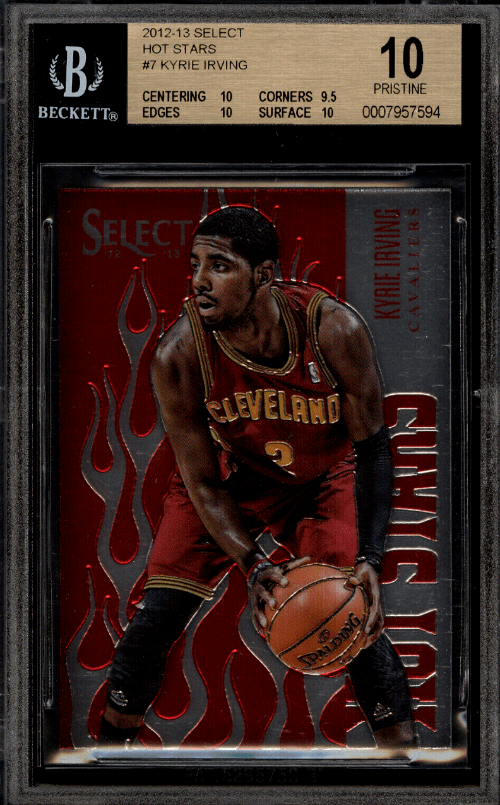 This card is perfect for the casual card collector – it won’t create a massive dent on your wallet. Plus, expect a nice return on your investment.

The front of the card shows Irving about to pull up for a jumper. We think the fiery-gray and sky-blue background capture Irving’s game perfectly – when he’s on fire, it’s hard to stop him. 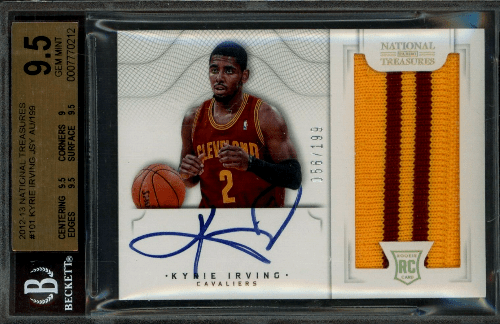 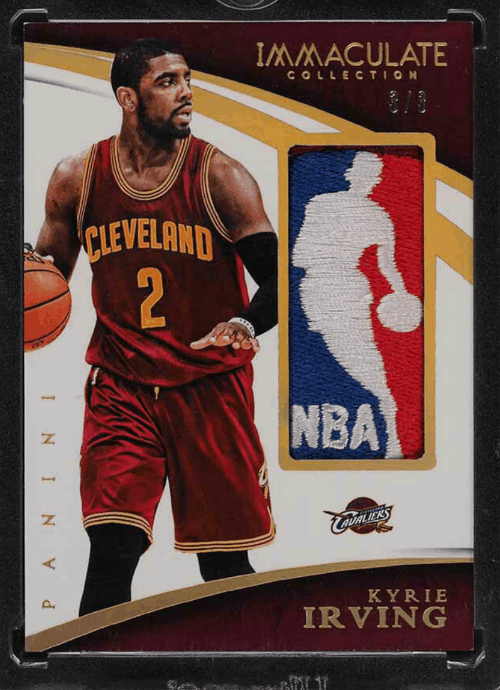 The most expensive Kyrie Irving RC is going to be one of his high end 2012 Prizm rookie cards (i.e. Green or Gold).

The most common Kyrie Irving card found on eBay is his Prizm rookie card.

If you are considering buying a Kyrie rookie card but would like some advice please email us at advice@goldcardauctions.com or visit the Gold Card Auctions Contact Page.

Kyrie Irving is already an established NBA veteran. Nonetheless, his best years are still ahead of him. His amazing ball wizardry and creativity make him one of the best point guards in the NBA. Expect him to earn many All-Star nods year in and year out.

The biggest drawback is his health – Irving has yet to play a full 82-game season in his NBA career. This could hinder his entry into the Naismith Memorial Basketball Hall of Fame in the future.