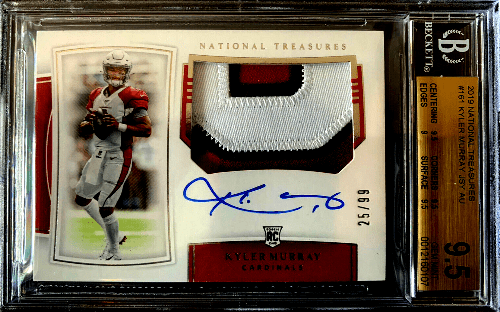 Kyler Murray (08/07/97) is a quarterback who plays for the Arizona Cardinals in the NFL. Murray was the first pick in the first round of the 2019 Draft after an incredible season in which he won various awards, including the Associated Press College Football Player of the Year while tossing the pigskin around at the University of Oklahoma.

After being the first pick in the NFL draft, many experts called for a good season… they were correct for a chance as Murray has one of the best seasons for a rookie QB.

His play and hype inevitably led to the price of his rookie cards going through the roof; PLUS, we think they will go even higher. Let’s check out the top-rated Murray RCs from an investment perspective.

Updated: We’ve listed a few of the best Kyler Murray rookie cards to look out for no matter your budget (large or small). 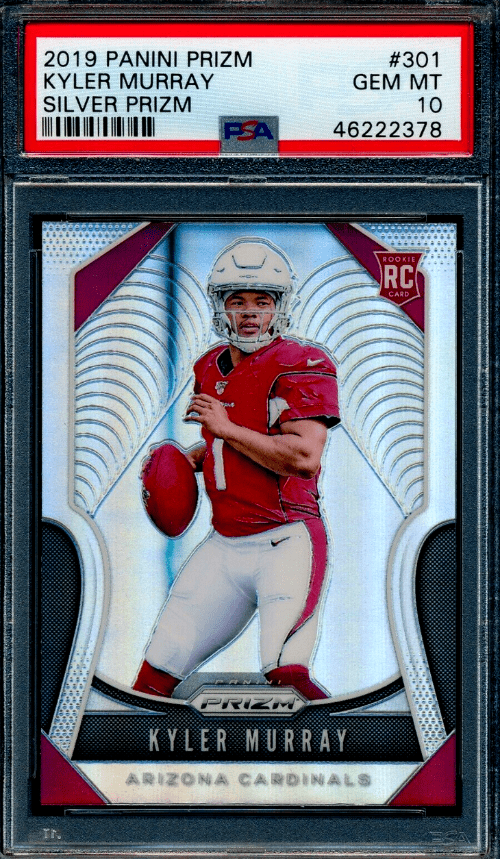 The Kyler Murray Prizm rookie card will be his most common high-end rookie card, which means you will have no problem finding it up for auction on eBay, but it will still be a worthwhile investment.

The card is numbered #301 and shows Murray dropping back looking to hit a streaking receiver. Buy these cards while you can, as the price will surely only go up as we creep towards September 2020.

Here is a classic big boy card for big boy bank accounts… you better come loaded for bear if you want to obtain this bad boy.

The 2019 Kyler Murray National Treasures rookie card is #161, and only 99 are available… if you can get your hands on this bad boy and are interested in selling or trading the card, hit us up at info@goldcardauctions.com.

Kyler is pictured on the far left, dropping back in the pocket, and his signature is found on the right/middle/center of the card right above the patch.

His name (Kyler Murray) and team name (Arizona Cardinals) are printed in the bottom right-hand corner. A special card for high-end investors looking for a massive ROI from Kyler over the next few years. 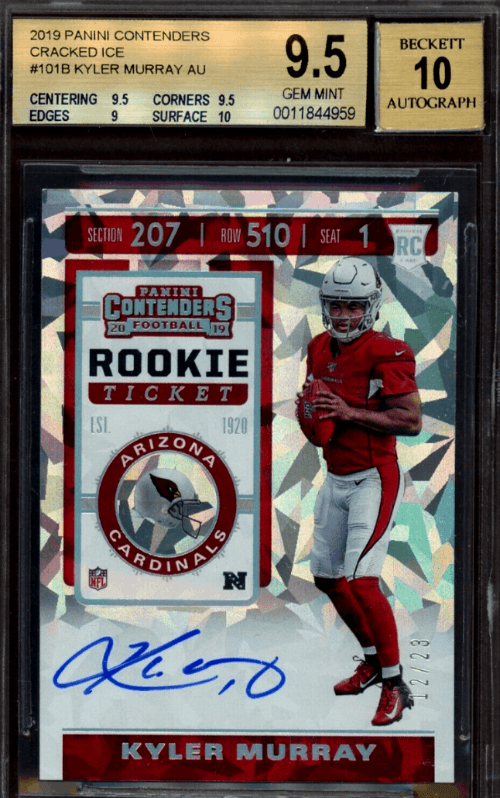 BOOM goes the dynamite!  We LOVE this card and are looking to buy it sooner rather than later. We here at GoldCardAuctions have always been a fan of the cracked ice look, and when you combine that with one of the best young QBs in the game, do we need to explain? 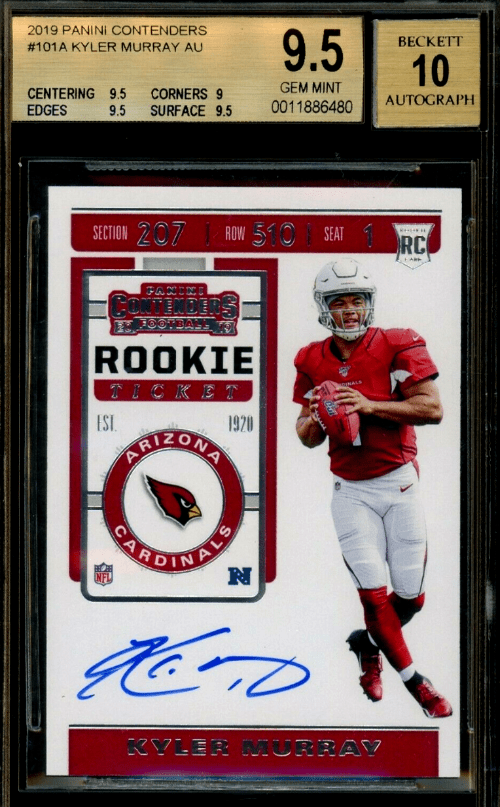 See the above card but not nearly as expensive but still a great second option for those who aren’t willing to take a second mortgage out on their house to get the cracked ice version. 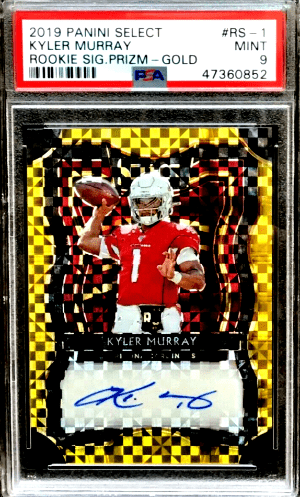 This Murray rookie card is gorgeous and is 2nd to only the rookie ticket cards, in our opinion, in terms of sheer beauty.

Number #RS1, the card shows Kyler tossing the football gently to an RB in the backfield. His autograph is placed bottom/center with his name printed just above the auto. Some collectors may say it’s too busy, but we love it. The card is numbered #RS-1 and will cost a few weeks’ salaries in most cases. 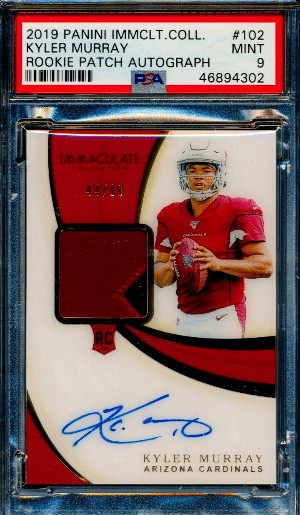 For the high-end collector looking to spend a few dollars. The signature on the front is hard to miss, while the back has a paragraph dedicated to his ‘struggles’ as a 5”10 man on the football field.

As they note, his lack of height never impeded him as he managed to take home the Heisman Trophy in 2018. Along with the autograph, you’ll find a prominent patch in his rookie colors, which should help to bump up the cost in the long run. 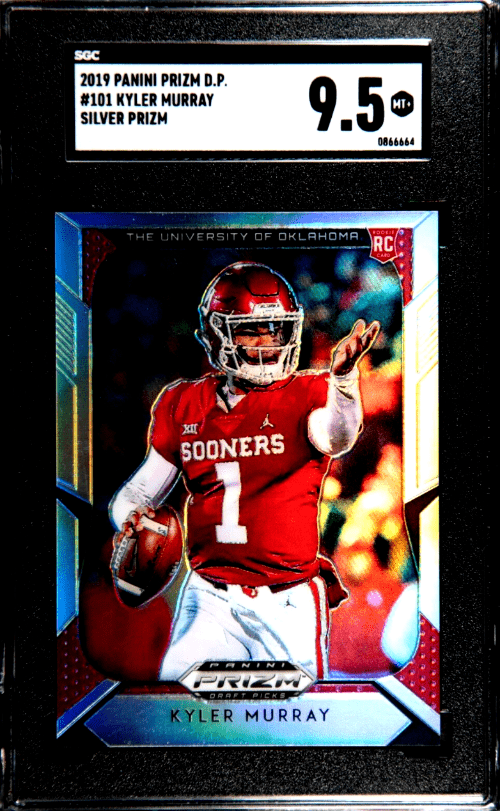 Some people turn their noses up at stickers, but the Panini Prizm Draft Pick is a great way to pick up a cheaper piece of signed Murray memorabilia. Special versions are highly collectible, although they do begin to pick up in price fairly rapidly depending on rarity.

The reverse typically shows off the same image as the front, along with the usual guarantees about the legitimacy of the autograph. 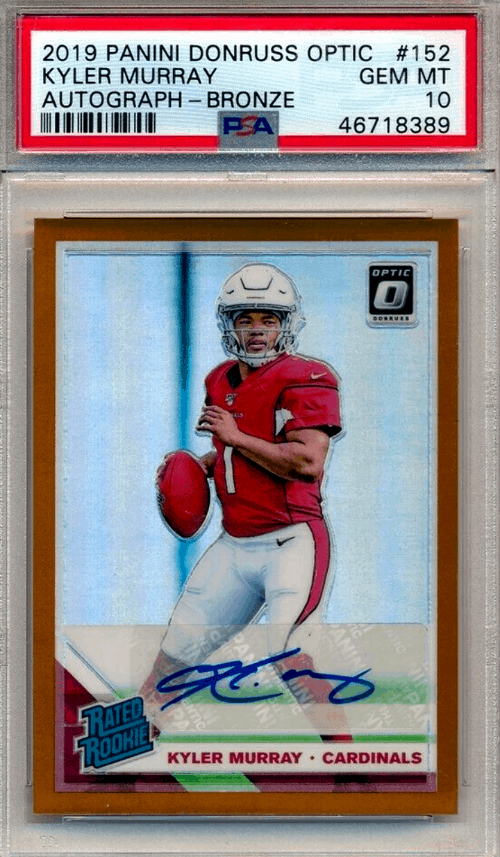 Here is a SOLID card for the hobbyist who is just getting into sports card investing and would only like to spend a few bucks (well under $100 anyways). The Kyler Murray Donruss Optic rookie card is numbered #152 and is a super affordable option for most collectors. 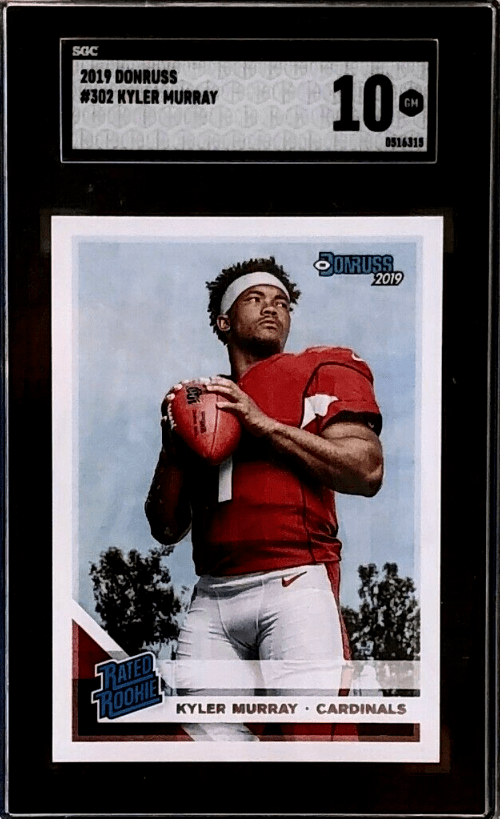 If we were going to buy one of the less expensive Murray rookie cards, this one would be it… it has that IT factor. There is something about the Donruss Kyler Murray Rated Rookie card we like. His stern, somewhat pissed-off look and the trees in the backdrop PLUS the white sweatband do it for us. 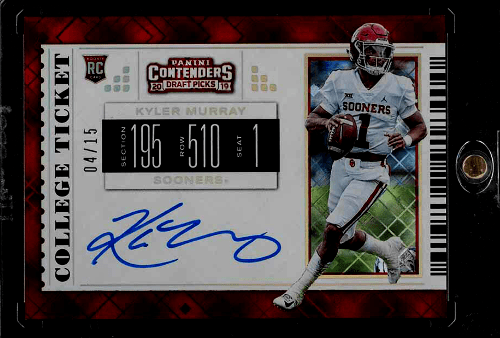 The Panini Contenders College Ticket is pricier, but you’re paying for the rarity and the on-card autograph. The card is part of a set that is always popular, with multiple parallels that will interest collectors and buyers whenever they’re available at auction.

“Kyler is a unicorn and is a blast to watch on TV… must-see TV when Kyler Murray is on!”

The front features a famous autograph at the bottom, with an RC logo on the top left. Murray is pictured in full stride on the right-hand side, while the back has a zoomed-in image and information about his previous stint as the first-round pick in the 2018 baseball draft. You’ll also find a short list of his most significant career achievements, such as his AP award and Big 12 records. 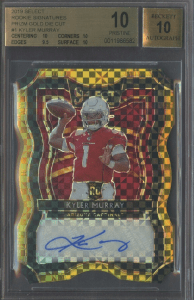 The Cardinals’ QB is undoubtedly one of the top young players in the NFL, in a position that is consistently among the most popular for fans.

His rookie season was almost perfect in terms of numbers, and he looks like a significant prospect for the future. Kyler rookie cards aren’t too inflated for now, although that could change quickly in the next few seasons (and maybe as soon as this one).

Murray is a phenomenal athlete; you’ll have to spend a few bucks to pick up one of his cards. It should be worth it in the long run. Will he take the next step towards stardom or will he flame out like Baker Mayfield?

If you would like us to provide an ESTIMATED value of a Kyler Murray card you have, please email us a few pictures at value@goldcardauctions.com

Not into football? Invest in one of the best options in the industry! Check out our Michael Jordan Rookie Card write-up and thank us later.