Kris Bryant (1/4/92) rookie cards have been a hot item since he was called to the Chicago Cubs in 2015. A highly decorated athlete, Bryant was a World Series champion, the NL MVP in 2016, and a three-time All-Star.

It didn’t take Bryant long to make an impact in the big leagues as he walloped a mind-blowing 26 home runs in his rookie season to go along with 99 RBIs and a .275 batting average.

The Cubies knew they had an All-Star caliber player on their hands.

We’ve listed a trio of the best Kris Bryant rookie cards, along with an investment report looking at what could be a critical stage of his career as his contract winds down.

Bryant was seen as the next big thing in baseball as the second overall pick in the 2013 Draft, and his first prospect cards were released in 2012. There are several quality options from 2013, including his first Bowman Chrome Autograph.

As such, his rookie options hail from 2015 onwards, and Bryant has 15 base rookie cards to keep an eye out for. (Along with hundreds of parallels and unique versions.)

Which are the best if you’re looking for a couple of investment pieces? Here are three cards that you should be looking at. 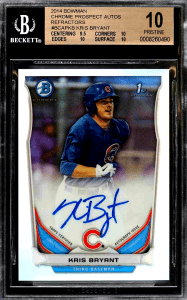 It’s not a traditional RC by any means, but it’s worth checking out the 2014 Bowman Prospect if you’re interested in one of his most popular cards. (It’s not as pricey as the 2013 Bowman Chrome Draft Auto, which is the highest of the high-end.)

There’s a prominent on card-autograph found on the final version, which also features an image of Bryant in motion with a wry smile on his face.

As well as a Bowman 1st logo on the top, many attractive rare refractor cards raise the average price by a decent margin. The truth is, many of his prospect cards are worth more than his rookie versions, especially for collectors who don’t care for the minute differences between ones from the early years.

If you don’t mind prospect cards, it’s a solid investment piece as Bryant enters the prime of his baseball career.

*It’s worth mentioning that it was released twice as part of the 2014 Bowman Baseball and 2014 Bowman Chrome Baseball sets. 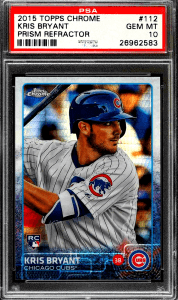 The second card to make a list is a bonafide RC released in 2015. His Topps Chrome card has an extensive list of parallels that cause the price to go up significantly, although a PSA 10 graded Prism Refractor version can still be found for under $100 at auction.

It has a close-up image of Bryant as he prepares to swing, showing everything you need to know about a player who has hit more home runs in his first five seasons than Ernie Banks. It’s a great no-risk investment option from a famous collector’s set.

Arguably the most popular Bryant RC option by a fair margin, the 2015 Topps Dynasty could be the ideal pick due to its rarity and potential for future profit. The signature/player patch combo is key to the interest and the asking price, with a strong emphasis on luxury.

The landscape card is topped off with an illustration of Bryant on the left-hand side, with the patch given a regal finish.

There are a couple of even rarer parallels, while the base version is worth a four-figure fee at the highest grades.

Bryant might be finding it tough to match up to his high standards in recent years, but he’s sure to be one of the most sought-after targets when he becomes available as part of the 2021-2022 list of free agents.

While the league is protected from the worst financial worries following the Covid-19 outbreak, it could impact the contracts on offer in the next few years, so it’s hard to say where he’ll be plying his trade in 2021.

Wherever he ends up and no matter the supporting cast, the 2016 Rookie of the Year still has a lot left in the tank and could mount another World Series challenge with his impressive batting and home run records.

With so many popular prospect options, Bryant’s rookie cards are cheaper than you might expect. Take his 2013 Bowman Chrome Draft Picks Superfractors Signed RC, a one-of-one that earned a BGS 9.5 grade. It sold for $111,930, which is a record for the player.

His options from 2015 are never going to command similar prices, but they’re still solid investment pieces that are sure to retain their value over the next few years.