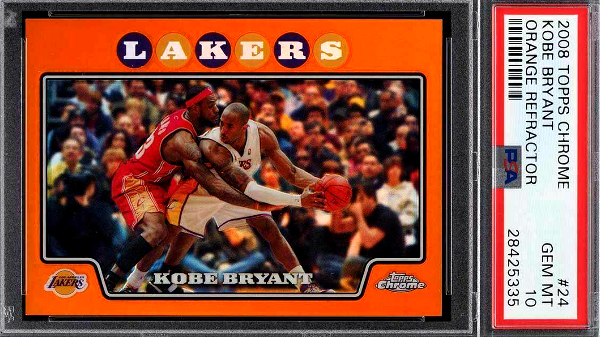 LeBron James and Kobe Bryant’s careers are masters of their craft, giants of the game of basketball. Their resumes are Hall-of-Fame-worthy:

Beyond their statistics, Kobe and LeBron are among the most culturally impactful ballers ever to grace the court. Aside from Jordan, they may be the two most culturally relevant NBA players of all time.

It’s only fitting that these two legends share space on a legendary card: the 2008-09 Kobe-LeBron Topps Chrome Orange Refractor #24, which s limited to 499 copies.

It’s not often that two legends of the game occupy space on the same beautiful, limited-print card. This card is the kind that comes along once in a blue moon.

Panini would claim exclusive NBA card rights the following year. You have to believe that the finality of this Topps Chrome set adds to this card’s appeal.

(Side note: Fanatics will take over for Panini in 2026 in an industry-rocking change of power)

While the Orange Refractor has the largest print run of the colored parallels, this specific card remains a rarity.

Vegas-style lettering defines this set’s design. The circular, multi-colored lettering is an absolutely unique look, though it may not suit every collector’s taste. It certainly works better with some cards and team color schemes than others. 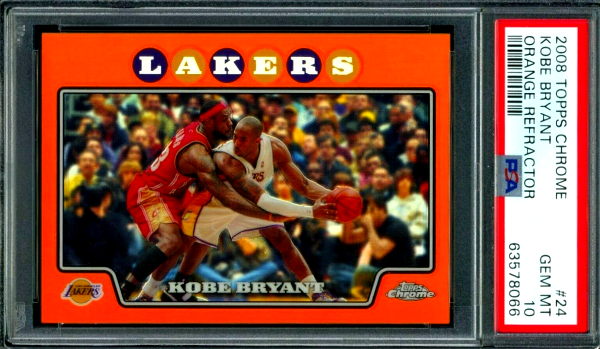 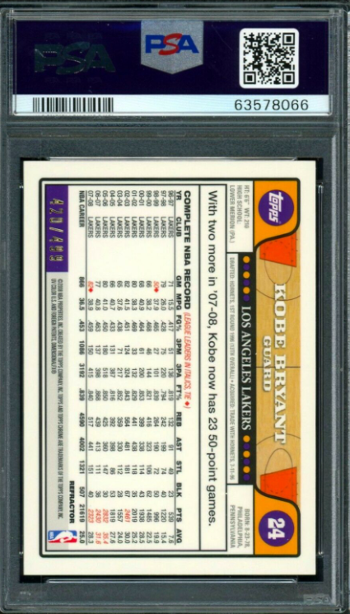 The Black Mamba extends the ball to the left side of his body, just out of the reach of James’ probing right arm. Kobe and LeBron both wear expressions of intense focus.

The clash of Bryant’s white Lakers uniform and James’ red Cavaliers threads are food for the eye. You can’t help but notice the ripples of each player’s muscle tone, reminding us that these guys are all-world athletes.

The purple-and-yellow-clad audience in the backdrop completes this iconic image—each audience member’s eyes are affixed to the greatness in front of them.

For reference, Bryant averaged nearly 27 points in his 2008-09 seasons. James averaged over 28 points, 7 rebounds, and 7 assists as a 24-year-old. These guys were both elite at the time of this card’s printing.

Topps Chrome crafted a design that would fit within bygone eras—60s, 70s, or 80s. The orange border is the most eye-catching design feature. That border envelops the image of Bryant and James.

The player image is rectangular with a tab jutting out of the bottom edge. A “Kobe Bryant” nameplate resides within that tab, signifying that this is—at its core—a Kobe Bryant card.

A small Lakers logo and Topps Chrome emblem sit in opposing indentations of the player image. The refractive sheen shines bright, especially in the silver of the “Lakers” letters.

The card’s backside adopts the retro look, too. Kobe’s stats are listed, as is the print-run indicator, a stat about Bryant’s 23 50-point games, and various other design features.

As noted, only 499 copies of the LeBron James-Kobe Bryant Topps Chrome Orange Refractor #24 exist. The card has a 35-point thickness and standard size.

How much does the 2008 Kobe Bryant Topps Chrome Refractor cost?

This is a premium offering that is well beyond the price range of casual collectors. Of course, copies graded as a 10 command significantly more than even those with a grade of 9.

With only 499 copies in existence and even fewer on the market at any given time, collectors have displayed a hunger for this card.

Limited print runs are always good for a card’s value. With only 499 copies in circulation, buyers and sellers know that there is a hard ceiling on the supply of this card.

Price points for this card to date remain strong and steady. In the long term, this is a card that has a strong store of value.

Though we would never list it as a “Pro”, there is an uncomfortable reality to face: Kobe Bryant’s untimely death has heightened demand for his cards.

Because we value balance, the “Cons” column for this card include:

It’s obvious, though, that the positive features of this car far outweigh its shortcomings. A limited print run featuring two legends as part of an extinct basketball card set? What more do you need to know?

Consider cards that are similar to this one: