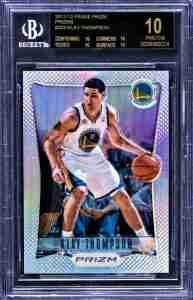 Steph Curry and Klay Thompson make up the dynamic duo known as the splash brothers on the Golden State Warriors. Everyone knows how good Steph Curry is, but casual basketball fans might not know about Klay Thompson’s greatness.

He might not be Steph Curry, but Klay Thompson is one of the greatest shooters in the history of the NBA. Through 647 career regular-season games, Klay has a three-point shooting percentage of .417.

He has completed nine NBA seasons, winning three NBA championships, appearing in five all-star games, and getting named to two All-NBA Third Teams. Additionally, he was named to the NBA All-Defensive Second Team in 2019.

Although he was not an all-star immediately, Klay had an impressive rookie season. After getting drafted 11th overall by the Golden State Warriors in 2011, he averaged 12.5 points, 2.4 rebounds, and 2.0 assists per game in 66 games.

His performance earned his selection on the NBA All-Rookie First Team. Since then, Klay has only improved and solidified himself as a future Hall of Famer.

With that in mind, Klay Thompson’s rookie cards are an interesting investment option for collectors.

Klay Thompson has several rookie cards, so it can be challenging to figure out which are the best investment options. Fortunately, we are here to help and can make the process easier for you.

Here we will look at the three best Klay Thompson rookie cards on the market and their value as investment commodities.

Although some other cards are more affordable, there are no better chrome-based basketball cards than those printed by Prizm. As a result, the first-edition cards of this collection get a lot of attention from collectors and hobbyists.

Klay Thompson’s Prizm rookie card is as iconic as they get. You can see a young Klay in the center of the card with a silver border surrounding him. He is wearing his white Warriors uniform and dribbling while protecting the ball from a defender.

Copies in close to the mint condition can sell for $5000 or more at auction. As a result, while this is a valuable card and fun to look at, it is not an attainable option for the average collector. Nonetheless, it is a great option to add to your set if you can afford it. 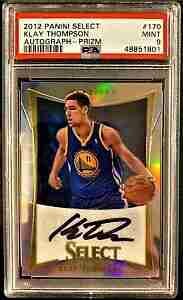 Panini has several collections they release yearly, and every set has something unique about it. Additionally, they put in the effort to release new sets from time to time. When Klay was a rookie, they released their first Select collection.

Klay’s card quickly became a fan favorite in the set and one of the most valuable options. Furthermore, only 149 copies were released, and as a result, the price got driven up even more.

The card itself features Klay Thompson in his blue Warriors uniform as he carries the ball up-court. However, what makes the card pop is the authentic autograph from Klay Thompson at the bottom.

In near-mint condition, this card can be sold for nearly $700, but in perfect condition, it can sell for even more at auction. 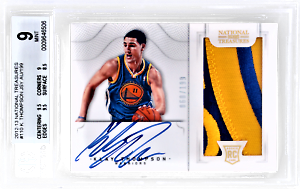 Another one of the most expensive options is the National Treasures card. Again, this card is not necessarily a great option for more budget-oriented investors, but there is no denying that it is one of Klay Thompson’s best rookie cards.

This card is a beautiful option and has a unique horizontal orientation. Klay is visible on the left side of the card, and the right side features an authentic Golden State patch. Below the image of Klay Thompson is his autograph.

Again the biggest downside to people looking to purchase this card is how expensive it is. It can sell for well over $8000 on eBay and at auctions. As a result, it is not a realistic option for many investors. However, if you can get your hands on it, it should rise in price.

We discussed this a little above, but the most valuable Klay Thompson rookie cards can sell for thousands of dollars. The more common cards can still sell for hundreds of dollars in near-mint condition.

With that in mind, we can provide you with the estimated value for a card if you contact us with two pictures of it.

Klay Thompson’s rookie cards are in an interesting spot because it has been a decade since he entered the league. As a result, there has been time for his cards to rise in value as he established himself as a Hall of Famer.

That being said, while his cards are already expensive, we expect them to continue to rise in price. Klay will be a Hall of Famer, and as a result, they should have longevity. We expect his cards to steadily rise in value over time like a mutual fund.

Additionally, Thompson is one of the most likable players in the NBA, so more people will be interested in purchasing his cards.

When Was Klay Thompson a Rookie?

Was Klay Thompson the Rookie of the Year?

Most people consider his Prizm card to be the most desirable option.