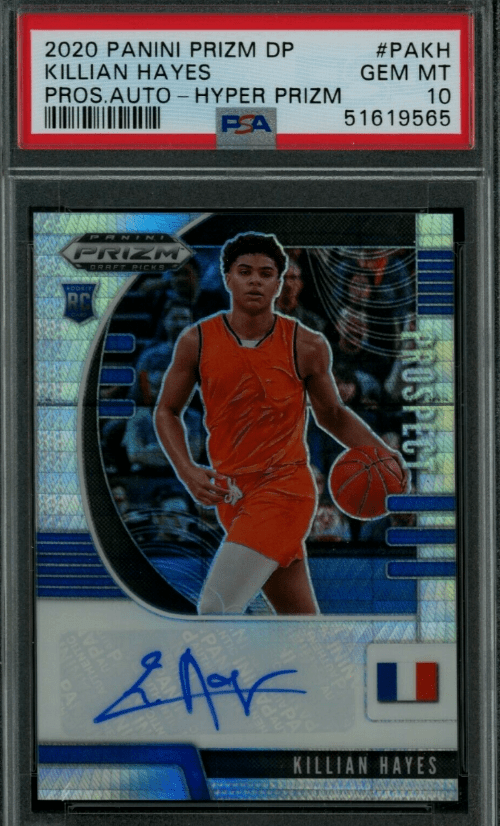 Killian Hayes (07/27/01) is a French-American point guard/shooting guard who currently plays for the Detroit Pistons. He earned a Gold medal and the MVP award with France at the 2017 FIBA U16 European Championship and led his team to a silver medal at the 2018 FIBA Under-17 World Cup.

He’s seen as one of the better rookies from the 2020 class, so we’ve come up with a list containing three of the best Killian Hayes RC options as of right now.

“There are a couple of cards which have been early leaders in terms of values and overall interest.”

We’ve listed them both below, along with a third option which has good potential from an investment perspective. 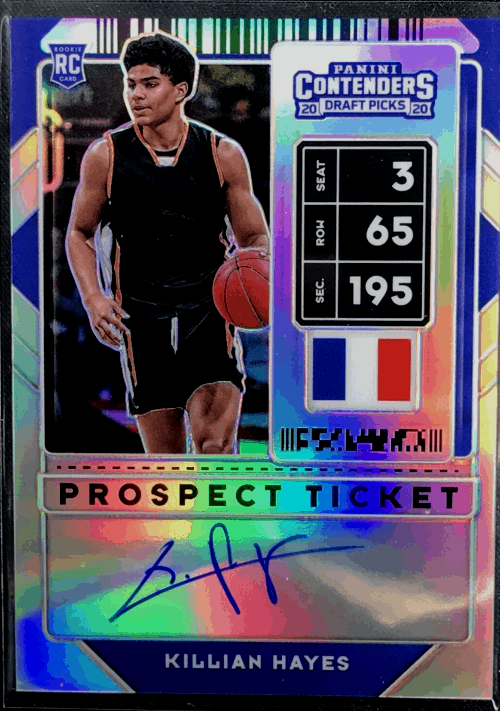 Hayes’ 2021 Panini Contenders is the first card to make the list, as part of the Prospect Ticket subset. Somewhat confusingly, there are a couple of image variations, along with the parallels we’ve listed below. The player will be found in either a black or orange jersey depending on the version, making it easy to tell the difference.

There’s a large on-card auto found at the bottom, which is the main selling point, and it follows a typical Prospect Ticket design. There’s also a French flag rather than any NBA logos, as he had yet to sign for a team upon release. 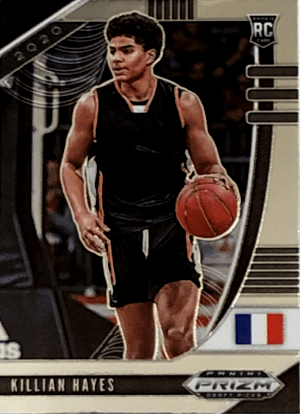 The 2020-21 Prizm Draft Picks is next up, with heaps of rare parallels and a stickered auto at the base. It features a large lined image of Hayes with a ball in one hand, while the background color will change depending on which version you’re looking at.

Another card unfortunately lacking in terms of NBA branding, it’s still one of the better Hayes RCs on the market. There are 31 parallels overall, which makes it interesting for those who want to chase the rainbow. 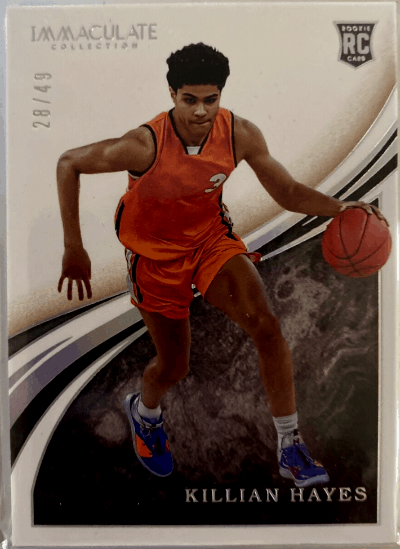 The final card to make the list is Hayes’ 2020 Immaculate Collegiate edition. He’s found in a base set that is limited to three rare parallels. Rather than focusing on his move to the NBA, it’s an ‘international’ version, so the player is found in the orange jersey that is also seen in the cards above.

We’d look to the Gold parallel, which has a print run of 20 copies. The card is finished in gold trim, and while it’s true that there’s no autograph, it’s still one of the more affordable editions to make the list.

If you would like an estimated value of a Killian Hayes rookie card please email us at value@goldcardauctions.com.

Hayes has struggled so far, despite being handed a number of big changes during the early stages of his NBA career. For example, he recently posted a disappointing five points (2-5 FG, 1-2 3PT), one rebound, four assists, and two turnovers in 24 minutes during the Piston’s loss to the Celtics.

Having scored just five points over his last three games and only two steals over the season, it looks like he might not be ready just yet.

“However, that means that his RCs are likely to dip ever so slightly, as the market readjusts to the fact that he’s unlikely to be in the running for Rookie of the Year honours.”

On the other hand, it would be wrong to write him off after just five games, and he obviously needs time to adjust to the best league in the world. Having said that we are not buyers and will be watchers until proven otherwise.