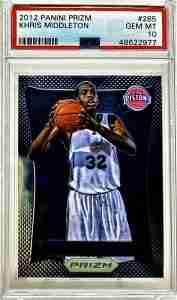 Khris Middleton is a basketball player for the Milwaukee Bucks. He is the second-best player on the team behind Giannis Antetokounmpo, and the two of them have formed one of the best dynamic duos in the NBA.

In his career, Middleton has made three NBA All-Star games, and he won an NBA Championship in 2021. His efficiency as a three-point shooter has complimented Giannis well and led to his success.

However, Khris Middleton was not always expected to be a star in the NBA. Instead, he came from rather humble beginnings as a second-round pick. It’s true, this all-star and champion was the 39th overall pick in the 2012 draft.

As a rookie, Middleton did not play much, appearing in only 27 games. In those games, he averaged just 6.1 points, 1.9 rebounds, and 1.0 assists. He spent most of the year in the G League.

However, he was traded to the Bucks that off-season in a package for Brandon Jennings, and the rest is history. Middleton developed into an all-star caliber player, and he should be successful for years to come.

Since he is not a massive name in the NBA, his cards are still reasonably priced, and as a result, investors should consider purchasing them.

Middleton was not a star in his rookie year, and as a result, he was not included in as many collections. However, there are still several Khris Middleton rookie cards available for purchase.

Here we will be looking at three cards that we think are worthy of adding to your collection.

The Prizm collection is one that collectors look forward to every year. When the set is released it features all of the best players in the NBA, including rookies. If you know what you are doing, you can find some gems.

People that invested in Khris Middleton’s rookie card back in 2012 would have made a pretty penny by now as he was not expected to grow into the player he is today.

The card is simple, featuring Middleton in his white Pistons uniform with the ball. However, simplicity is sometimes best, which is why this card is considered by most to be the top Khris Middleton rookie card. 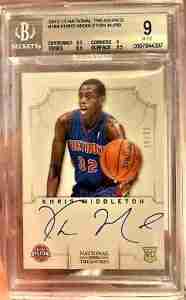 National Treasures is another popular distributor that puts out high-end trading cards. This Khris Middleton rookie card is amongst the most valuable options for several reasons. It has a slick design with a clear picture.

However, the thing that makes the card stand out is that it comes with an authenticated autograph.

You can turn over the card and read a short blurb about Middleton’s career at Texas A&M and what scouts thought of him. Additionally, you can see his stats from his rookie season. 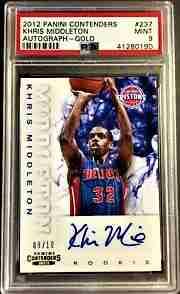 The final card we want to look at today is from the Panini Contenders collection. This card had a short run, and as a result, only 10 copies were printed. Its short run has led to a significant escalation in its pricing.

The card itself features Middleton taking a jump shot in his blue Pistons jersey. His name is written vertically on the left side of the card, and below that, you can see which of the 10 cards it is.

Finally, the bottom of the card features Khris Middleton’s autograph. The autograph has been authenticated.

The cards that have a limited number of copies like the National Treasures and Contenders cards listed above can reach four figures in price. However, the other cards are still very reasonably priced.

Khris Middleton is not a household name despite his ability, and as a result, cards like his Prizm card can be had for a few hundred dollars. Cards from less popular collections can be purchased for well under $100.

If you have a Khris Middleton rookie card and you want to know its value, leave a comment below with two pictures of it. We will get back to you as soon as possible! 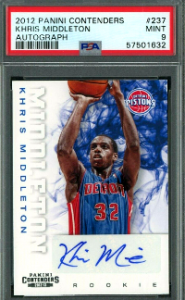 Middleton’s cards are hidden gems that just waiting to explode in value. While they will never reach the heights of the cards of NBA legends, there is hidden value here.

Middleton is a great player and will play with Giannis Antetokounmpo for many more years. The two of them will have several chances to add more NBA Championships to their resume.

If the Bucks win a few more championships, Middleton could start to be looked at like Klay Thompson behind Steph Curry. As a result, we think investing in his rookie cards is a great idea.

When Was Khris Middleton a Rookie?

Khris Middleton was a Rookie in the 2011-12 season for the Detroit Pistons.

When Was Khris Middleton Drafted?

Khris Middleton was drafted in the second round, 39th overall by the Detroit Pistons.

When Did Middleton Get Traded to the Bucks?

In the off-season following his rookie year, Khris Middleton was traded to the Bucks in a package for Brandon Jennings. He played his first full-season with the Bucks that year.