Kevin Love (09/07/88) is a five-time All-Star who won an NBA championship with the Cavs in 2016. He was originally a first-round pick for the Memphis Grizzlies, before being traded to the Minnesota Timberwolves on draft night in a deal involving O. J. Mayo.

The most improved player in 2011, he earned a championship ring with the Cleveland Cavaliers in 2015-16, ending a 52-year major sports championship drought in the city.

Here’s a list with three top Kevin Love rookie cards, as well as an investment outlook looking at the next few years of his career.

There are almost 30 Kevin Love RCs on the market, split evenly between premium and budget options. For the purposes of this list, we’re going to be looking at the best cards on the market that are popular with collectors.

We’d advise to keep an eye out for the best-graded versions whenever possible. 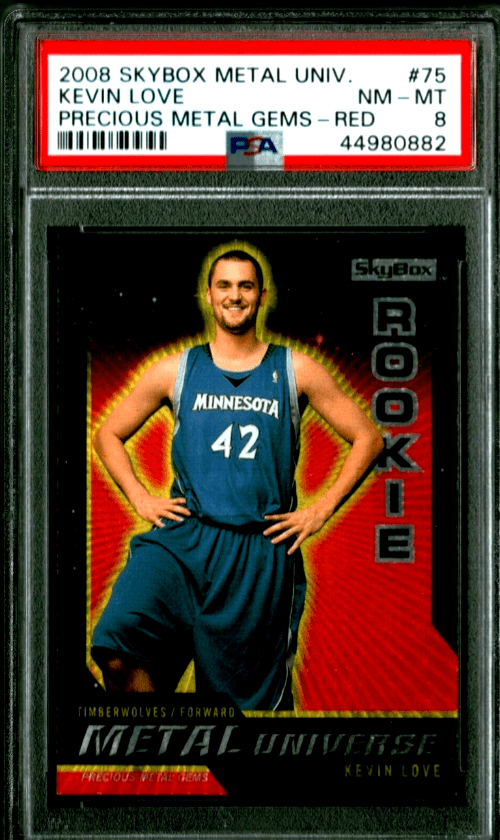 The base version of Love’s 2008-09 SkyBox Precious Metal Gems card features a full-colour image of the player in action with the background appearing in grey scale. Love is found with his hands on his hips, smiling at the camera. In case you weren’t sure, large text on the side notes him as a rookie.

As a PMG card, most of the attention is given to the rare coloured parallels. These come in either Green or Red, and change the background accordingly. They’re both hyper-rare, and exceedingly expensive when looking at copies that have achieved a high grade. 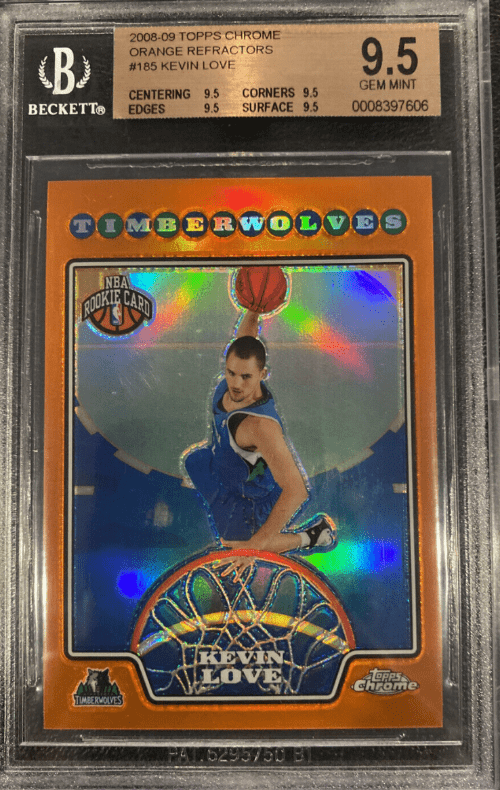 One of 40 rookies from the 2008-09 Topps Chrome set, the Orange parallel can sell for a hefty price tag if you’re looking at gem mint copies. Love’s card is shot from the perspective of the net, with the player leaping up to dunk with a ball held in one hand.

It has a shiny chrome finish, while the orange background compliments the rim design. You’ll also find an ‘NBA Rookie Card’ logo at the top. While it may not have as many parallels as modern editions, it’s one of the better Love RCs on the market. The chrome makes it highly condition sensitive, especially when looking at the surface and the corners. 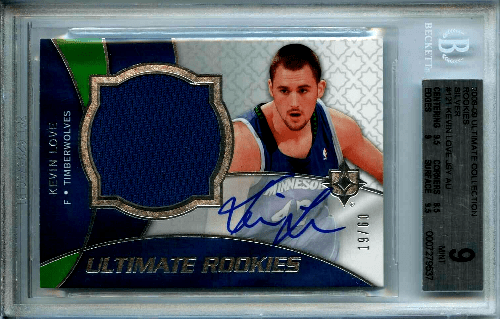 Last up is Love’s 2008-09 UD Ultimate Collection RC. With a player patch, an on-card auto, and just 60 copies overall, it’s surprising to find that it’s one of the more affordable options to make it onto the list.

A close-up of Love is found on the top right, with a generous player patch taking up most of the real estate. The auto is found on a separate segment at the bottom, filled in blue ink. Be aware; it comes with a silver chrome finish, which will scratch easily.

If you have a Kevin Love basketball card and would like an estimated value please email us at value@goldcardauctions. Please include 2 photos at a minimum.

Love is sure to make it into the Hall of Fame, having won it all over the last decade. The Cavs forward is still in great form, having averaged 17.6 points per game along with hitting 37.4 percent of a career-high 7.0 three-point attempts per outing in 2019-20. At 32, he still has time on his side.

Whether it be jersey pieces or rare parallels, there are a number of Love RCs that could be great for investment purposes. Of the cards to make the list, the PMGs are clearly the most expensive overall. However, the Topps Chrome Orange parallel is also coveted, while you can’t go wrong with a signed UD patch.

They’re best seen as a long-term investment, which should be left alone until Love’s retirement, and subsequent entry into the HoF. Prices are likely to rise in the meantime, making it a no-brainer if you’re willing to be patient.