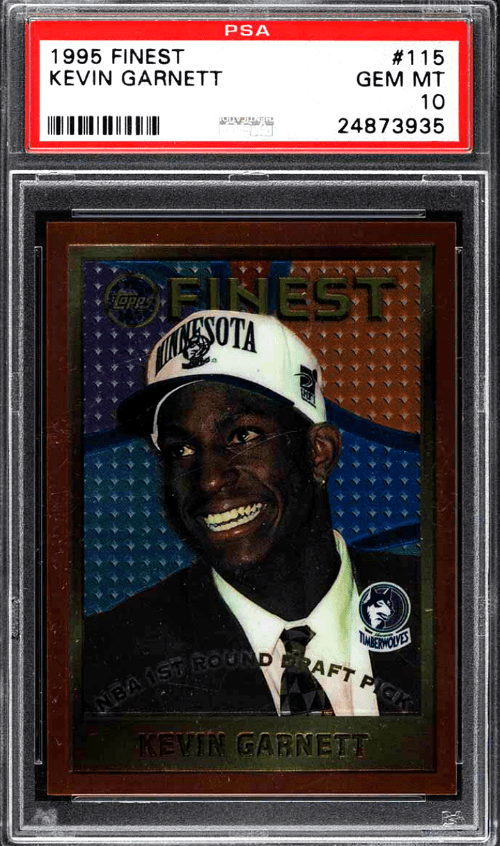 He played Center, Power Forward, and Small Forward in the NBA and stood 6-11 and weighed in at 240lbs. Teams included the Minnesota Timberwolves (14 seasons), Boston Celtics (6 seasons – NBA Title 2008), and the Brooklyn Nets (2 seasons).

Garnett can be found on Twitter at KevinGarnett5KG and nicknames include “KG”, “The Big Ticket”, and of course “The Kid”.

Let’s take a look at the best KG rookie cards for investment purposes.

Here is the most popular KG rookie card and most likely the best in terms of ROI for investment purposes.

The card is numbered #115 and shows KG on NBA draft night with a smile from ear to ear while repping a T-Wolves hat.

His name (Kevin Garnett) is centered at the bottom of the card and the Minnesota Timberwolves Logo is placed towards the bottom right. 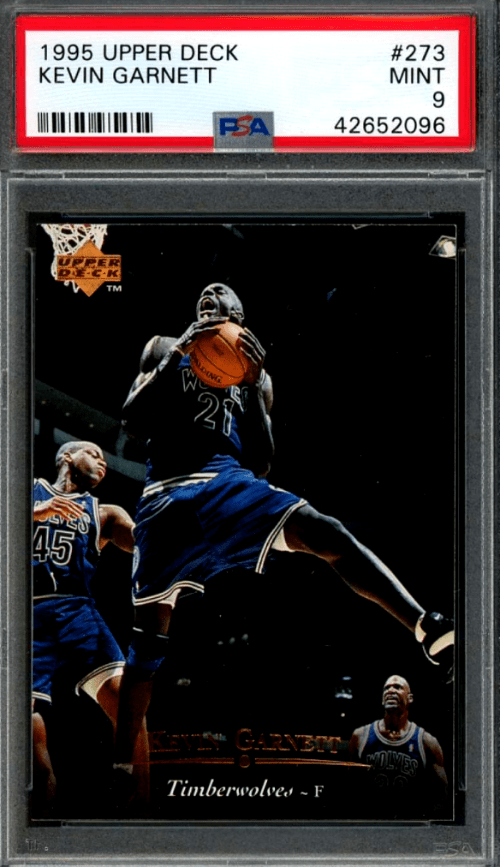 Here is the popular KG Upper Deck rookie card and is a great option for those looking to get in on a Garnett RC without spending hundreds of dollars.

The card is numbered #273 and shows KG flying through the sky after nabbing the rock off the rim.

His name (Kevin Garnett), team name (Timberwolves), and position (F) is centered at the bottom of the card while the Upper Deck Logo is placed in the top right-hand corner. 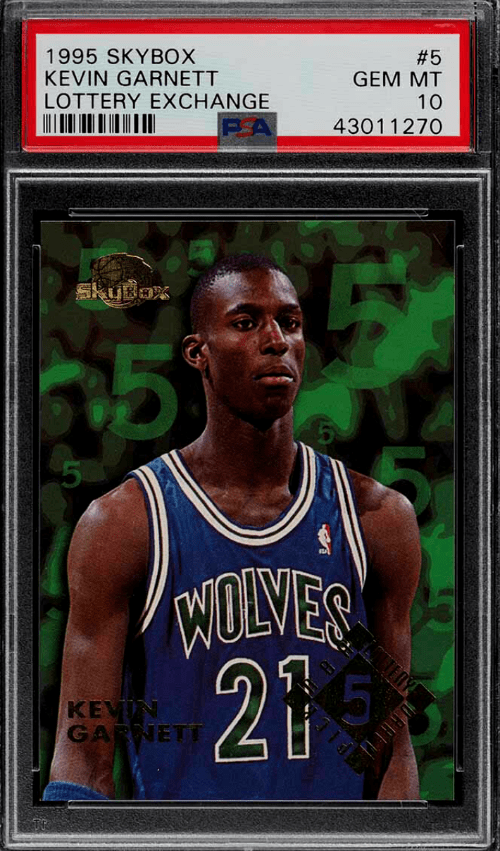 When it comes to the Kevin Garnett Skybox rookie card there are a few versions to pick from but we prefer the most classic looking for the bunch (in our opinion) in the 1995 KG Skybox Lottery Exchange rookie card.

Numbered #5 the card shows KG with a not so happy look on his face while sporting his purple T-Wolves 21 jersey.

Must Read: Most Valuable Basketball Cards From the 1990s 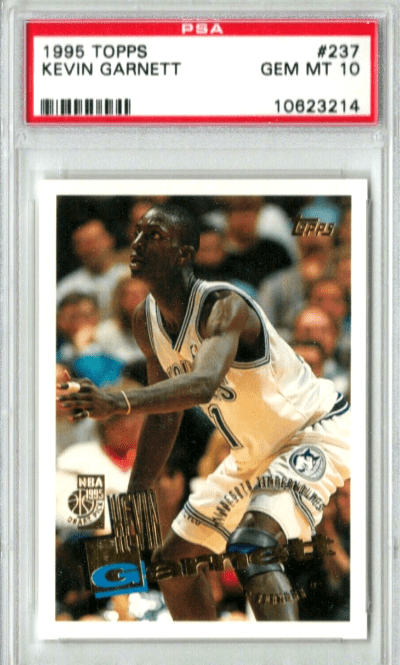 The Topps brand really never got deep into the basketball card game and judging by the looks of the KG Topps rookie card we can see why.

Topps is usually known for a high-end, classic design but that is anything but with this card. The Topps logo in the top right-hand corner is fine but then when you look towards the bottom of the card you really have to wonder what Topps was thinking with the name/team design… it looks like a couple of 8-year-olds came up with the concept. 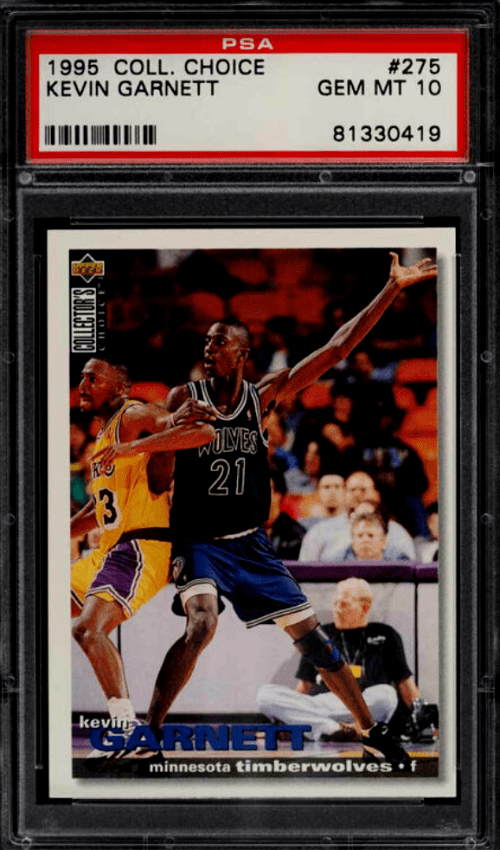 The last KG rookie card on our list is the 1995 Collector’s Choice by Upper Deck. Here is another SOLID Garnett rookie card by UD showing KG calling for the rock while imposing his will on some helpless Lakers defender. 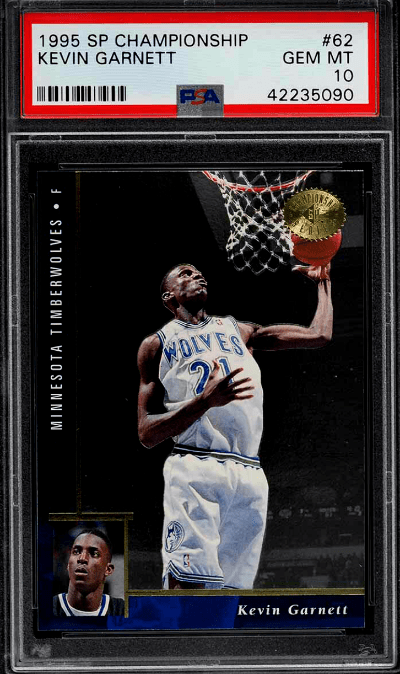 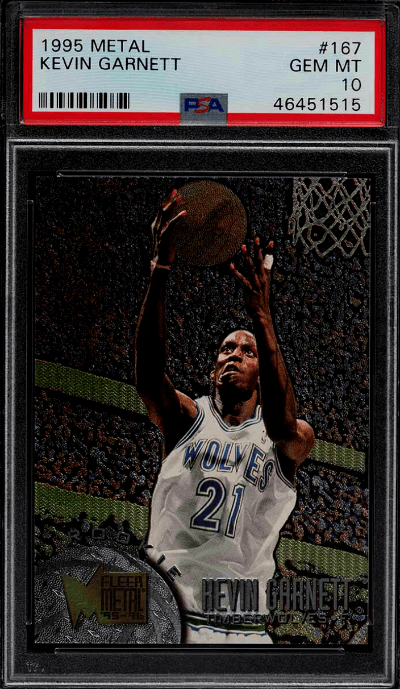 We do not foresee any major movements (up or down) in the price of Kevin Garnett rookie cards over the next 10 to 15 years.

The most expensive (and most popular) Kevin Garnett rookie card is the 1995 FINEST #115 with all others fairly far behind.

Please DM us on the Gold Card Auctions Facebook Page if you would like advice in regards to buying a KG RC… cheers!

Kevin Garnett (aka KG) had one hell of a basketball career but only got one title out of it… but hey at least he didn’t pull a Dan Marino… OUCH… sorry Dan. If he would have just won one another title or two he might have made it into the NBA Top 10 of all-time.

Besides winning an NBA title in 2008 he also won an Olympic Gold Medal in 2000 and was named the NBA MVP in 2004. Other notable achievements include being a 15 time NBA All-Star, NBA Defensive Player of the Year in 2008, and a 9 time All-NBA Selection.

Judging from the above you might guess we are recommending KG rookie cards to long-term investors.