Without a doubt, Brooklyn Nets forward Kevin Durant is one of the best players in NBA history.

Durant was born on 9/29/88 in Washington, D.C. He graduated from Montrose Christian School in Rockville, MD.

Durant played one season for the Texas Longhorns. He averaged 25.8 points, 11.1 rebounds, and 1.3 assists. After guiding the Longhorns to a 25-10 record, he earned unanimous National Player of the Year honors. He declared for the NBA Draft after his freshman year.

Durant signed with the Golden State Warriors in free agency in 2016. Durant, Stephen Curry, and Klay Thompson were a formidable trio which helped the Warriors win the NBA title in 2017 and 2018. Durant was the NBA Finals MVP on both occasions. 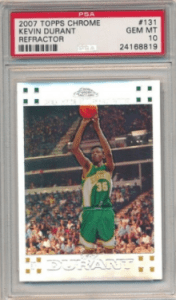 The back of the card reads, “Kevin wasted no time outshining some of the NBA’s brightest stars by putting on a dazzling display at the preseason Team USA minicamp, months before his NBA debut. ‘I think he missed only three or four shots in the last two days,’ Team USA tri-captain Carmelo Anthony said of Durant. ‘So I’m pretty sure he’s impressing a lot people around here.’” 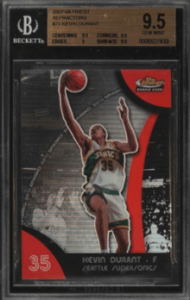 Here’s another KD refractor rookie card which is worth your while. 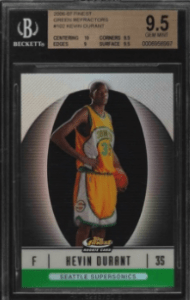 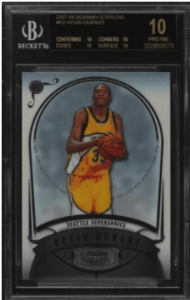 Here’s a top-of-the-line KD rookie card you must include in your collection. Bear in mind this is a Black Label card – a card which garnered a perfect score in every criterion. It just doesn’t get any better than that.

The back of the card reads, “Kevin’s brilliance at hoops hotbed Oak Hill Academy earned him ‘must-watch’ buzz – and a McDonald’s All-American bid – before he ever took the floor at Texas. When Durant became the first freshman ever to be named National Player of the Year after his lights-out ’06-07, that buzz became a deafening din.” 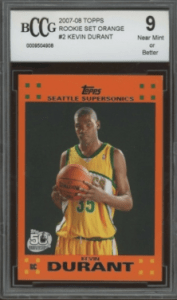 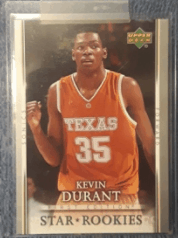 This is a good option if you’re after a college-based KD rookie card. It’s also great for the casual card collector. The front of the card shows KD clinching his fist in his orange Texas Longhorns jersey.

The back of the card reads, “As close to a complete player there was in this year’s NBA Draft, Durant’s defensive capabilities are overshadowed by his incredible offensive skills. He cranked out 37 points, 10 boards, and a career-high six blocks against Kansas in the Big 12 Conference Tournament finish.”

It isn’t hard to imaging Kevin Durant becoming a member of the Naismith Memorial Basketball Hall of Fame someday. He’s one of the most phenomenal scorers in the history of the game.

Plus, his glowing resume speaks for itself: He’s a former NBA Rookie of the Year, a former NBA MVP, a two-time NBA champion, a two-time NBA Finals MVP, a 10-time NBA All-Star, and a six-time All-NBA First Team selection. Let’s not forget he also won a gold medal with Team USA in the 2012 and 2016 Summer Olympics.