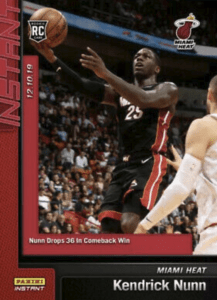 He’s one of the leading candidates for Rookie of the Year, and it’s caused interest in his cards to increase rapidly in recent months. The problem is, he only has one as of December 2019, likely a victim of the immediacy of his recent success.

Here’s everything you need to know if you want to grab a Nunn rookie card, as well as an investment outlook for the future.

The first (and only) Kendrick Nunn rookie card on the market, the normal version of the Panini Instant can be found for roughly $100 at auction.

The front of the red and black card has an image of Nunn continuing “his hot start”, wearing his Miami Heat jersey as he moves along the court. There’s an RC logo on the top left, along with a team logo on the other side.

The reverse talks up his strong start to the 2019-20 season, including leading his Heat team to a 131-126 victory over the Bucks in October. There’s also a team logo at the top of the card.

Check back for updates as more Nunn cards are sure to come if he keeps this up!

You won’t be able to find a signed copy as of now, arguably because they didn’t think he’d have such an important role to fill when he first joined. The fact that he was undrafted doesn’t help, but it does make it easier if you just want to add a Nunn rookie card to your collection.

As usual, rare editions increase the price drastically, with a green variant proving to be especially popular at auction. One recently sold for $360, with a black version selling for $625.

Nunn wasn’t supposed to have such a large impact in such a short space of time. He was ranked 61st in the 2013 class by ESPN, showing just how far he’s gone to exceed expectations during a strong end to 2019.

In a way, he’s lucky that the Heat entered this season hard-capped, which made it difficult to bring in extra talent. Nunn was a budget option, but he’s gone on to prove that he can mix it with the very best in the business. He has been hot and cold at times, but it’s nothing you wouldn’t expect from a young player in his first real season.

His lack of a signed rookie card is a shame, but interest is expected to rise if he continues his meteoric rise in the NBA. His team is midway through December with a 19-7 record, but much depends on whether he can be more consistent in the future.

For now, there’s only one card on the market, and it’s more affordable than you might have expected. Nunn’s original option is a great choice, while prices will likely explode if he manages to snatch the Rookie of the Year award ahead of Ja Morant.