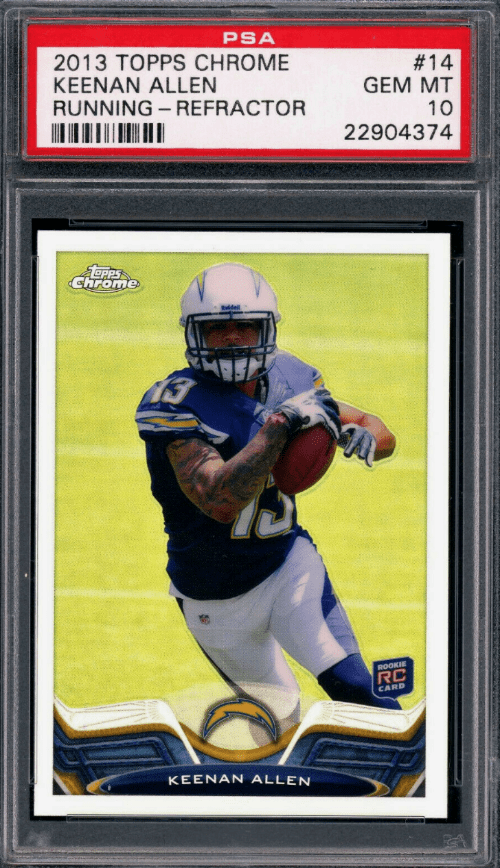 Keenan Allen was drafted in the 3rd round of the 2013 NFL Draft (view all 7 rounds) as the 76th overall pick by the former San Diego Chargers (now Los Angeles Chargers). He has stuck with the Chargers through their move to Los Angeles and has spent his whole career so far with them.

Allen took some time to get going in his rookie season, but after he did, he never looked back and is now a 3-time Pro Bowler and rated as one of the best wide receivers in the NFL.

It took a few injuries for Allen to be given his chance for the Chargers, but when he got the opportunity, he immediately showed what he was made of.

Allen ended his rookie season with 71 receptions for over 1,000 yards and 8 touchdowns. This was the highest yardage of any rookie and was named the Pepsi Rookie of the Year.

Without further ado here are the best Keenan Allen RCs from an investment standpoint. 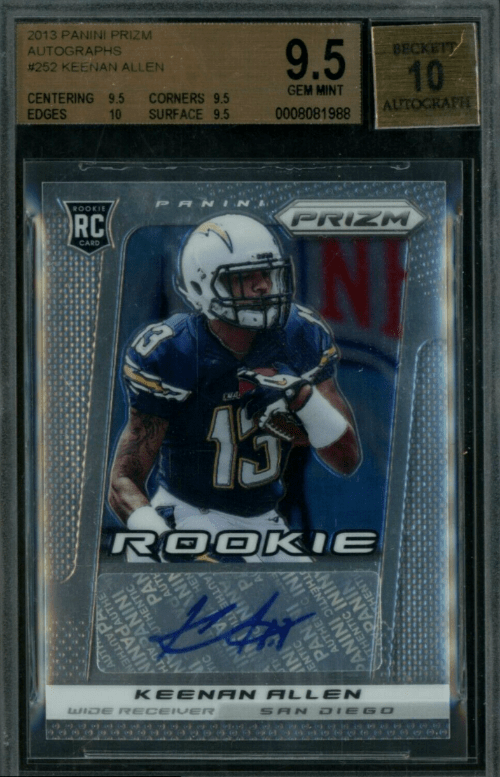 A collection is not complete without owning a valuable Panini Prizm card, or 10. The Allen version is a great option and features him with the ball in hand, presumably during a catch and run, in Chargers uniform. The design is nice, but the slightly diagonal printing can be off-putting.

The base version can be picked up for a reasonable price, but as usual with Prizm, there is a slew of rarer parallels that can go for very high amounts of money.

Another staple card for any collector, this one again features Allen running with the ball in hand. The border changes color depending on the parallel and the bottom features a nice picture frame style that features information such as the team and player name.

But there are also a lot of rarer parallels that are a good option for collectors wanting a more valuable piece. 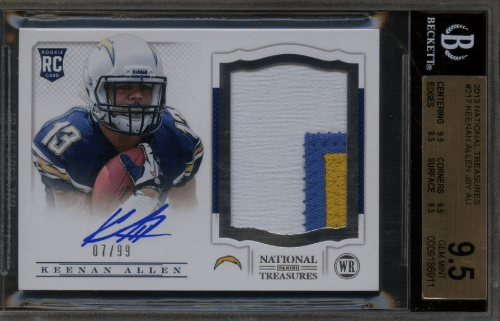 Another card featuring Allen with the ball in hand, this one is horizontally printed with him on the left just above the on-card autograph. To the right is a very big patch from his Chargers uniform. It features the usual whitewash National Treasures background.

There were just 99 of these cards made and they are serial numbered on the front. This is undoubtedly the best Keenan Allen card available, but that also makes it the most expensive so be ready to dig deep into your pockets if you want it! 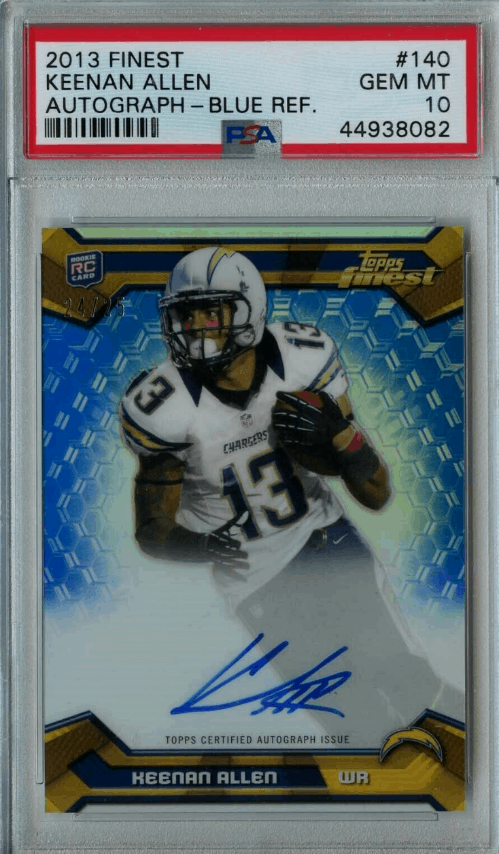 The most expensive Keenan Allen rookie cards are his 2013 National Treasure RC and the 2013 Topps Finest Refractors at high grades (i.e. PSA 10 or BGS 9.5).

If you are looking to purchase a Keenan Allen football card but need advice please email us at advice@goldcardauctions.com and we will help.

Kennan Allen is one of the Chargers’ most reliable offensive players and is widely regarded as one of the NFL’s premium wide receivers.

Having played in the Pro Bowl 3 times already, his rookie card value already reflects this.

Although if the value of these cards is really going to shoot through the roof and become a great investment, the Chargers will have to put together a few deep playoff runs and eventually make it to the SB or at minimum AFC Championship Game.

Bottom line… Kennan is now paired with one of the best young QBs in the game and hence he (and his RCs) have a real shot at stardom over the next few years… Kennan Allen cards are somewhat of a sneaky sleeper play if you feel Herbert is the real deal and can take the Chargers to the promised land (which many do).