Kawhi Leonard (06/29/91) is a four-time All-Star who has won the NBA Championship with both the San Antonio Spurs and the Toronto Raptors. Currently signed to the LA Clippers, he’s one of the best two-way players in the game.

A notoriously quiet player, Leonard prefers to do his talking on the court and was recently named as the 2020 NBA All-Star MVP.

We’ve prepared the ultimate guide for your Kawhi Leonard rookie card needs, including values, a checklist, and three great RC options to keep an eye out for.

According to recent auction data, we’ve come up with a trio of the most popular Kawhi Leonard rookie cards. 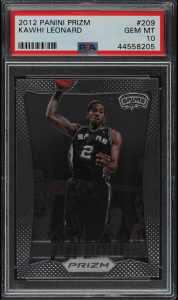 His 2012 Panini Prizm card (read Panini Redemption Panic) is a must-have for any serious collector. There are fewer parallels than you’d find with a more recent set, which also makes them more valuable.

A PSA 10 grade went for $339, amassing 84 bids along the way at a recent auction. As well as an image of Leonard minus the legendary Prizm background, the reverse quote notes;

“There’s something to be said for a rookie who can gain the confidence of no-nonsense Spurs coach Greg Popovich, but that’s just what the team’s top pick did in 2011-12. A strong contributor on both ends of the floor, Leonard was rewarded with starting nods in all 14 of San Antonio’s playoff contests.” 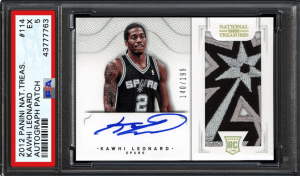 “Leonard, a Second-Team All-American, racked up 40 double-doubles in 70 career games, including 23 in 2010-11. That double-double total was second in San Diego State history behind Michael Cage (60), who played four seasons to Leonard’s two. Leonard also matched Cage for the most in a single season (23).” 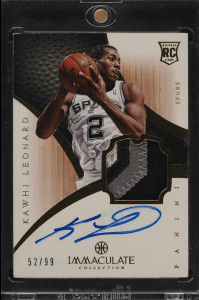 Leonard’s 2012 Immaculate Collection has just 99 copies, and will easily sell for four figures. For example, an ungraded version with corner damage still sold for $1,450, attracting 59 bids.

Similarly to the card above, there’s an on-card signature and a rookie patch which make it alluring for prospective buyers, while there’s also a Jumbo patch edition and the following parallels;

Despite sidestepping the San Antonio Spurs to join the Toronto Raptors unexpectedly in 2019, Leonard managed to lead the latter to the NBA Finals and won a coveted second title. As such, his high-end rookie card prices have exploded over the last few years (not unlike LeBron James Rookie Cards).

There’s clear scope for massive profits if you can afford to add a copy or two to your personal collection, especially so if you’re able to capitalize before values go up further.

With a wide range in terms of his card values, there’s something for everyone.

Many of his cards can be found for next to nothing, but there are also expensive options that almost every collector will covet. 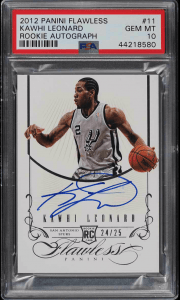 Leonard has always had the talent, and the addition of a second NBA Championship win was an event that few saw coming.

After all, he was injured for the majority of the 2017-18 season and left the Spurs in a trade following disagreements that stemmed from his rehabilitation methods.

As one of the quieter stars in the NBA, he’s unlikely to court controversy with off-field actions, and there’s always a chance that he’ll be able to add more championships as he enters the prime of his career.

He’s also sure to enter the Hall of Fame, which will further increase his RC prices.

Any of the three rookie cards we’ve listed are a sure bet if you’re hoping to invest, although the best time to get involved would have been back in 2017.

Even now, you wouldn’t want to miss out if they continue to rise at a similar rate over the next few years.