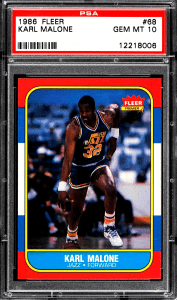 Shop for the Karl Malone Fleer Rookie Card on eBay

Karl “The Mailman” Malone (24/7/63) is a retired power forward who spent 18 seasons with the Utah Jazz, before ending his career with the Lakers.

A two-time MVP and a 14-time All-Star, the lack of an NBA Championship surely makes him one of the greatest players to never win a ring.

Here’s everything you need to know about Malone’s rookie cards, with alternative options, and an investment report which looks at the next few years.

Malone only has one rookie card of note, hailing from 1986. He had already signed for the Jazz by then, as the 13th pick in the 1985 draft.

Given the lack of RC options, we’ve also listed one of the most popular alternatives you’ll find at auction below.

The 1986 Fleer is by far the most popular Malone RC for a number of reasons. Most importantly, it’s his only ‘true’ rookie card, and it’s part of one of the most famous sets in the hobby.

Malone is featured in his Jazz jersey, mid-dribble, while the old team logo is a great nostalgic throwback.

However, you can hardly see the ball in the image, giving the impression that he’s dribbling air.

Legends like Michael Jordan and Charles Barkley are just a couple of the big names that also have rookie cards in the ‘86 Fleer set, adding more interest, while the brand has great name value.

Of course, Malone’s 1986 Fleer card is never going to be worth anywhere near the equivalent Michael Jordan RC, probably because their rivalry ended with the former recording two consecutive NBA Finals wins over Malone’s Jazz. (Malone’s card is still the second-most valuable overall, which is no mean feat.)

One notable flaw is the reverse which only lists basic info, while centering issues are typical with many cards from the era.

As the corners are solid red, you’ll be able to spot chipping almost immediately, so it struggles to earn high grades. 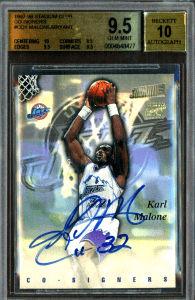 Released a decade later, this signed option clearly isn’t a rookie card of any description.

However, the 1997-98 Topps Stadium Club Co-Signers does feature a Kobe Bryant autograph, making it even more valuable than the 1986 Fleer if you’re looking at mint versions.

Rather than splitting the card in half, one full side is donated to an image of the respective player, with on-card autos taking over the middle.

As well as Malone dunking for the Jazz, there’s an iconic image of Kobe dribbling in his famous Lakers jersey.

From an investment perspective, it’s an interesting piece, with a pair of strong autos from two of the biggest stars to grace the sport.

Since Bryant’s untimely passing in 2020, the value of his memorabilia has shot up in price accordingly.

Since there is only one Karl Malone rookie card lets take a look at some of the recent prices to get a feel for the value of the card.

Malone was known as the “The Mailman” because of his incredible consistency, but it was sometimes hard to shine when you’re up against a phenom like MJ.

Then there’s his alleged relationship with a minor from over three decades ago, which is still brought up by various websites and publications at least once every fortnight.

In recent months, his decision to decline to take part in The Last Dance was attributed to the feelings of regret many Jazz players still feel when looking back at their losses, but he should feel no shame.

Malone is still a certified legend in the game, and his career reflects the sum of his talents.

His rookie memorabilia is great for entry-level investors, and it’s not like his Fleer card has failed to pick up in price compared to the majority of the others in the set.

Malone caught the nation’s imagination for the most part, he was just unlucky to play in direct competition with one of the greatest ever.

Given the issues that can be found with his Fleer RC, it’s worth taking the time to find versions with a PSA grade of 8.5 or above, which takes the value into the low three-figure range. (A PSA 10 is worth several times more, and is highly coveted.)

The lack of signed versions is one issue for hobbyists and collectors, which is why options like the Kobe card are decent alternatives.

With just one true RC, you know what to look for, and it’s unlikely to fall away anytime soon.

Karl Malone is a legend, with a great rookie card that could be a great investment piece in the long-term. For more great ideas, check out our list with the top 20 basketball cards of all time, or the best sports cards to buy right now!