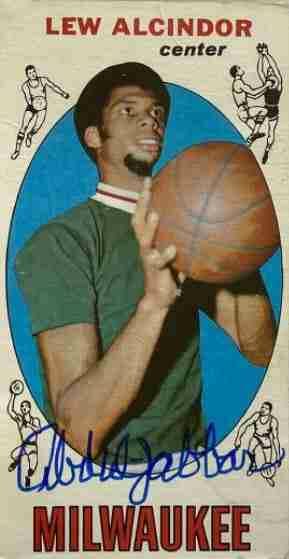 Kareem Abdul-Jabbar is not usually in the GOAT debate in the NBA, as it is usually restricted to Michael Jordan and LeBron James, and rightfully so.

Most analysts consider them the two best players to lace up in the NBA. However, a few other players could be in the conversation. One of those players is Kareem Abdul-Jabbar.

Kareem Abdul-Jabbar played 20 seasons in the MBA for the Milwaukee Bucks and Los Angeles Lakers. He is a six-time NBA champion, winning once with the Bucks and five times with the Lakers.

Additionally, he was the Finals MVP twice and the NBA MVP six times. Abdul-Jabbar was also an all-star in all but one of his seasons.

Perhaps the most impressive achievement Abdul-Jabbar has is that he is the NBA’s all-time scoring leader.

His looked at by many as the most significant center in the game’s history.

Furthermore, Kareem Abdul-Jabbar was a great defensive player. He was named to one of the NBA’s two defensive teams on 11 occasions total.

He was also the NBA blocks leader four times. Finally, Abdul-Jabbar led the league in rebounds once.

With all that in mind, it should be no surprise to hear that Kareem Abdul-Jabbar has some of the most valuable rookie cards in basketball.

He is a legend and played at a time when trading cards were not as widespread. As a result, there are fewer copies.

Before we get started there are a few things we need to discuss. Firstly, Kareem Abdul-Jabbar had a different name at birth, Lew Alcindor.

He changed his name at age 24, and as a result, his rookie cards show his birth name. Additionally, trading cards were not made by as many companies at the time. As a result, we will dip into second-year cards to wrap up our list.

The card shows Kareem Abdul Jabbar’s birth name at the top of the card, and below it says “center” to indicate his position.

Below that there is a large close-up of the player holding the ball. Cartoon images of basketball players surround him in each of the four corners of the card.

Finally, the bottom of the card reads Milwaukee to indicate his team. While the card size is not necessarily relevant, it is more susceptible to wear and tear.

The size of the card and the fact that more than 50 years have passed since their release means very few mint-condition copies are left in circulation.

Additionally, centering and print defects are common in cards of this age. This card’s estimated PSA 8 value is $3000, but they have sold for much more in the past.

This is, without a doubt, the premier Kareem Abdul-Jabbar rookie card.

This is the only other card that could be considered a rookie card for Kareem Abdul-Jabbar.

One Topps ruler was inserted into every pack of the 1969 collection, and it had to be folded three times to fit into the pack.

The rulers are made of paper and are blank on the back. Additionally, these cards are very rare and are especially hard to find in good condition.

Their shape, age, and packaging caused them to become brittle with age.

The two cards listed above are the only rookie cards made for Kareem Abdul-Jabbar.

So, we are going to look at a second-year card of his. Also released by Topps, this card is valued at $186 when in PSA 8 condition.

Like the rookie card, Kareem is in his green Bucks warm-up shirt. He is holding the basketball forward; in it, you can read his birth name, position, and team.

This gives the card a unique design not seen in modern trading cards. Since this card is the standard size, it is much easier to find in mint condition.

That is one of the most significant factors driving down the price of mint condition, second-year Kareem Abdul-Jabbar cards.

As one of the game’s biggest legends, it should be no surprise that Kareem Abdul Jabbar’s rookie cards are so valuable.

Since a lot of time has passed since his retirement, the price of his rookie cards has stabilized at around $3000. However, they are usually sold at auctions, so they sometimes go for incredibly high prices.

You can leave a comment or send us an email.

Buying a Kareem-Abdul-Jabbar rookie card is a difficult decision to make. The cards are already costly, but he is a legend of the game, and as a result, you could probably get your money back if you wanted to sell it.

Since the card is so old, the price appears to have stabilized. While that could change, it is unlikely to shortly. If you want to invest in the card, you must purchase it and put it up for auction. Auctions can be very profitable in the right situation, but they are not always as profitable as you might hope.

Investing in a Kareem Abdul-Jabbar rookie card is expensive, but it could have a tremendous return.