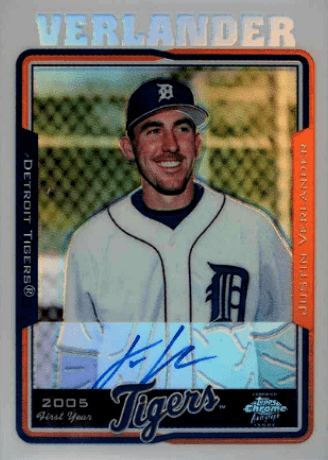 The Detroit Tigers drafted Justin Verlander (2/20/1983) with the 2nd overall pick in the first round of the 2004 MLB June Amateur Draft.

Verlander’s rookie cards were already relatively high, to begin with being the 2nd overall pick but then really took off once he won the rookie of the year in his rookie season (2006).

Here are 10 of the most excellent Justin Verlander cards of all time, with an eye on any that have the potential to produce a good ROI in the future.

Let’s take a trip down memory lane, starting back in 2003. 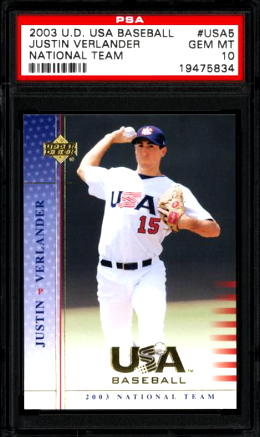 The first card to make a list is an XRC released a couple of years before the others.

It’s contained in a 27-card set that features the US National Baseball team, as Verlander pitched for the USA in 2003 and helped them to win a silver medal in the Pan American Games.

(The result was one of the reasons why he was the second overall pick in the 2004 MLB draft by the Detroit Tigers.)

Along with an image of the pitcher and a Team USA logo, there’s a large auto along the bottom. 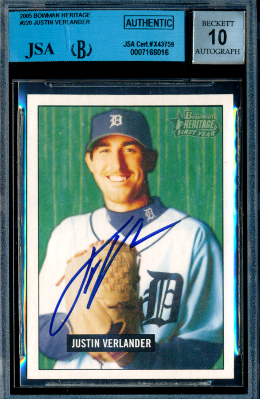 The first Verlander RC to make a list is found in 2005 Bowman Heritage sets.

The design is based on the 1951 Bowman collection, so there’s a simple profile shot of the player and a plain, black-and-white name tag at the bottom. A ‘Bowman Heritage First Year’ logo can be found in the top left corner.

Compared to many others on this list, it’s an affordable entry-level Verlander RC, even when looking at gem-mint graded copies.

It’s likely to shoot up in price when he inevitably retires. 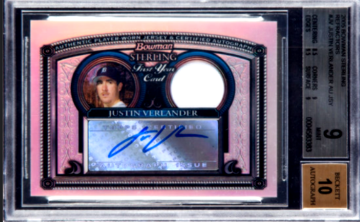 On paper, the 2005 Bowman Sterling Verlander card has it all. Authentic player-worn memorabilia and a sizeable certified autograph at the bottom.

However, it’s often disregarded in favor of more popular RC options, and that’s reflected in the overall asking price.

It’s slightly cluttered, while the lack of a serial number is another explanation for lower values.

The image of Verlander is tiny, and the same goes for the jersey patch. It might not be the most popular card, but it’s another decent entry-level investment piece. 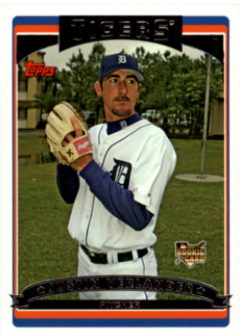 Another RC meant to evoke memories; the 2006 Topps ‘52 collection celebrates their most prestigious set.

In practice, Verlander is included in a large profile shot, looking off-camera with his glove clasped in his hands.

Investing Advice: How Much Should You Invest Annually in Sports Cards?

It has a similar name tag to the ‘52 Topps set, with one significant difference. Unlike Mickey Mantle and co, the autograph is hand-signed instead of a facsimile copy.

The crisp golden background makes it parallel, even if it’s only a base card.

Prices are slowly creeping up by this point, and it should be seen as a mid-level Verlander RC.

All 2005 SP Update Series cards are autographed and serial-numbered to 185 copies, and this Verlander RC is no different.

It’s boosted by a clean blue and white design, alongside a large image of the player preparing to pitch in his Tigers uniform.

While it might not be the rarest RC with a signature attached, it’s still pricey when looking at gem mint graded copies.

It’s another worth keeping an eye on with retirement looming. 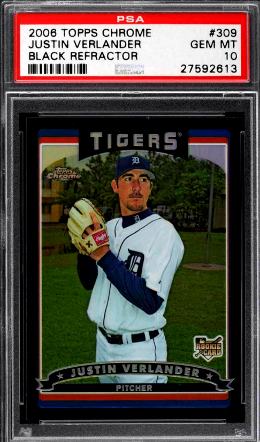 Topps dominates the top five, and where better to start than Verlander’s 2006 Chrome RC?

If you take a closer look, you’ll see that it’s the same image as the one used in the 2006 Topps ’52 Signatures set, although it’s zoomed out.

This allows a clear view of the fields in the background, while it has a vintage RC logo at the bottom.

As with any Topps Chrome Baseball card, colored refractor parallels are expensive.

The Red Refractor offers the best balance of value and affordability, numbered 90 copies. 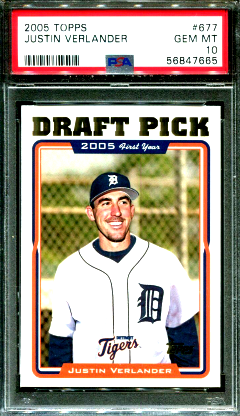 This early Verlander Topps RC was released as part of a subset for “2005 First Year” players, most of whom were drafted the season before.

The card features a simple profile shot of the player and a large ‘Draft Pick’ logo at the top. (You’ll also find a small chrome sentence celebrating; “54 Years of Collecting” for the company.)

It’s arguably the pick of the bunch when looking at base cards, and there are also colored parallels, including a gold version numbered to the year of release. 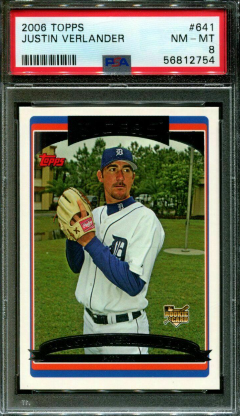 Verlander’s 2006 Topps Chrome card should be on your radar if you’d prefer a budget option. There are various colored refractors to hunt for, including a Red version limited to just 90 copies.

The lack of an auto might be slightly off-putting, but it’s still a rare, earlier release that features the player in his Tigers gear.

Don’t let the lack of an auto put you off the 2006 Topps Chrome RC if you’re looking for affordable Verlander cards.

It might not be wrapped in chrome, but it’s a flagship Verlander rookie with graded versions that sell for a fraction of the price compared to the cards seen above and below.

The card also shares the same image as the Topps Chrome release from the same year.) 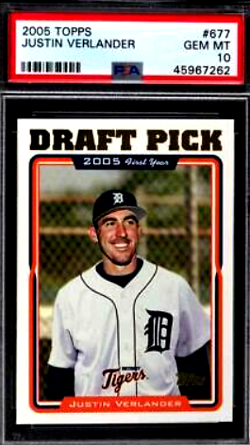 This is a 2005 Verlander RC, with auto on the bottom, boosted by the power of the Topps brand, and it’s wrapped in a sleek chrome finish.

It’s a wonder this card didn’t take the top spot, and it’s a great contender for potential ROI in the future.

Parallel versions aren’t as plentiful as they would be with a current release, so there are numbered black, red, and gold refractors and base versions limited to 500 copies.

Verlander’s 2005 Topps Chrome RC is undoubtedly one of the more popular options, especially when looking at Refractor parallels that are serial-numbered to 500 and below.

Unlike many other rookie cards, the player is the main focus, with a smiling profile photo-taking center stage. His surname is found in block capitals at the top, while there’s an excellent auto found at the bottom.

Given the chrome finish and advancing years, finding new, graded versions is difficult. 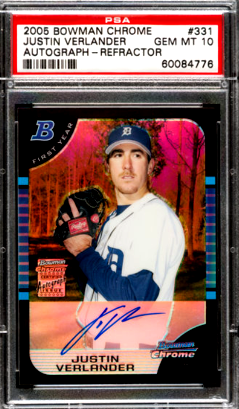 Rather than Topps, Verlander’s 2005 Bowman Chrome RC takes the number one spot on this list.

Bowman Chrome autos tend to be preferred by collectors interested in modern rookie and prospect cards.

The base card is reasonably valuable if it’s a graded gem mint copy, but the real money is found within numbered refractor parallels.

There’s also a signature found at the bottom, and chrome parallels are numerous. We prefer the Topps card, but either could be a great investment piece in the long term. 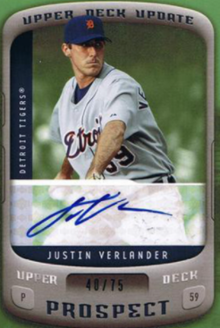 Good luck getting your hands on this baby. We could barely find a photo, less obtain the actual card for our portfolio.

Email owner@goldcardauctions.com if you have this card graded or have a lead on this card. Thank you. 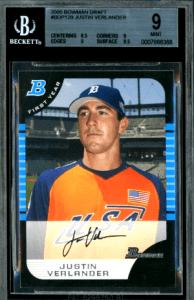 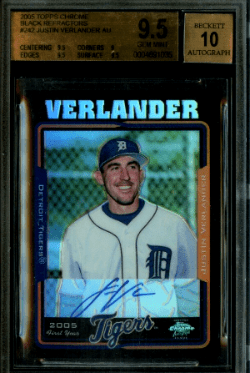 Have some old Justin Verlander baseball cards and want to know what they might be worth. Email value@goldcardauctions.com for more information.

If you’re looking to purchase a Justin Verlander RC and need advice, please call us at advice@goldcardauctions.com or comment at the end of the write-up.

Verlander is considered a lock for the Hall of Fame if and when he decides to retire sometime over the next decade. The pitcher has won it over the years and added a second Cy Young award in 2019  to his impressive legacy.

His cards are relatively underpriced and should see decent improvement when he calls time on his career. The same is true when he joins the Hall of Fame, so we’d recommend keeping tabs on prices in the meantime.

He missed the 2020 season following injury, which is another reason his cards are cheaper than they could be. Verlander will be back in the mix soon enough, and it’ll serve as another reminder for investors and collectors.