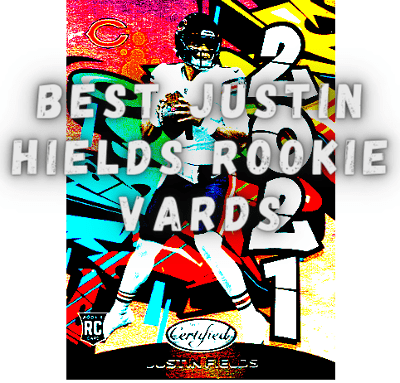 Justin Fields took a winding path to the NFL. He went from baseball prospect to backup quarterback at UGA, to Ohio State starter, and finally to NFL draft pick.

Winding path aside, few ever doubted that Fields would eventually become a first-round pick, assuming he chose football over baseball.

His talent and leadership qualities made him one of the top college football recruits ever. They also led him to success in his two seasons at Ohio State. Now, they have NFL execs tantalized.

Gutting it out through an injury while topping Trevor Lawrence and Clemson in the 2021 Sugar Bowl only cemented Fields as a future top pick.

We cannot be certain what Fields’ NFL future holds. As a card investor, this should excite you. Uncertainty presents the opportunity for you to secure a Fields rookie card on the cheap.

To be clear, the cards listed here are college and prospect cards, not official NFL rookie cards. As Fields settles into his NFL home, check back for those official rookie cards to be released. 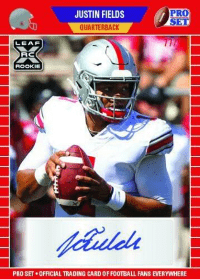 Pro Set took a long hiatus from the football card trade, as its most recent set before this year was printed in 1993. What’s the saying? Good things are worth the wait?

As an autograph card, Fields’ unique signature is featured in blue ink on a pristine white background. Fields grasp the football with two hands in his white Ohio State Buckeyes uniform.

The card was designed with a retro feel in mind. In fact, it’s the exact same design from the 1993 set of Pro Set rookie cards.

A primary orange border contains white boxes along the sides. Fields’ purple and gold nameplate is located above his image, positioned in between the Pro Set logo and a nondescript football helmet.

The autograph makes this card worth owning, though a mint version may cost you in the high three figures or low four-figure range…for now.

You can also secure a non-autographed version of this card. It will cost you significantly less, likely less than three figures.

As one of the earliest Justin Fields football cards from a legitimate manufacturer, it might be worth taking a flier that even the non-autographed card will appreciate. 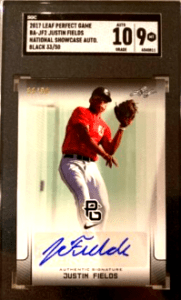 When you think of Justin Fields, you probably don’t think of baseball. As a card investor, you might want to change your thinking a bit.

Though he’s known today as a quarterback, Fields was once a highly-touted baseball prospect as well as stud high school quarterback. Like Russell Wilson and Tim Tebow, Fields chose football.

Valuable prospect and rookie cards featuring Fields (in any sport) are few and far between. Accordingly, this Fields baseball card has strong value.

The 2017 Leaf Perfect Game card shows Fields having just released a baseball. He’s in a uniform provided for his prospect showcase, with a red jersey, grey pants, and black hat with a white “PG” (Perfect Game) logo.

The card’s tone is white. Fields’ image is surrounded by a white background with a slight green tint just behind him. The Leaf scrawl is in the upper-righthand corner, but it is one of the few design features on this card.

Fun Read: When Baseball Cards Worth Millions Were Found in Homes

An appealing feature of this card is the autograph. Under a PG logo and a Nike swoosh is Fields’ signature in blue ink. It’s a different signature than other Fields cards, indicating that he has yet to decide on a signature…well, signature.

As Fields forges his NFL career, a signed card featuring him playing an entirely different sport will likely gain greater novelty. This novelty can translate to a return on investment. 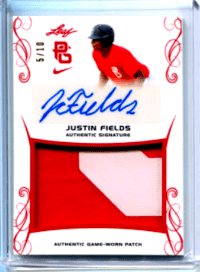 Please check back every couple of weeks as his rookie cards will get better and better over the next 12 months as he is welcomed to the NFL via the NFL Draft on 4/29/2021.

Justin Fields COULD be the franchise quarterback, not a franchise shortstop or second baseman (his listed positions as a high school baseball star).

If you’re a Fields fan or a fan of making money on your trading card investment, does the sport really matter anyway?

Bottom Line: Justin Fields will play football in the NFL, but we’re just not convinced he is going to be any better than other Ohio St QB’s the NFL has chewed up and spit out.