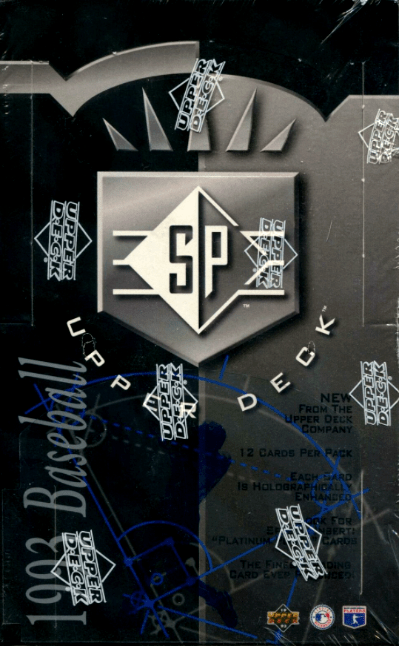 The Junk Wax Era lasted from 1987-1994 and is a time period in which the number of cards printed increased exponentially compared to previous years.

It’s hard to fathom for younger collectors, but back then cards were released in their millions, to cater to a massive audience of hobbyists, as well as would-be investors.

Top-Rated Article: Why Investing in Sports Cards are a No-Brainer

Cards were seen as a better investment than gold, and manufacturers catered to their audience by printing sets in numbers that had never been seen before.

It came to be known as the ‘Junk Wax Era’, since the cards weren’t worth any more than the cardboard they were printed on. (After all, there are often millions of copies to choose from.)

We’ve come up with a list containing some of the best hobby boxes and RCs from the junk wax era, in case you’re tempted to rip open a couple of vintage packs that are cheaper than many modern sets.

Here are eight of the best hobby boxes that were released during the junk wax era. Each contains a certified hit or two, making them a fun option if you plan to open a pack or two with friends.

As for the cards mentioned below, the condition is the key to their sale price. Pristine copies can go for thousands, while an average copy might be worth a few dollars. (It’s why graded copies are valued highly, and sell for a premium in comparison to ungraded versions.)

We’ve listed the sets from best to worst depending on the RC, and we’ll begin with one of the biggest names in baseball. 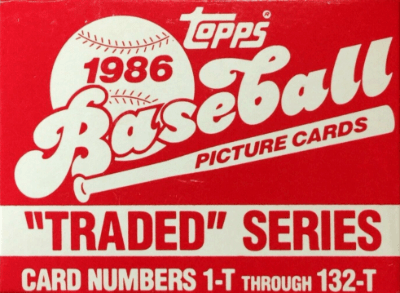 The 1986 Topps Traded collection is the first to make the list. Originally seen as one of the premier sets from the decade, it has lost its allure ever so slightly because of the sheer number of cards produced at the time.

Using a similar design to the base ‘86 set, Topps Traded cards have a checklist packed full of the greatest names from the era.

Topps TiffanyBaseball cards are synonymous for offering upgraded versions of the company’s sets from 1984 through 1991, with the ‘86 set notable for a glossier front. (They also have smaller print runs, which helps to increase the overall values of graded copies.)

Barry Bonds’ Rookie Card is the pick of the Topps Tiffany cards, showing off the record-breaking slugger in a simple profile shot with a bat laid on his shoulder.

The large black and yellow Pirates logo found at the top will cause some condition-related issues, showing any flaws or dings. 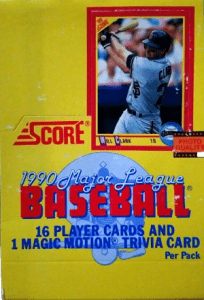 1990 Score Baseball is the third set released in their run which began in the late 1980’s, and the company made the decision to go for wild border colours which are iconic in the present day.

Thomas’ 1990 Score RC features a rare profile shot of the player smiling at the camera, which is a notable departure from the majority of his action-based cards. It might not be as rare as his Topps No Name RC error card, but the 1990 Score Thomas RC is still one of the best hits from the set. Other notable cards include a Larry Walker RC, as well as a black and white Bo Jackson card. 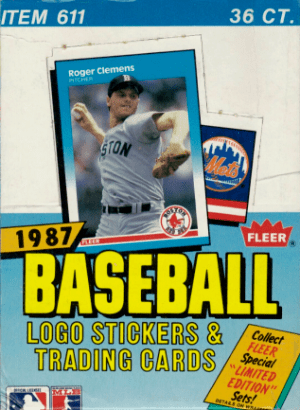 The only Fleer hobby box to make the list is from 1987. It’s another recognisable set, thanks to a two-tone blue border which is coloured in every corner.

Once again, we’re looking at a Barry Bonds RC from the late 1980’s. The 1987 Fleer set is numbered by the order the teams finished in 1986 and then alphabetically by the player’s last name, which is why Bonds is numbered #604. The player is featured in a large profile shot, with a vintage Pirates logo on display.

Glossy versions were released for selected cards, printed on superior stock which is easy to spot at first glance, and it’s the option we’d look to if you’re buying the card as an investment.

Cooperstown has been elusive for the player so far, but that could all change for one of the greatest hitters the sport has ever seen. 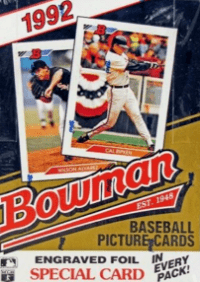 The 1992 Bowman set is packed full of glossy options and an updated design compared to earlier releases. This minimalist approach has paid dividends in the long-term, leading to one of the more memorable sets from the era.

In terms of the Bowman set, Mariano Rivera’s ‘92 RC is the cream of the crop, and is one of the more recognisable rookie cards from the early 1990’s. Rivera is a multiple World Series champion and serial winner, so it’s no surprise that one of his RCs has managed to make the list.

The card shows a baby-faced Mariano in street clothes after inking a $2,000 contract with the New York Yankees. It’s a great card which deviates from the norm, and we see great potential as a long-term investment piece. 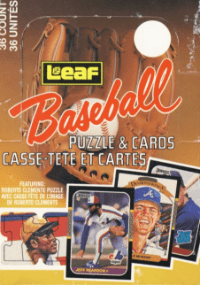 It may be the only Leaf set to make the list, but you shouldn’t sleep on an RC released in the 1987 collection. Greg Maddux has a card which is seen as the key to the set, although it’s sometimes mistaken for a Donruss release.

This is because it the same design as the 1987 Donruss set, with the exception of the “Leaf” logo on the front of the card, and the backs of the card written bilingually in both English and French.

“Once again, the black corners have led to difficulties when hunting for higher PSA grades.”

Each has a posed or in-action color photo framed by a black-and-gold border. In this case, the World Series winning pitcher is shown in an action shot, with one leg raised as he prepares to let fly with pinpoint accuracy. 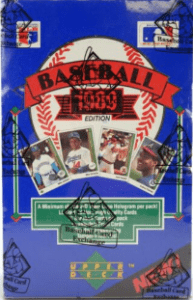 Heading towards the end of the decade with this 1989 set, advances in technology saw high-quality card stock, and anti-counterfeiting holograms for the first time. This also led to a high price point of $1 per pack, cementing this Upper Deck release as a revolutionary option.

Randy Johnson, John Smoltz and Gary Sheffield are three of the RCs from the set, but the undeniable star is Ken Griffey Jr.

This very card makes our shortlist for the best long-term baseball card investments, helped in no small part due to the player being one of the best center fielders in the history of professional baseball.

By far one of the most iconic cards in modern sports and a childhood memory for many in the hobby, the image of Griffey Jr. beaming towards the camera is hard to match. 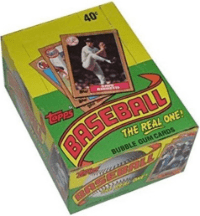 The ‘87 Topps set is instantly recognisable thanks to the distinctive wood-grain borders, which can lead to difficulties when looking for gem mint copies of the best cards. With that being said, the majority of cards from the set are almost worthless, as products of their time.

With a third (and final) rookie card on the list, there’s no denying that Barry Bonds was one of the biggest stars from the era.

A number of steroid allegations may have hurt his legacy in the long-term, but the record books will show that he has the most home runs in a single season (73), while he hit more home runs than anyone over his career.

The 1987 Topps Bonds card might have come a year later than the others, but it’s still considered to be an RC for many collectors. Given the coloured border, PSA 10 versions are showing a good trajectory in the mid to long-term. 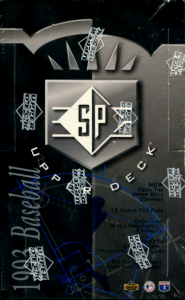 Where better to end than the 1993 Upper Deck SP set?

The best chance of significant profit is found within the Premier Prospects subset, which uses all-foil fronts for their designs. This is where you’ll find a Derek Jeter RC which is seen as one of the holy grails of the hobby.

Many collectors may sneer at cards released in the junk wax era. However, in January 2020, a PSA 10 graded copy sold for a record $180,000. Beckett acknowledged the exploding prices at the time, charting their growth over the past five years;

The point is, the card itself may not be especially rare, but pristine copies are. It’s not bad for a set released at the height of the junk wax era, but it is one of the few exceptions to the rule.

We’ve already mentioned how important the condition is when considering any of the cards released between 1987 and 1994.

If you’re looking at hobby boxes, we’d advise to send off any hits to one of the relevant grading companies if you’re hoping for the best ROI.

The overall condition, as well as the player featured in the RC are key to higher values.

Remember; the vast majority of cards from the era are worth hardly anything, even if they were well looked after for the past 30 years or so.

The boxes themselves are fairly cheap, which is unsurprising given that they were originally produced in such high quantities.

They can be picked up via online auction sites such as eBay, and will differ in price depending on who may be inside.

It’s fair to say that there are some exceptions to the rule when it comes to buying boxes from the junk wax era.

The list contains a who’s who of the best Hall of Famers from the era, and you’re spoiled for choice due to the sheer number of competing manufacturers who were experimenting with their cards.

Of course, the majority of options simply aren’t worth your time. That’s not to say that there aren’t numerous benefits to be found when buying older hobby boxes released from 1987-1994.

For one thing, they’re cheaper than the norm, while you can find full sets for less than anyone would have expected when they were originally produced.

Any collector would be proud of a pristine Jeter/Griffey Jr. RC, especially if it’s wrapped in a PSA 10 slab. As with any decade, there are a number of hidden gems to be found, and some cards are worth significantly more than others.

The Hall of Famers (barring Bonds) make for a stacked list, especially when looking at Tiffany/Glossy versions that are slightly rarer than normal cards.

What is the Junk Wax Era?

The Junk Wax Era is a time in sports collecting when the card companies were printing 3x as many cards as before in a quest for huge profits at the expense of devaluing the cards/sets.

When was the Junk Wax Era?

What are the most valuable junk wax era baseball cards?

Why is it called junk wax era?

It is called the junk wax era because the packs of cards printed back then are considered junk. Ironically that is not the case anymore.