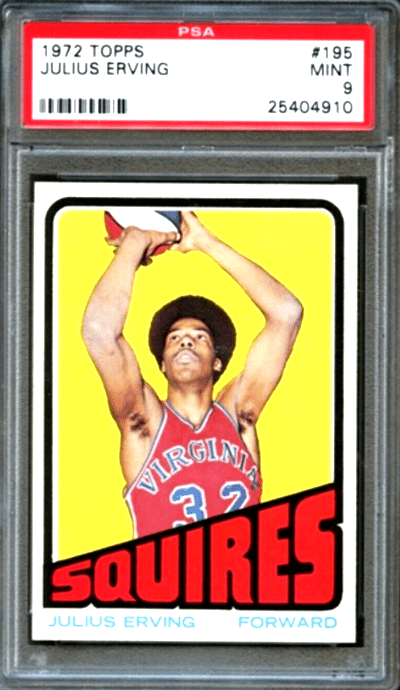 Julius “Dr. J” Erving (2/22/1950) was selected 12th overall in the 1972 NBA Draft by the Milwaukee Bucks. However, Erving spent most of that year playing in the ABA rather than the NBA.

Dr. J would eventually make his NBA debut in 1976 with the Philadelphia 76ers, who purchased his rights for $3 million.

Julius Erving’s ABA debut came in 1971, but his first professional cards were not printed until 1972. These are the top rookie cards in the Julius Erving pantheon. 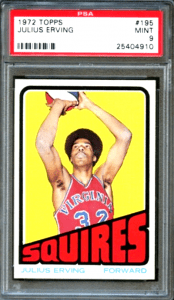 The 1972 Julius Erving Topps RC #195 is the top choice for Dr. J rookie card collectors. Considered by some to be the only “true” Erving rookie card, it’s a hot-ticket item.

There’s a limited pool of highly-graded copies, which assures a high floor of value for owners of those cards.

Aside from being the sole true Dr. J rookie card, it’s an utterly cool one. Erving wears a red Virginia Squires jersey, arms raised high in a shooting motion with a multi-colored ball in hand.

A vibrant yellow background is a striking contrast to Erving’s photo. A megaphone-shaped, black-and-red “Squires” nameplate at the bottom gives the card even more volume.

The back of the card details Erving’s rookie stats in the ABA along with a quintessentially 1970s cartoon of a basketball player.

For collectors with the financial wherewithal, this is a collection-defining card that you might want to spring for. 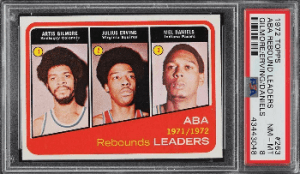 The 1972 Julius Erving Topps #263 resides in the same set as the rookie card mentioned above. Though it doesn’t get the same level of respect, it’s still a notable card.

The card shows Erving executing an underhanded finger roll. His afro looms large while the white shorts of his white Squires uniform ride as high as high can get.

The bottom of the card features an upward-slanting red nameplate. The plate commemorates Erving’s election to the All-ABA Second Team.

You can get this card at a significantly lower price point than the Topps RC #195. It could end up seeing significant price growth considering the limited pool of Erving RCs. 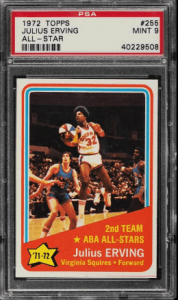 Artis Gilmore of the Kentucky Colonels and Mel Daniels of the Indiana Pacers share the stage with Erving. Make no mistake: Dr. J is the centerpiece (literally, as his headshot is in positioned in the middle).

Oriented horizontally, the card features an upward-slanting nameplate that is common to the 1972 Topps NBA set. The plate reads “ABA 1971/1972 Rebounds Leaders”.

It’s not the sexiest card. It’s not even considered a bonafide rookie card. But the 1972 Julius Erving Topps #255 is a card from Erving’s rookie year with a strong value floor and lots of potential for growth. 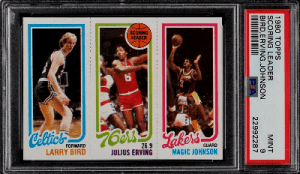 Looking to obtain an estimated value of a Julius Erving basketball card? Please email value@goldcardauctions.com (include 2 photos at minimum).

When it comes to Julius “Dr. J” Erving rookie cards, it really is a one-horse race.

You can either shell out a fortune for 1972 Topps RC #195 or pay significantly less for the other two 1972 Topps cards and hope for the best.

It all depends on your budget. Those who want to invest in Dr. J at a value-conscious price point might follow go for the 1972 Topps #255 or #263. Those with the financial means who want more reliable returns might choose the 1972 Topps #195.

Because of the limited pool of Dr. J rookie cards, there is the growth potential with each of these cards.