Julio Rodriguez was signed with the Seattle Mariners out of Loma de Cabrera, Dominican Republic, and was born 12/29/2000 via Julio Yarnel Rodriguez. He destroyed the minor leagues forcing Seattle to call him up at the ripe old age of 21, and so far, he has not disappointed.

Many experts have compared JROD to Ken Griffey Jr. and Alex Rodriguez, but we think he looks and plays like a young Gary Sheffield.

Focused on the process, I know that the dream of playing in front of you Mariners fans will come true!!🙌🏽 #JRODshow #TrueToTheBlue #withthenumber44 https://t.co/VQEl4ZaAbd

Let’s look at the top-rated Julio Rodriguez rookie cards released to date. Please check back often, as many of his best rookie cards are still to be released. 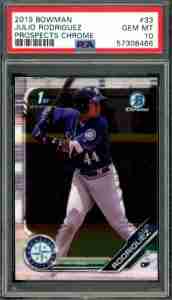 Our top-rated Julio Rodriguez card should be going forward in terms of ROI. Look for this card with an autograph with a PSA 10 grade if you want to invest some real money in this kid. 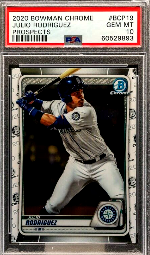 Another nice-looking Bowman card, but you might as well buy the above card if you’re considering this one. 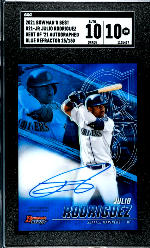 A beaut of a card, particularly at low numbered refractors/autos as the blue above, is a surprise.

Unfortunately, its reign at number 3 will be short-lived once his first Topps rookie card makes its debut. However, if you want to invest in one of the colorful low-numbered BB refractors/auto, we won’t stop you. 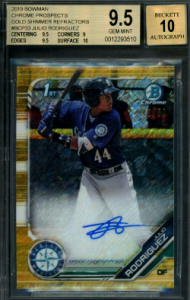 The most expensive Julio Rodriguez rookie card will come in the form of a 2019 Julio Rodriguez Bowman Chrome Low Numbered Refractor RC with an auto (such as the Gold Shimmer shown above).

Most Common? The most common Julio Rodriguez baseball card you will see up for auctions is his 2019 base Bowman Chrome rookie card.

Julio Rodriguez is one of the top-rated prospects in baseball, and many feel he will be excellent if not an all-star.

We are not feeling it.

The only MLB prospect we are currently buying is Jordan Walker. This could change as investing in young MLB players’ rookie cards can be very fluid and not advisable for beginners or those not locked into the MLB prospect pipeline.