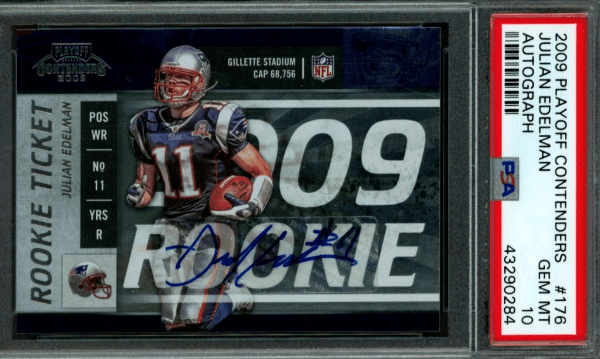 Julian Edelman (05/22/86) is a wide receiver and punt returner who has played for the New England Patriots since being drafted (232nd overall) in 2009. He’s one of the most productive receivers in post-season history and has played in four Super Bowls (XLVI, XLIX, LI, and LIII), winning three.

With the loss of Tom Brady following a free-agency departure, he’s one of the remaining elder statesmen in the team and signed a two-year contract extension in 2019.

During his prime, Edelman was widely considered one of the best slot receivers in the league and had a knack for getting open during the most crucial of times. He held down the position for the Patriots for a long time and his departure left a hole that the team is desperately trying to fill.

Here’s the lowdown on the best Julian Edelman rookie cards, along with an investment outlook for the next few years as he begins to enter the twilight of his career.

Edelman was a late pick in the ‘09 draft, so he’s only found on eight cards. Six are numbered to 999 or less, while four are signed by the player himself. We’ve looked at recent sales to bring you a list with three of the top options right now.

Edelman’s Rookie Ticket is a bit of a letdown. We have no idea of exactly how many copies there are, while it comes with an autograph of the stickered variety. However, it does have a solid black and white color scheme, and the brand is valued highly by collectors.

Trending: Best 5 Running Backs of All-Time and Their Rookie Cards

It comes with an image of the player holding a football in hand, while there’s a lot going all around him. For example, there are massive ‘2009 Rookie’ letters found behind and in front of him, and it’s a struggle to fit everything in despite the landscape design. It’s still one of the more popular Edelman RCs, especially when looking at gem mint versions. 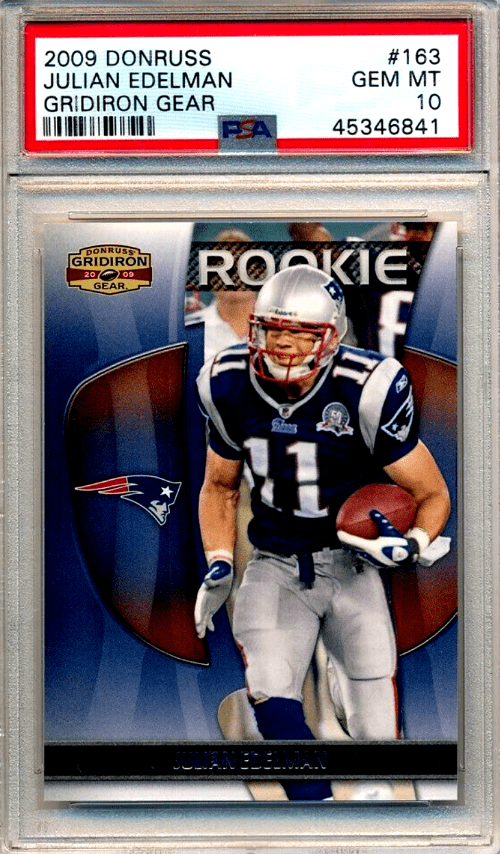 The 2009 Donruss is the second card to make it onto the list. A print run of 999 is far from the lowest on this list, and you’ll have to look to the back to find the serial number in the first place.

Another design that feels a bit overpacked, at least this card makes sure the focus is on Edelman himself. The player is featured with a football under one arm in a decent action shot, and there’s a New England Patriots logo right next to him. Donruss also couldn’t resist large white ‘Rookie’ lettering, although it’s less pronounced compared to the Rookie Ticket found above.

It’s by far the most affordable card on the list, and we’d recommend gem mint copies as a great entry-level investment option. There are also a number of rare parallels, with smaller print runs. 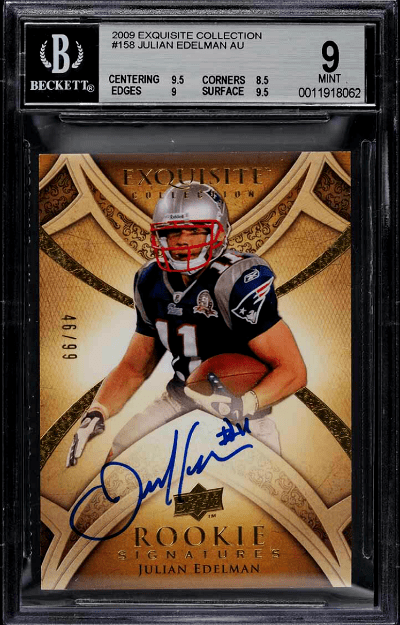 On the subject of small print runs, the 2009 Exquisite Collection release is undoubtedly the top Edelman RC. With a base card numbered to just 99, there’s no real point in having many parallels, and as a “Rookie Signatures” edition, there’s a large on-card auto located at the bottom.

It’s a stunning release, with a detailed gold background and a holo trim. Of course, this leaves it more open to issues relating to the overall condition of the card. There are a couple of rarer parallels, which truly represent the best of the best.

While the three cards mentioned above are the best for investors that are looking to open a position in Julian Edelman rookie cards, there are others that can still be viable options. One of the cards that just missed our list of the top three is the one shown here, as it’s still a strong card but couldn’t quite crack the exclusive top three. 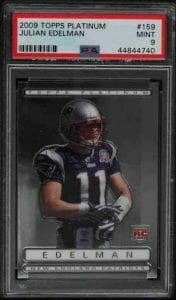 While the base Julian Edelman rookie card from the 2009 Topps Platinum set is fairly common and can be found for a reasonable price, there are a variety of parallels that have different print runs. In fact, the “Rainbow” parallel that is limited to around 1500 copies is one of the most popular due to its interesting design.

The card above shows Edelman in the dark blue Patriots jerseys. His last name is featured front and center on a large graphic that goes across the bottom of the card, with his team listed below that. The top of the card features a similar graphic that reads “Topps Platinum”. Collecting the different parallels of this card is a good way to gain access to a well-known product that collectors want. 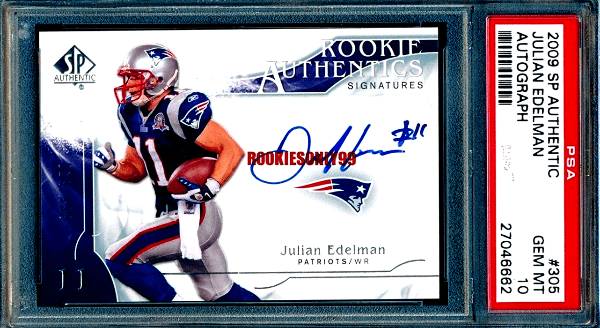 If ever there was an overachiever in the NFL, Edelman went from being the 232nd pick to become one of the most productive receivers in post-season history. It’s fair to say that his teammates played a part in his success, but that’s true of any dominant franchise.

Edelman missed the entire 2017 season because of a torn ACL and was then later suspended for the first four games in 2018 after being found to have used PEDs to aid his recovery. It was a dark time for the WR, but he managed to overcome any lingering doubts with impressive displays upon his return.

In fact, Edelman is the first Jewish football player to be named Super Bowl MVP, although he did win it in the same year that he popped for PEDs. It could be held against him when it comes time to hand over future Hall of Fame ballots, but the best players do tend to get in eventually.

Missing out on an HoF spot would certainly lower the potential for his RCs to take off when he retires, but Edelman does have more of an excuse than most, having been actively rehabbing what was a terrible injury.

The values of his more interesting RCs have risen, and the majority have low serial numbers, good designs, and a few rare parallels. The average price of his cards has also increased dramatically since 2018, making them somewhat enticing from an investment perspective.