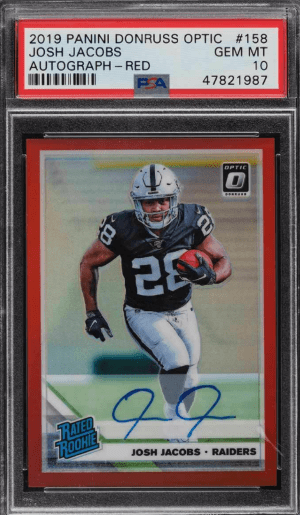 For a man who was once homeless and sleeping in an old Chevy Suburban, Josh Jacobs has come a long way.

Though he hasn’t yet played a single down in the NFL, his career at Alabama and selection as a first-round pick indicate that his future holds a massive amount of promise.

As an investment, you can never be 100% certain how a player’s career will go before he’s in the league.

But you have to balance that uncertainty against the enormous potential gains of getting in on a star player’s rookie card before he’s a star.

If you could go back and get a Zeke Elliot rookie card before he broke out, wouldn’t you?

So let’s take a look at how good an investment Josh Jacobs’ rookie cards might become.

First, he played his college ball in the SEC, so he’s got a track record against some of the best defenses outside of the NFL.

Second, and more importantly, he put up consistent, quality numbers across multiple seasons there.

He averaged almost 6 yards per carry on the ground and another 12 in the air. He didn’t just put up junk volume stats, he was effective every time he touched the ball.

That’s what you want to see in potential future stars.

The last big thing to look for in a young RB is the millage.

Luckily, Jacobs only had 251 carries in all of college.

Unlike many young star RBs, he hasn’t spent his college career burning himself out, so he could have a very long pro career.

If Josh Jacobs looks like the kind of high-upside investment you’re looking to pull the trigger on, here are the best options for you to choose from. 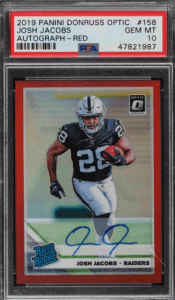 More of an NBA fanboy? Check out why NBA card collecting is the future. 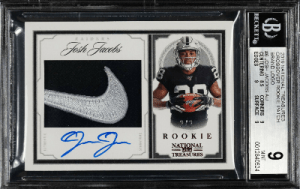 A great card for those who think Jacobs is in for a big 2nh half of his career. 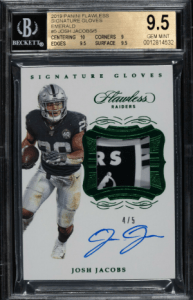 Not as pricey as the National Treasures but not cheap either.

Josh Jacobs is going to have to have a big year or two to get him back on our buy list. Pass for now.