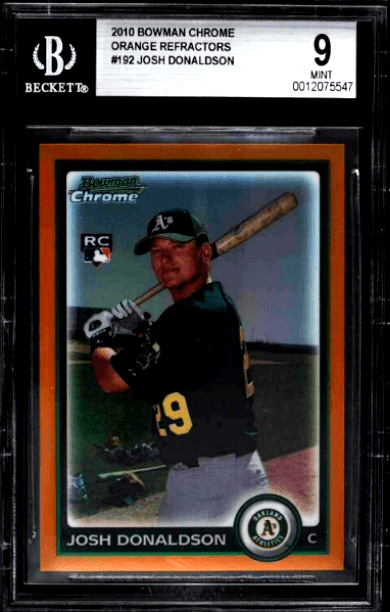 Donaldson later earned a four-year contract with the Twins but struggled during the reduced 2020 season (which also took a toll on Josh Donaldson’s rookie card).

Here’s everything you need to know about three of the best Josh Donaldson rookie cards, as well as investment advice for the next few years.

Donaldson’s rookie cards hail from 2010, as he filled in for the Oakland A’s before being sent back to the minor leagues in 2011. 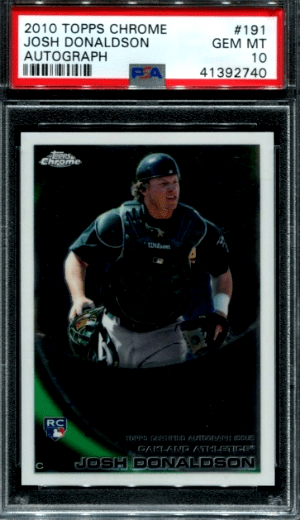 The first card we’ll be looking at has a signature attached and is a decent choice even if it doesn’t have the best image of the player. Donaldson is found in an action shot, decked in full gear as he looks off-camera.

There’s also a Gold Refractor version which is limited to just 50 copies, and the on-card auto is a generous size. 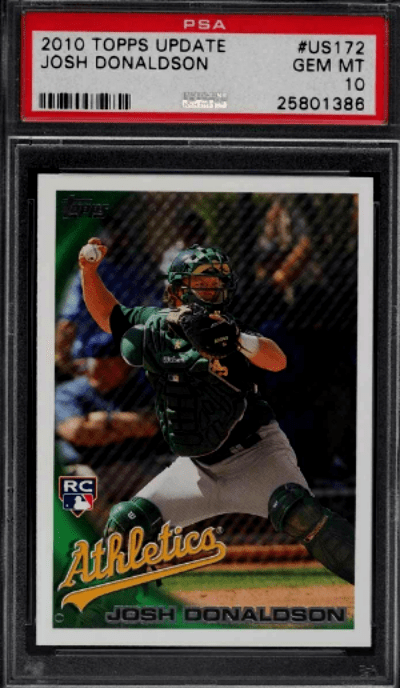 Here is another great-looking Josh Donaldson Topps rookie card in Update form. Numbered #US172 the card shows Josh hopefully gunning down a would-be stolen base attempt. The word Athletics, Josh Donaldson, and the Topps RC logo are all sitting comfy into the bottom left corner. 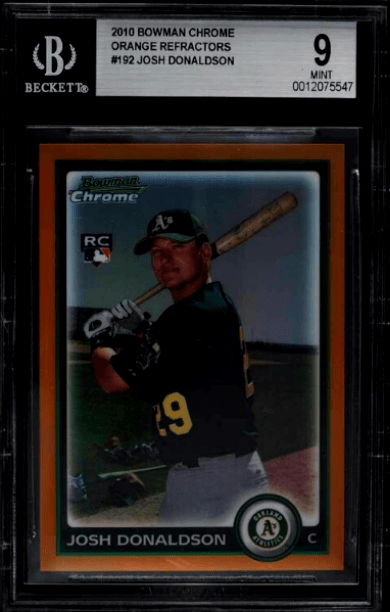 Cheaper than the card seen above, his 2010 Bowman Chrome RC (#192) does feature a much better image of Donaldson. You’ll find the player in a batting stance, as he poses for the photo with a hint of a smile on his face.

The lack of an autograph is the reason for lower prices, even when looking at numbered parallels. 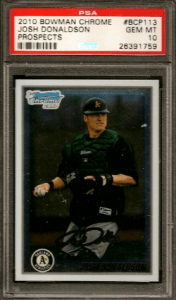 There are versions found with or without a signature, as 2010 was the first year in which each player who signed for Bowman Chrome would have a base Prospect card and a corresponding Autograph edition. They both come with a range of colored refractor parallels. 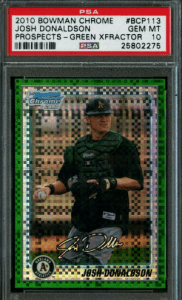 Purchase advice? If you are looking to purchase a Josh Donaldson rookie card and would like advice please email advice@goldcardauctions.com. 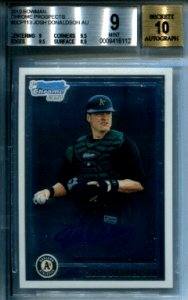 Despite his comeback in 2019, there hasn’t really been much interest in the average Donaldson RC. Maybe that’s due to recurring calf issues which held him to just 28 games in the 2020 season.

The former MVP signed a long-term deal with Minnesota, and he still has time to make up if he wants to secure an HoF spot. He was 27 when he played his first full season, so it depends on how they judge the longevity of his career, no matter how brightly it burned.

He still has time to make the difference himself and will be back in action over the 2021 season. Will his rookie cards be a good investment? It depends on whether you think he can make yet another comeback, ensuring his spot in the HoF is secured.

What is the best Josh Donaldson rookie card?

The best Josh Donaldson rookie card, in our opinion in terms of return on investment, is his 2010 Topps Chrome rookie card #191.

How much is a Justin Verlander rookie card worth?

How much is a Bryce Harper rookie card worth?