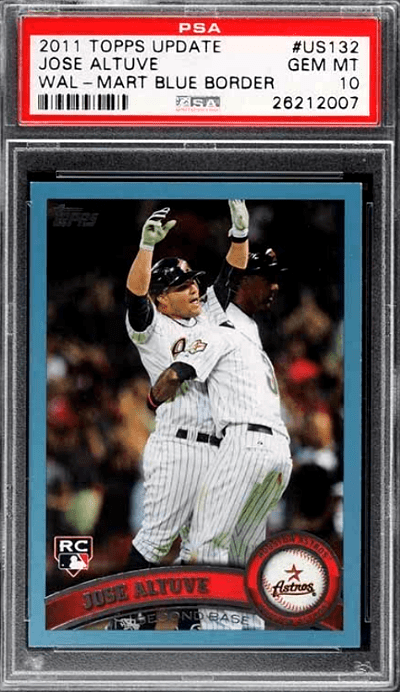 Jose Altuve (06/05/90) is a six-time All-Star and World Series champion who has been with the Astros since making his MLB debut in 2011.

Originally signed as a 16-year-old in his native Venezuela in 2007, the 5’5″ second baseman belies his diminutive stature when batting.

He earned the AL Hank Aaron Award (2017) and has won the Silver Slugger Award five times in a row between 2014 and 2018. He has faced difficulties in terms of reclaiming his pre-2020 form but still has time on his side.

We’ve come up with a trio of the best Jose Altuve rookie cards, as well as investment advice looking towards the future.

With only four options overall, it’s not like you’re spoiled for choice with Altuve’s rookie cards. Parallels do help to increase the overall rarity, especially when looking at graded versions. 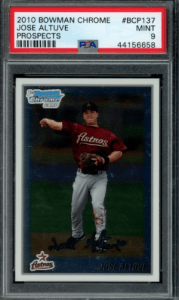 A prospect insert rather than an RC, this 2010 BCP release is still valued highly. It’s the first card to show Altuve in his Astros uniform, even if it doesn’t have the greatest design. The image of Altuve is slightly stiff, and the facsimile auto at the bottom isn’t the best addition. 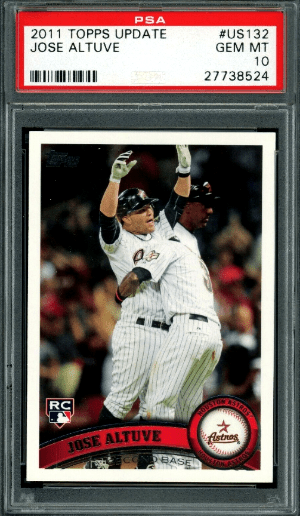 From the 2011 Topps Update set made famous by the inclusion of Mike Trout, Altuve’s card is a decidedly less expensive option in comparison. It features a strange image of the player as he celebrates while being held by a teammate, and numerous parallels abound. Gem mint copies always attract a large number of bids at auction. 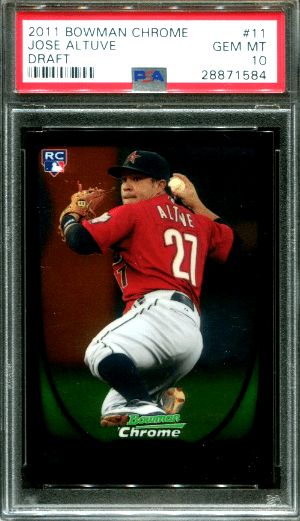 Finally, we have Altuve’s 2011 Bowman Chrome Draft RC. With a range of distinctive Refractor parallels, it shares the same look as the base Bowman Draft edition, adding chromium to enhance the overall design.

Altuve is pictured in a great action shot as he prepares to throw a ball, and the card has a thick black border. Both versions share the same card number (#11), which can be confusing for collectors. 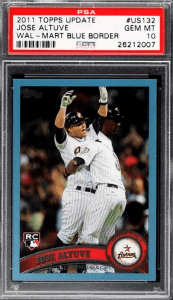 If you would like a free estimated value on a Jose Altuve baseball card email value@goldcardauctions.com.

Unless you’re looking at the rarest RCs, Altuve’s cards probably aren’t worth as much as you might expect.

Altuve was a major figure in the Astros’ cheating scandal which came to light in 2019, and his reputation did take a hit in later months. It also coincided with a lack of form, which some have suggested could be a form of the yips.

“Last year was hard on him, hard on all of us, there are things in life sometimes that people don’t think to affect us, and then indeed they do. I didn’t know him [prior to last year]. I respected him from the other side of the field, but I see him singing and he has that bounce in his step and he appears happy. He’s going to have a big year for us.”

In any case, it’s an explanation as to why his cards aren’t as coveted as they once were.

And even if he does make a comeback to his old self we would never touch his rookie cards based on the cheating scandal.