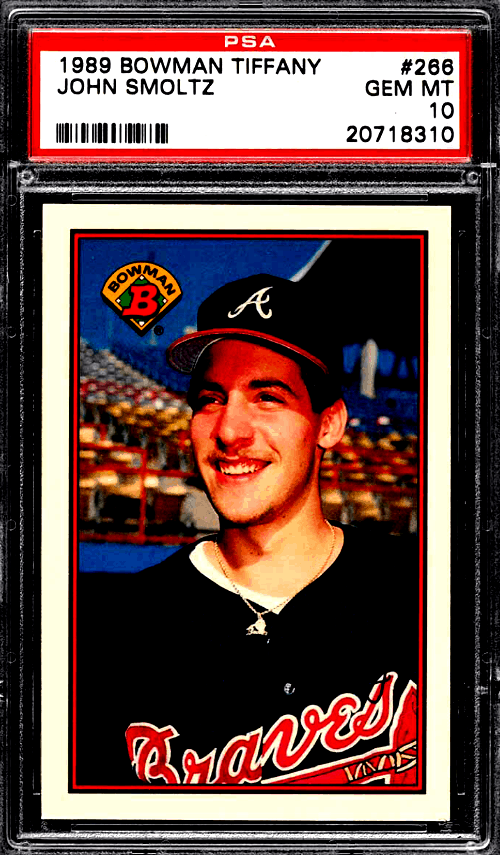 Smoltz was part of the Atlanta Braves “Big 3” pitching rotation that dominated the National League East for almost a decade along with Tom Glavine and Greg Maddux, before splitting his final season with the Boston Red Sox and St. Louis Cardinals in 2005.

Here are three top Smoltz rookie card options to keep an eye out for, along with investment advice looking at the future for his RC prices.

Smoltz actually has a good range of rookie cards, ranging from 1986 to ‘89. His first RCs were released by ProCards, focusing on his time as a minor league player. His first-ever MLB release came in 1988, while most collectors agree that his 1989 cards also count.

With cards from Bowman, Donruss, Fleer, Score, Topps, and Upper Deck, which are the very best overall?

Smoltz’s ‘89 Bowman Tiffany is a crisp card, with a great profile image of the player in his Braves gear. It has a thin black and red border, with a vintage Bowman logo, found on the top left corner.

An improvement on the base in most respects, the Tiffany set features gloss-covered fronts with a white cardstock reverse. Gem mint versions are actually fairly valuable, especially considering print runs from the time. 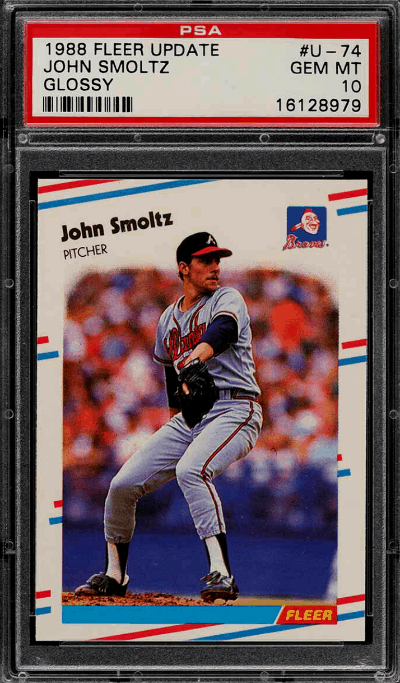 The first card featuring Smoltz in an MLB uniform can be found in the 1988 Fleer Update, which has a great design and a glossy version that has a premium coating. The border is white with red and blue stripes, matching the Braves logo on the top left corner.

As it has an action shot of the player pitching, the background is of a packed stadium. However, the focus is on Smoltz, as the crowd is blurred, and the background begins to fade away as it gets closer to the top. The Glossy version is an upgrade on the base card, with a premium finish and better card stock used. 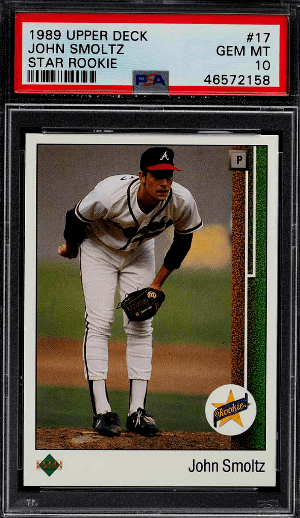 The final Smoltz rookie card to make the list is from the 1989 Upper Deck set. It’s not the most interesting card to look at, with a tepid action shot of Smoltz leaning forwards on the grass. It’s still his most popular RC by a decent margin.

The background is supposed to resemble a baseball field, while it has a thick white border, containing the player name and a UD logo. There’s also a Star Rookie emblem by Smoltz’s feet, helping to put any arguments about his RC year to bed.

Looking to purchase a John Smoltz rookie card? Email us at advice@goldcardauctions.com and we will help.

Undoubtedly one of the best pitchers from the era, Smoltz entered the Hall of Fame in 2015. His time with the Big Three will always be memorable, while the Braves retired his number 29 in 2012. So why haven’t his rookie cards hit the big time?

Smoltz’s RCs were released at the height of the junk wax era. This means that they were all overproduced, and even the premium versions of his RCs came with massive print runs. Gem mint versions will still sell for three-figure fees in 2020, but anything lower sees a large drop off in prices.

Values have risen in recent years, but it probably won’t be the best return unless you’re willing to hold onto your copies for a while.

Then there’s the harsh truth that Smoltz’s RCs lag ever so slightly behind Maddux’s and Glavine’s options, although that’s not a reflection of their relative ability.

As with many cards from this era, we’d look to options from the future if you’re on the lookout for an investment piece or two. There are lots of signed cards from the next two decades to keep an eye out for, with tiny print runs and player patches.

Another great option would be the 1991 Topps Desert Shield (#157), which had to get through a warzone and back, and is easily identifiable thanks to the foil stamping on the front of the card.