Many baseball historians consider Johnny Bench the best catcher to play the game. And honestly, it’s pretty difficult to argue against that. Ideally, his ’68 or ’69 card is an ideal HoF sports card investment option for those looking for safety with a good return.

We’ve seen many great catchers come and go since, but very few have had the staying power of Bench and Fisk. They also split time at other positions and were not actual authentic catchers.

It’s such a demanding position, from a strategical and defensive standpoint, that excelling on offense is extremely rare, and those that do are somewhat lacking on defense. Being stellar up at the plate and crouching behind it is as rare as a unicorn. Johnny Bench led the NL twice in home runs and finished with the most batted on three occasions.

On defense, Bench was a ten-time Gold Glove Award winner who skillfully handled pitching staffs, was an expert in pitch framing well before there was a term for it, and possessed a powerful, accurate throwing arm. 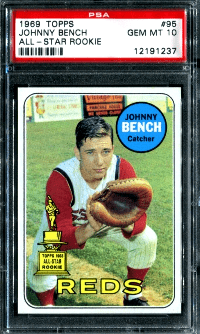 You can go back and forth on which is the actual Johnny Bench rookie card. This is his first solo card, so in that sense, this is the true Bench RC. However, a case can be made for the ’68 Topps card, and we’ll cover that in the very next item. This card is simplistic and minimalist in design, but sports cards didn’t have many bells and whistles back then. Given the layout and form, the eye first goes directly to the Topps All-Star Rookie Team trophy graphic.

The Topps All-Star rookie trophy graphic debuted a decade earlier in 1959, but in the 1970s, they modified the trophy with a slugger on top into a bowl or cup design. Is it me, or does young Johnny Bench strongly resemble actor Brendan Fraser in his prime? Or at least he does in this photo.

You could say the “true” Bench RC, as this is his earliest card in existence. He shares with a fella named Ron Tompkins, pictured in a Kansas City Athletics uniform. At this moment in history, Bench and Tompkins are on equal footing.

Then they went in opposite directions. By this card was issued, Tompkins had made five Major League appearances, with the A’s in 1965. He would return to the Majors in 1971 with the Chicago Cubs for a cup of coffee, and that was it. He recorded only two decisions, both losses, in his MLB career, which spanned just over 50 innings.

So it’s undeniable that his appearance on this card, besides a first-ballot Hall-of-Famer, is his claim to fame. This juxtaposition of these two baseball careers makes this a unique card.

The only card on our list from the modern era is the only one that thus throws back to bygone times. The 2021 Topps Project Johnny Bench baseball card focuses heavily on design, layout, and being aesthetically pleasing.

All art majors have to find this card interesting, and memorabilia collectors will like this offering too. The depiction of Bench himself is instead art house in feel, making this a unique card and one all Bench aficionados should try to acquire.

This card was issued as Bench was en route to winning the NL MVP award in just his third season in the league. His storied career began with his winning the Rookie of the Year award in 1968, and over this three-year period, you could really see that #5 was indeed on the verge of something special.

This photograph is basically akin to a “picture of a baseball catcher that comes with the frame.” The card design embodies the saying “less is more,” which is often attributed to architect Mies Van Der Rohe and the Bauhaus movement.

It doesn’t get any more 1970s than the font, colors, and design of this series of Topps. And Johnny Bench is the perfect player for the card-maker to champion here, as he’s got a wholesome, squeaky-clean image. This issue was amid a run in which Topps had a total monopoly on the baseball card market.

It also comes at a time when the Cincinnati Reds, one of the oldest professional franchises in all sports, anywhere on Earth, was on the verge of reaching its golden era. You can quickly feel both those vibes in this card.

This card has an exciting layout, photograph, and design, as it depicts Bench taking part in a few warm-up swings, presumably leading up to a theatrical, action-packed play.

Complete with autograph, the 2016 Bowman Chrome Johnny Bench card shown above is the Red Refractor, while the Gold Refractor is less common and even more stunning/valuable.

The design on this edition is unmistakable, as it is oh so ’70s. You first look at the graphic in the right corner, depicting a graphic of a specific position on the diamond in a fashion that evokes the opening titles of James Bond 007 film. (“For your eyes only?” No, as this is a card with mainstream appeal)

The silhouette is mysterious and captivating, and both elements are ramped up when you depict the catcher’s position. No one else sees as much of the diamond at all times, which is why this position yields more future managers than any other.

Another year in which he won MVP and another unmistakable design. It’s a bit “bold” or “loud,” and it evokes the old ABA (American Basketball Association) or throwback pieces about the 1970s than the actual 1970s itself. In other words, it’s a bit tacky.

Bench looks steady, and Eddie is as reliable as ever, so it brings an excellent balance to the card, making it much more manageable/attractive.

One of the few Johnny Bench baseball cards that provide an autograph plus a relic. It was printed in 2021 under the Topps Heritage Brand and is ideal for Bench fans who also are sports card investors.

An edition with an exciting design due to its symmetry and balance. The rectangular boxes convey a sense of movement and resemble flags or pennants.

The sense of movement gels pretty well with the photo, as you can truly feel the moment Bench is letting go of the bat and sprinting for first base.

It’s the perfect photo to work inside the layout, which conveys that sense of motion. This card preludes a year in which Bench was on his way to leading the National League in runs batted in, again, so yes, he was clearly on to things here.

That sense of direction would eventually see him finish out a career that got him on the MLB All-Time Team and Major League Baseball All-Century Team.

Johnny Bench is a legend among legends in Cincinnati, the place where he spent his entire career and, as such was inducted into the Cincinnati Reds Hall of Fame in 1986.

He has nothing left to accomplish, and that is a double-edged sword when you look at the investment potential of his cards.

They’re rock solid, air-tight when it comes to possessing baseball cards of an undruggable icon in an era when everyone is susceptible to being dragged. However, the flip side is that we can’t foresee any specific reason these cards might appreciate. What kind of activating event might spur a lot of additional interest in Johnny Bench and his cards?

Anything is possible, but it’s tough to say at this point. Right now, it feels like both the demand and the scarcity of Johnny Bench cards will remain very stable.