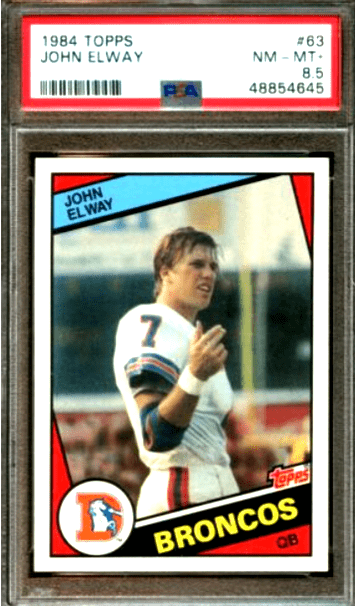 John Elway (06/28/60) is a retired quarterback who spent his entire playing career with the Denver Broncos.

A multiple record holder, he led the team to two Super Bowls and made nine Pro Bowl appearances over the years.

He later joined the Broncos as their general manager in 2011, taking the team to a third Super Bowl victory and his first as GM.

Elway is an undisputed NFL legend, but what are his best rookie cards, and are they worth anything? Here’s everything you need to know about John Elway’s RC options and an investment report looking at the next few years.

Only one John Elway RC hails from the 1984 Topps set. We’ve listed another vintage XRC card and a valuable rookie sticker below, so there is some choice to be had. 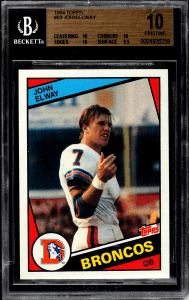 Elway’s only recognized mainstream rookie card, it’s a shame that there isn’t another option available! The 1984 Topps football set had a slightly strange design, with an image of Elway gesturing to somebody off-camera during a game.

There’s a simple white border, but another box inside is slightly askew. The card isn’t great to look at for extended periods as you turn your head diagonally to realign the image.

Regardless, even high PSA grades are relatively affordable, and it’s not like there are many other options for Elway fans. 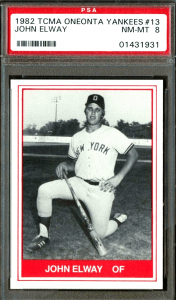 This is where it gets interesting. Considered an XRC, the 1982 TCMA Oneonta Yankees is a simple black and white card with red trim on the border. It was produced after the New York Yankees selected Elway in the second round of the 1981 Major League Baseball draft, 52nd overall.

The card features a grainy image of a young Elway on one knee, with a bat loosely held in his hand. It might not be the right sport, but it’s more evidence of Elway’s athletic prowess.

A sporadic release; it’s more expensive than the Topps card listed above. It’s a great investment piece with a unique story and a robust design. 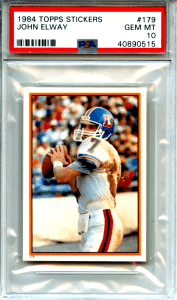 Elway’s sticker from the 1984 Topps set is another viable option with only one real RC to choose from. It features an action shot of the player preparing to make a throw with a white, yellow, and black border. The sticker number can be seen at the bottom; otherwise, there are no logos or names.

In recent years, prices have crept up, but only for the highest PSA grades.

Elway is a true legend and one of the few men to win a Super Bowl as a player and a GM. With only one RC on the market, you’d think high PSA grades would be more expensive.

The 1982 TCMA is arguably a better option from an investment perspective, and it does sell for a higher price. It’s somewhat understandable considering the scarcity and the interesting background, although it’s not the best piece for Broncos fans. Or maybe it is, considering it’s his most expensive card overall!

The coach recently turned 60 and still has a genuine love for the sport. However, he has struggled in recent seasons, despite introducing the next generation of stars like Drew Lock, which have helped to buy him time.

They’ll need to see more improvement if Elway wants to keep his role as GM, and the same is true if the team is to have any chance of making it back to the Super Bowl anytime soon. The team was listed at 66-to-1 odds to win Super Bowl LV by several respected bookmakers, which shows how much work they have to do.

Either way, the trio listed above could be an excellent mid-term investment depending on how the 2020 season goes, and they’re only going to get rarer as time goes by.