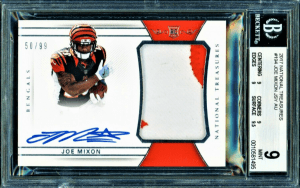 Mixon would have gone much higher if not for off-field issues that got him into a boatload of trouble while playing college football for the University of Oklahoma.

Having said that everyone deserves a second chance and he has seemingly gotten his act together and is doing well BOTH on and off the field in the NFL.

In 2019 he rushed for 1137 yards to go along with 287 receiving yards behind one of the worse offensive lines in the league.

If the Bengals can help him out at all upfront he should have a HUGE next few years as this kid is one of the most overlooked beasts in the NFL.

This is the card you want if you believe Mixon is going to have a breakout season in 2020… and the good news is it’s still very affordable… last we saw a BGS 9 was going for less than $100.

The card shows Mixon carrying the pigskin in his right hand in the posh Cincinnati Black Jersey (the Bengals for all their flaws always had one of the best jerseys in the league).

A great card for those betting big on Mixon in 2020. 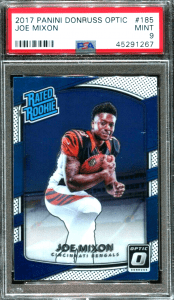 A great option for collectors not wanting to spend a ton of cash on a Mixon rookie card as these can come pretty cheap even at high grades (i.e. BGS 9.5).

Numbered #185 the card shows Mixon posing for the camera with the football in his right hand without a helmet on… we have always been big fans of football cards of players not sporting a helmet. 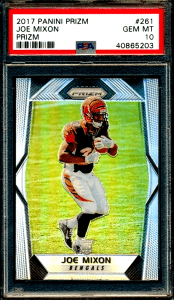 Numbered #261 the card shows Mixon stutter-stepping his way downfield deciding which way to make his cut… a great action photo of Mixon in his Bengals black.

As we alluded to Mixon rookie card values are dirt cheap right now compared to his potential.

We feel his rookie card values should be closer to the likes of an Ezekiel Elliot and he might just prove that in the next few seasons. 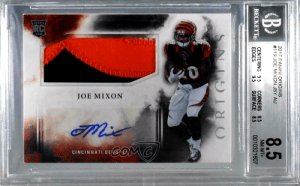 As we mentioned Mixon is one of the most overlooked running backs in the NFL and is just now starting to get some props.

For 3 years Mixon has suffered behind one of the worse offensive lines in football and has still but up very good numbers (although lacking touchdowns).

We feel 2020 should be a BIG season for Mixon as the Bengals have improved their O-Line somewhat and he is entering his prime years as a running back.

Having said that we wouldn’t go hog wild loading up on Joe Mixon rookie cards but adding a few of his cheaper cards (i.e. Optic, Prizm) might be a good flip opportunity if he starts the season red hot.