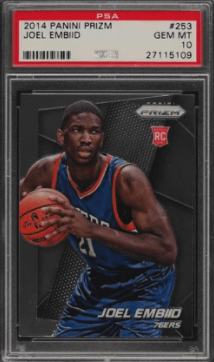 76ers All-Star center Joel Embiid is one of the best big men in the NBA. The seven-foot, 280-lb. Embiid can score and grab rebounds at will.

Embiid was born on 3/16/1994 in Yaounde, Cameroon. He started playing basketball at the age of 15, idolizing Hakeem Olajuwon. NBA player Luc Mbah a Moute discovered Embiid at a basketball camp.

Embiid played for the Kansas Jayhawks for a year. He averaged 11.2 points, 8.1 rebounds, and 2.6 blocks per game during the 2013 NCAA season. To no one’s surprise, he earned Big 12 Defensive Player of the Year honors.

The Philadelphia 76ers made Embiid the third overall pick of the 2014 NBA Draft. Since then, he has taken his game to unprecedented heights. He has averaged 24.1 points, 11.6 rebounds, and 1.9 blocks in 189 career games.

Consequently, Embiid has earned two NBA All-Star berths. He has also been on two All-NBA Second Team selections (2018 and 2019). 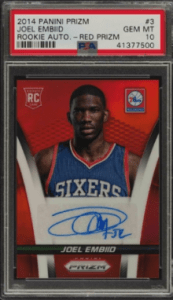 This is the most one of the more popular Joel Embiid rookie cards on the market. His photo, autograph, and slick red and white background graphics mesh together beautifully.

The back of the card reads, “A possible Embiid-Nerlens Noel combo on the floor awaits the 76ers when the rookie from Kansas debuts in the NBA. ‘I think it would be great,’ Embiid said. ‘I talked to Coach [Brett Brown] and he said he sees us as Tim Duncan and David Robinson at those positions. I think we are going to do pretty well.”

Unfortunately, that duo didn’t materialize. Nonetheless, Embiid is thriving in the City of Brotherly Love. 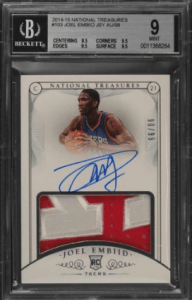 This is one of the more high-end Joel Embiid rookie cards. Expect to shell out an amount in the four-digit range. Nevertheless, you should get a nice ROI.

A photo of Embiid, his signature, and a game-worn rookie patch are featured on the front.

The back of the card reads, “Embiid, who hails from the African nation of Cameroon, credits fellow countryman and 76ers forward Luc Mbah a Moute for discovering him and mentoring him to pursue an NBA career. As luck would have it, the duo found themselves on the same team for 2014-15. ‘It’s still crazy,’ Embiid said. ‘And to him [it’s crazy], too. 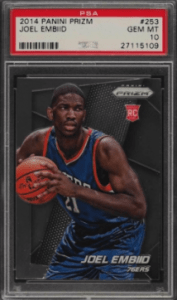 If you’re a casual collector of Joel Embiid rookie cards, this is a great choice – it won’t create a massive dent in your wallet like the National Treasures.

We like Embiid’s photo on the front – it shows his menacing scowl whenever he grabs a rebound.

The back of the card reads, “Even during his 2013-14 season with the Jayhawks, Embiid was already drawing comparisons to Hakeem Olajuwon because of his outstanding footwork. Those will be some big shoes to fill, but who says he can’t? After only five years of playing the game, he did enough to earn Philadelphia’s No. 3 picks.” 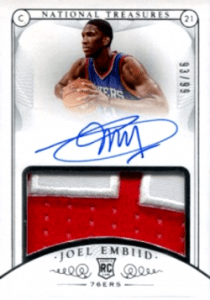 Making a basketball rookie card purchase? Need some advice? Email us at advice@goldcardauctions.com. 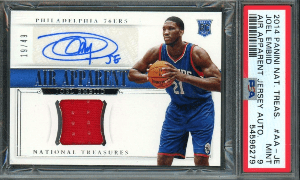 Make no mistake about it, Joel Embiid is one of the premier bigs in the NBA – he can score in the post, make the outside shot, defend, and rebound. He’s the total package. If he continues this pace, he could become a future Hall of Famer.

On the flip side, Embiid has had several injury issues. Bear in mind he sat out his first two NBA seasons due to a foot injury. He’s also missed some time due to a finger injury. These health issues could become a stumbling block for Embiid.

If your a huge Embiid or 76ers fanboy it’s OK to go ahead and drop a few dimes on a rookie card.

If your not you have better options when it comes to investing in cards (can someone day Patrick Mahomes Rookie Card).