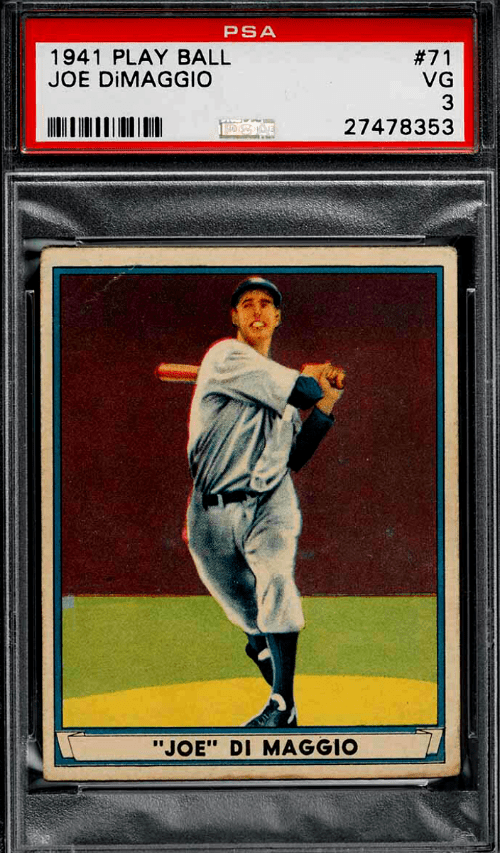 Joe DiMaggio (1914-1999) was a center fielder who played for the New York Yankees, ending his career as a three-time American League MVP and nine-time World Series Champion.

His 56-game hitting streak in 1941 is a record that still stands, and DiMaggio sadly passed away in 1999, due to lung cancer.

We’ve come up with a list of the top five Joe DiMaggio baseball cards, as well as investment advice if you’re tempted by his very best options.

As you might expect, the majority of his top cards are pre-war, but there are a few interesting releases from later years. Many were produced following his retirement in 1951, but it’s hard to beat an RC if you’re looking for the perfect mix of value and prestige. 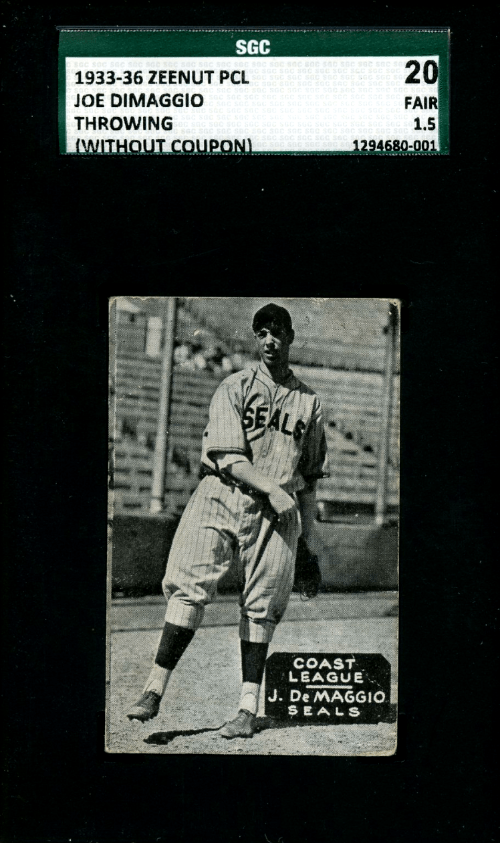 The first-ever cards to feature the player originate from the 1933-36 Zeenut Baseball set.

There are two to look out for, with DiMaggio either batting or throwing in separate black-and-white images. They spell his name wrong on both cards, listing him as Joe “De Maggio”. If the kit is confusing, that’s because he was still playing for PCL’s San Francisco Seals at the time.

|Must Read: Most Valuable Baseball Cards From The 1990s

They also had a coupon attached to the bottom originally, offering ‘valuable premiums’ if handed in and redeemed. Whatever the condition, it hasn’t stopped them from picking up in price in recent years, and they’re seen as a real piece of history for serious collectors. 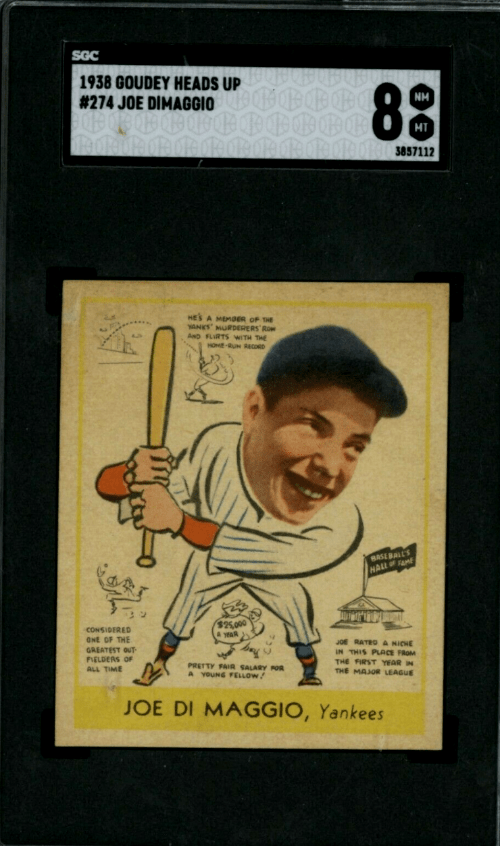 Another vintage set with two DiMaggio cards on offer, they both feature a photo of the Hall of Famer pasted on top of an illustrated batter. It’s a bit goofy, but it makes the card instantly recognizable, and it’s also in full color.

The first card (#250) has a plain background, while the second (#274) has a range of tiny illustrations along the edges. As you might have guessed, the latter is more valuable, and high PSA grades are worth six figures. 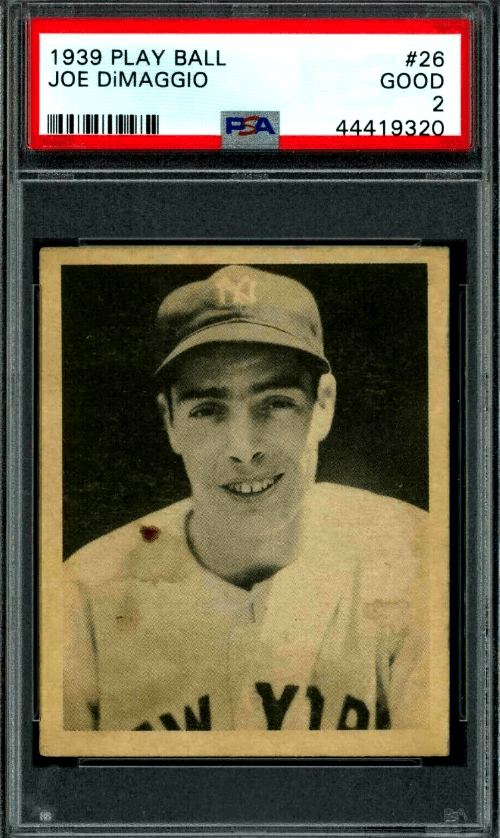 The 1939 Play Ball is an iconic edition, showing a simple black-and-white profile shot of the star as he smiles at the camera. Along with the ‘38 Goudey cards, they’re seen as DiMaggio’s ‘true RCs’, although this one is far cheaper in comparison.

|Trending: Why Invest In Baseball Cards?

There’s no team name or other info on the front, although you can see the Yankees logo on his cap and jersey. The smile is a marked change to the majority of his early cards and shows the player in a different light.

Next up is another Play Ball release, from 1941. It was the last major issue before WW2, and they upped their game by adding color to the cards for the first time. (However, they did use the same image seen in the 1940 Play Ball set.)

DiMaggio is pictured in a posed shot as he swings a bat, while it’s seen as a short print, which adds additional value compared to other cards from the era. The color was added later, with a deep purple background and two shades of green to make up the field. It’s another strong card, and it should definitely be on your radar. 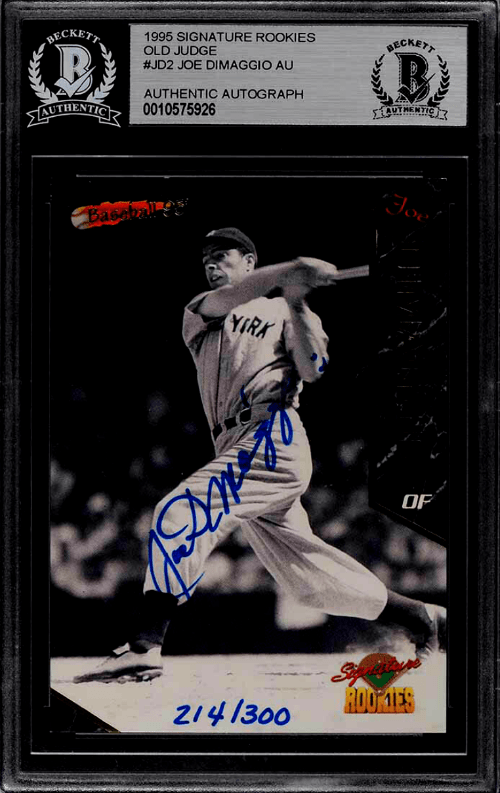 For a more recent option, we’re moving on to 1995. Unlike the earlier cards, this one has a ‘Joltin Joe’ auto, making it extremely popular with collectors. The on-card auto is signed in blue ink, filling a white section at the bottom.

Another black-and-white card, the only color is found on the logos, such as the ‘Signature Rookies’ on the bottom of the card, and his name, which is written in gold chrome in a segment on the right-hand side. They’ve gone with a classic image of DiMaggio at the plate, which makes it fit in with the older cards on the list, at least in terms of style. 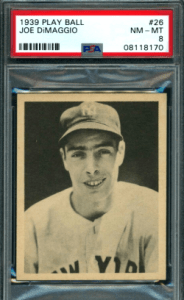 We assist individuals in acquiring high-end, remarkable sports cards with a superior return on investment. Email consulting@goldcardauctions.com to learn more.

DiMaggio is a true legend, with records that still stand to this day. He might not be as popular as the likes of Babe Ruth, but he’s undeniably an all-time great. His total of nine World Series rings is second only to Yogi Berra, who earned 10 with the Yankees.

Having made his MLB debut in 1938, he’s not featured in many of the early sets from the ‘30s, but he’s well represented in most major releases until his retirement in ‘51.

His early options continue to be seen as some of the most interesting cards in the hobby. They’re all valuable, although there are a number of decent signed post-war options to look out for which are more affordable.

For many of the ‘30s cards, any version is desirable, while prices will rise significantly if you’re looking at the best-graded options. We’d stick to PSA/BGS/SGC grades if possible, to eliminate any possibility of forgeries or alterations.

Pre-war DiMaggio cards are always going to be a hot ticket item, but they’re also a great long-term investment piece. Prices for the rarest cards continue to increase each year, and ‘The Yankee Clipper’ is no exception.

The best versions of the rarest cards always seem to be a good investment piece, although the high price of entry will stave off most would-be collectors.