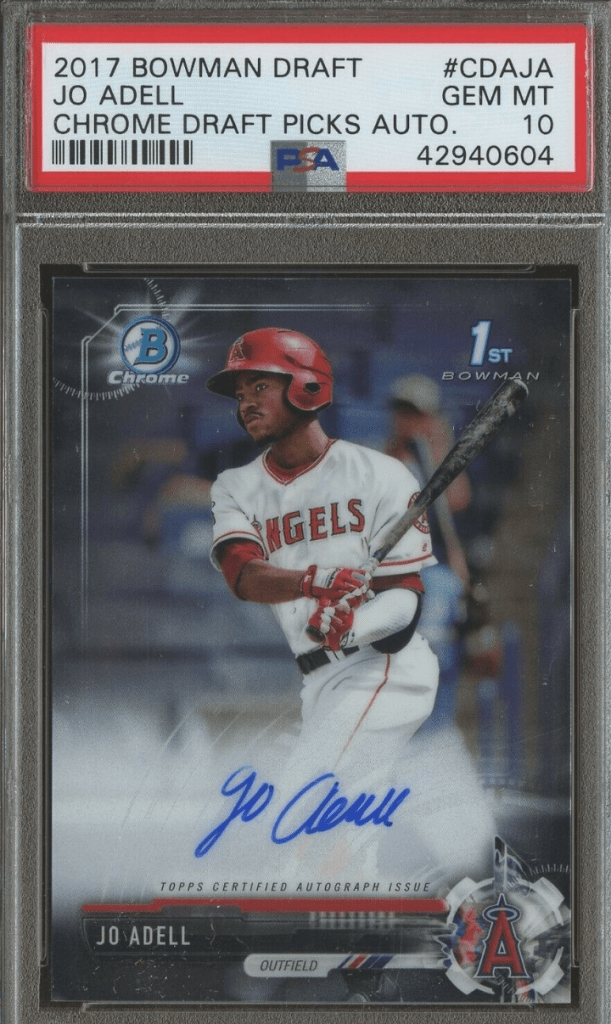 Jo Adell is a highly touted prospect in the Los Angeles Angels organization and should be roaming the outfield for them by 2020.

He is a true five-tool talent and plays centerfield (Adell was also named the Gatorade Player of the year in the state of Kentucky).

Obviously this guy has some talent.

Here are the top Jo Adell rookie cards (as of June 2019… more are sure to appear and will be updated as needed).

If you could only have one Jo Adell rookie card the 2017 Bowman Chrome Autograph Refractor would be it.

This card features Adell coming out of the box after a line drive base hit.

Don’t get us wrong, the refractors are sick cards, but don’t hesitate to settle for the basic 2017 Jo Adell Bowman Chrome card. 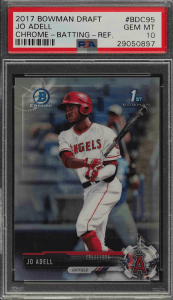 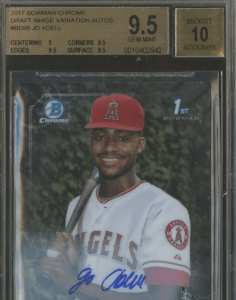 Bowman wanted to give collectors a “little something more to chase during their hunt for the top young stars” according to cardboardconnection.com. 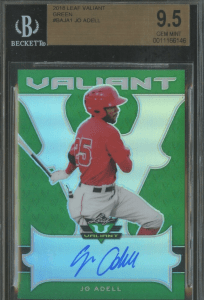 GoldCardAuctions.com debated if we should add a third Adell rookie card at this time but we could not pass up the beauty of the 2017 Jo Adell Leaf Valiant Green card.

This card not only has an autograph but has a super cool green background. Some people may not like the color but we love it here and plan on adding it to our collection shortly. 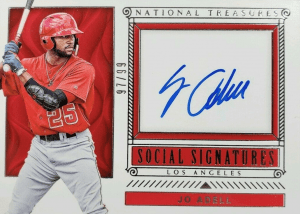 The card will cost you an arm and a leg but may well be worth it if Adell takes off as scouts predict him too.

We feel that Adell should fit in nicely with Trout (Mike Trout rookie cards) and Redon.

If the Angels could just get some pitching help they should make the playoffs sooner rather than later.

If we only had one Jo Adell rookie card to invest in it would be the 2017 Bowman Chrome Draft Jo Adell Auto.

Not only is this his number one rookie card but it also has his signature on it.

If this kid takes of the 2017 Bowman Chrome Draft Jo Adell Auto will be the cream of the crop.

Looking for NFL cards to invest in? Check out our Saquon Barkley Rookie Card and Josh Jacobs rookie card write-ups.

If all goes to plan Jo Adell should develop into a future All-Star for the Angels making his rookie cards a good long term investment play.

Please note with all rookies there is always risk involved and this should be considered before investing.