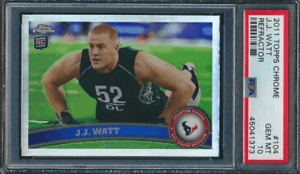 Justin James Watt is a defensive end for the Houston Texans in the NFL. He was the 11th pick in the first round of the 2011 Draft, and he’s a fan favorite for anyone who appreciates the more physical side of defending.

Watt’s breakout year came in 2012, and he became the first NFL player to ever total 20+ sacks in multiple seasons in 2014. Sports Illustrated named him Sportsperson of the Year in 2017, showing his progression.

Here are five of the best rookie cards to look out for if you’re looking to grab a couple for investment purposes.

We’ll start off with one of the cheaper options.

The 2011 Topps Chrome base card shows Watt exercising during the NFL Combine, and there’s an RC logo located on the top right-hand side.

A normal copy can be picked up for next to nothing, and even a PSA 10 grade will go for about $25.

If you just want a JJ card, you can’t go wrong for a couple of bucks, although there are numerous rarer parallels that boost the average price significantly.

If you’re looking for a signed card, his 2011 Prime Signatures has an understated design and a full-length airbrushed image of Watt. There’s a rookie logo on the right, and it’s part of a limited print run of just 199.

The back is similar in design, with a simple design and a paragraph noting his size and speed, as well as mentioning a solid performance for Houston against Jacksonville. You should be able to find it for under $100, so it’s another affordable investment.

His Contenders card is another decent option, packed with info on a landscape background. 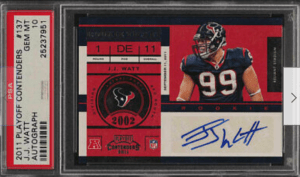 The front shows an image of the player in his 99 jerseys, while the reverse has a second image, along with stats and details about his strong start in the first three games of 2011.

It’s easy to see why Watt’s Exquisite card is valued highly by collectors and investors.

Firstly, as many of his 2011 cards have no signature whatsoever, the autograph further boosts the value.

Secondly, there are only 70 copies, it’s one of his rarest cards, and the autograph is written in gold.

There’s an image of the player ready to crunch an unfortunate opponent on the front, and a rookie signature on the bottom.

The reverse has a few token stats, but nothing particularly eye-catching.

The bottom of the card has a sticker autograph, while the top segment of the 2011 National Treasures card has a picture of Watt superimposed against a crisp black background.

If you look closely, you’ll be able to see a National Treasures logo in the top left corner, and a rookie logo on the opposite side.

The back has player info and 2011 stats, as well as details about how the team changed to accommodate Watt’s talents.

A BGS 9 recently sold for roughly $230, so there’s still serious interest despite the sticker.

After playing a decade for the Houston Texans where he became a symbol for not only the team but the entire city, Watt decided it was time to move on and signed with the Arizona Cardinals. It was a big move for Watt as many thought he would spend his entire career in Texas.

While Watt only appeared in seven games during his first year with the Cardinals before going down with an injury, he did force a fumble and instantly became a fan favorite. Card companies took advantage of this new legion of Watt fans and created many different products that show him in the jersey of his new team.

Here is the best J.J. Watt card from his time with the Cardinals for investors to get a strong return on investment. 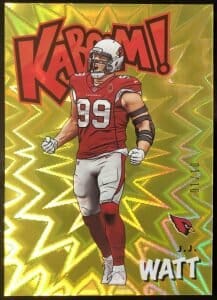 This is one of the best J.J. Watt cards from his time with the Arizona Cardinals so far. The Panini Absolute Football Kaboom set is loved by collectors because of its fun design and cartoon graphics. The set had a variety of different parallels with different print runs that are outlined below.

Must Read: Four Rookie Cards that could double your money in 2021

This gold parallel that is pictured above was limited to only ten copies and has an electric-looking background that pairs well with the red Cardinals jersey. Watt is pictured celebrating with his muscles on full display. The signature “Kaboom” graphic is printed in red on the top left portion of the card.