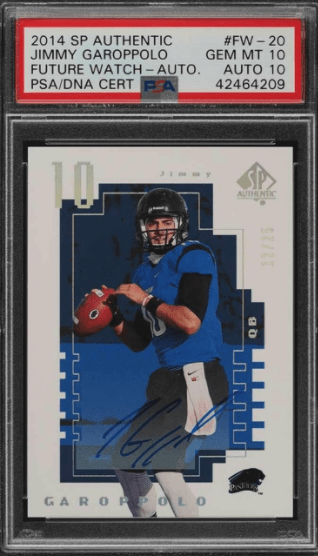 San Francisco 49ers quarterback Jimmy Garoppolo is the new face of the franchise. Behind a stellar 2019 NFL season, he helped the 49ers make it to the Super Bowl after 25 years.

Garoppolo was born James Richard Garoppolo on 11/2/1991 in Arlington Heights, IL. He comes from a family of four boys born to Tony and Denise Garoppolo.

Garoppolo suited up as a quarterback and linebacker for the Rolling Meadows Mustangs in high school. In 19 games as the Mustangs’ signal-caller during his junior and senior seasons, he passed for 3,136 yards and 25 touchdowns.

Garoppolo played four seasons for the Eastern Illinois Panthers from 2010 to 2013. During his freshman year, he passed for 1,639 yards, 14 touchdowns. He made it to the All-Ohio Valley Conference Newcomer Team that season.

He increased his touchdown passes every year. He passed for an incredible 53 touchdowns (and just nine interceptions) during the 2013 NCAA season. Thus, he surpassed the previous school record held by former Dallas Cowboys quarterback Tony Romo.

Garoppolo won several awards at the end of his senior season. These include the Walter Payton Award, the 2013-14 Ohio Valley Conference Male Athlete of the Year, and the 2013 College Football Performance FCS National Quarterback of the Year.

The New England Patriots made Garoppolo the 62nd overall pick of the 2014 NFL Draft. He signed a four-year, $3.5 million deal with the team. He appeared in just six games in 2014, throwing for 182 yards and a touchdown. He earned his first Super Bowl ring when the Patriots beat the Seattle Seahawks that year.

Garoppolo didn’t take the field that much during the 2015 NFL season. The following year, he started two games in place of the suspended Tom Brady, throwing for a combined 500 yards and four touchdowns. Garoppolo earned his second Super Bowl ring that year when the Patriots beat the Atlanta Falcons.

New England traded Garoppolo to the San Francisco 49ers for a second-round draft pick on October 31, 2017. He appeared in a total of six games, throwing for 1,560 yards and seven touchdowns.

The following year, Garoppolo played in just three games after he tore his left ACL during a Week 3 game against the Kansas City Chiefs. As a result, San Francisco won just four games in 2018.

Garoppolo enjoyed his finest year as a pro in 2019. He threw for a career-high 424 yards and added four touchdowns in the 49ers’ 36-26 win over the Arizona Cardinals in Week 11.

For the season, Garoppolo threw for 3,978 yards and 27 touchdowns. San Francisco won 13 games and clinched the NFC West title. 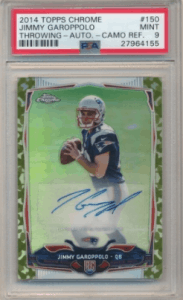 This is the most popular Jimmy Garoppolo rookie card on the market. The front of the card shows Garoppolo scanning the field for an open receiver. His autograph is scribbled below the photo. We like the lush, green background – it gives the card a refreshing feel to it.

The back of the card reads, “The Patriots sparked a second-round buzz by drafting Jimmy at No. 62. Though other favorite quarterbacks were rated higher, few questioned the wisdom of the century’s most successful NFL franchise. Like starter Tom Brady, Garoppolo is a cerebral field general with an exceptional ability to read the defense. He will be groomed as a potential heir apparent to the future Hall of Famer.”

This is another popular Jimmy Garoppolo-autographed rookie card. You can see his photo in blue and white background on the front.

The back of the card reads, “Hailing from Eastern Illinois, which also produced Tony Romo, Garoppolo is a rising star who earns high scouting evaluations for his fast decision-making and a quick release that leads to timely, accurate passes. He not only threw for 118 touchdowns in his career, but he has above-average mobility.” 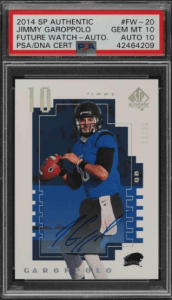 If you’re on the lookout for a college-based Jimmy Garopplo rookie card, this is it. The front shows Garoppolo in his Eastern Illinois Panthers jersey rearing back for a throw.

The back of the card shows an assurance from Upper Deck regarding the card’s authenticity.

The 2014 SP Authentic Jimmy Garoppolo #FW-20 is one of the most expensive, but it’s worth it, if you’re a die-hard Garoppolo fan.

Jimmy Garoppolo is the classic example of a quarterback thriving in a different environment – his career didn’t take off until he became a member of the 49ers.

Nonetheless, Garoppolo has been one of the reasons why San Francisco is a powerhouse in the NFC. With the Raiders moving to Las Vegas, many Bay Area football fans are pinning their hopes on Garoppolo and Co. The 49ers could become another dynasty.

For his part, if Garoppolo can help the 49ers another Super Bowl title, expect his rookie cards to increase in value. However, he has only one stellar season tucked under his belt. He must prove he’s the 49ers’ franchise quarterback year in and year out.