Jim Kelly (02/14/60) is a retired QB who is a first-ballot Hall of Famer, as part of a Buffalo Bills team that won the AFC for four consecutive seasons.

Kelly is undoubtedly one of the better quarterbacks in NFL history, while he had a great early spell with the USFL as well.

Here’s everything you could possibly need to know about Jim Kelly’s rookie card options, as well as investment advice for the next few years.

There are only three Kelly RCs that are worth discussing. We’ll begin with the earliest option, released way back in 1984.

The defunct USFL was an American football league that played for three seasons, 1983 through 1985. Kelly claimed the Central Division title in the USFL’s first year, winning both the MVP and Rookie of the Year awards with the Houston Gamblers.

Kelly’s USFL RC is a great niche item, from the Gamblers logo at the bottom to the ‘Premier USFL Edition’ tag at the top. The player is pictured with a football in hand, and Topps went for an obvious red white, and blue color scheme for the league that year.

Anything from a PSA 9 grade and above is going to be expensive, and the most valuable Kelly RC overall. You’ll also be able to find a 1985 Topps USFL card, numbered #45.

The second option to make the list was originally released in 1987, a full three years after the card seen above. This time, it’s an NFL-focused option, as the Buffalo Bills retained Kelly’s rights after the USFL folded.

The 1987 Topps card is still considered to be an RC and features a great image of Kelly as he smiles at something off-camera. There’s no helmet to impede the view of the player, and his name and team are found in blue and red boxes at the top.

For all intents and purposes, this card is the same as the 1987 Topps RC found above. The size is one giveaway that something is amiss, as this UK version (2 1/8″ x 3″) is slightly smaller than the norm.

“The changes are nominal, but it’s still a viable investment piece that sells for a similar price to the US edition.”

They’ve also added a small NFL logo in the bottom right corner, while it’s numbered to 72.

Looking to purchase a Jim Kelly rookie card but need advice? Email us at advice@goldcardauctions.com (include a minimum of 2 photos). 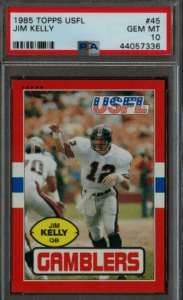 Kelly’s RCs might not have taken off, and his USFL options are actually more expensive than his NFL cards.

One possible explanation is that he helped lead the Bills to four consecutive Super Bowl appearances (Super Bowl XXV–Super Bowl XXVIII), as they became the only franchise to get to the final four times in a row. They’re also the only team to have lost four Super Bowls in a row, which has to have had an impact on his legacy.

Despite being a first-time ballot entrant in the Hall of Fame, his USFL cards are probably the best investment overall. They’re rarer than the 1987 editions and have decent prospects for providing returns in the future.