The Cleveland Browns drafted Jim Brown (2/17/1936) with the 6th overall selection in the 1957 NFL Draft out of the Cuse (aka Syracuse). He had a short but illustrious NFL career rushing for a mind-blowing 12,312 yards in only 118 games (that is an average of 104 rushing yards per game!).

On top of the insane amount of rushing yards, Mr. Brown also had 126 touchdowns (106 rushings, 20 receiving), 2,499 receiving yards, and a total of 14,811 total yards from scrimmage… yes Jim Brown was an absolute beast. Only Barry Sanders can come close to claiming equality.

Not only is this card his most valuable, but it is also a great-looking card. Numbered #62, the card feature Jim in an oval photo surrounded in black with a white border. Jim has the pigskin in his right hand and is posing as he is rushing the ball down the field.

His name (Jimmy Brown) sits at the bottom and is printed in yellow with the words Fullback (position) and Cleveland Brown (team name) underneath.

The 1959 Topps Jim Brown card is not as popular as the 58′ but is still a solid card nonetheless. Numbered #10 the card shows Jim with a mean-ass look on his face that seems to say I need to find a bathroom ASAP.

Those who are looking for a solid Jim Brown football card at a high grade without having to spend a ton of cash should turn to the 1959 card.

His name sits at the bottom, with each word alternating in a red and light blue (pretty cool). The words Fullback and Cleveland Browns are printed underneath his name.

Rounding out the top 3 is the 1966 Jim Brown Philadelphia football card. Numbered #41, the card shows Jim once again looking somewhat aggravated with a grunting-type look on his face… this is not a guy we would like to meet in a back ally.

Looking to purchase this card at high grades? Be prepared to pay through the nose as a PSA 9 graded 1966 Jim Brown Philadelphia football card will cost more than 8k.

How much is a Jim Brown football card worth? 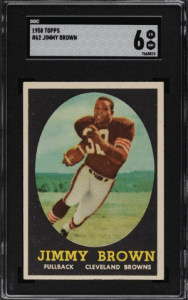 If you have an older Jim Brown rookie card (or football card in general) and would like an estimated value please email us at value@goldcardauctions.com.

Looking to buy a Jim Brown football card and needing advice? Hit us up at advice@goldcardauctions.com or follow us on Facebook.

Jim Brown was and is the best running back the league has ever seen and no one with a reasonable mind can argue. In such buying, a few of the 1958 Jim Brown rookie cards is a wise investment that should steadily grow over time.

Try to pick up the highest-graded Jim Brown rookie card possible for your budget. Normally we would recommend only an 8 or higher but given the age of his rookie card, we would be comfortable dropping that to a PSA 6 or higher… cheers!