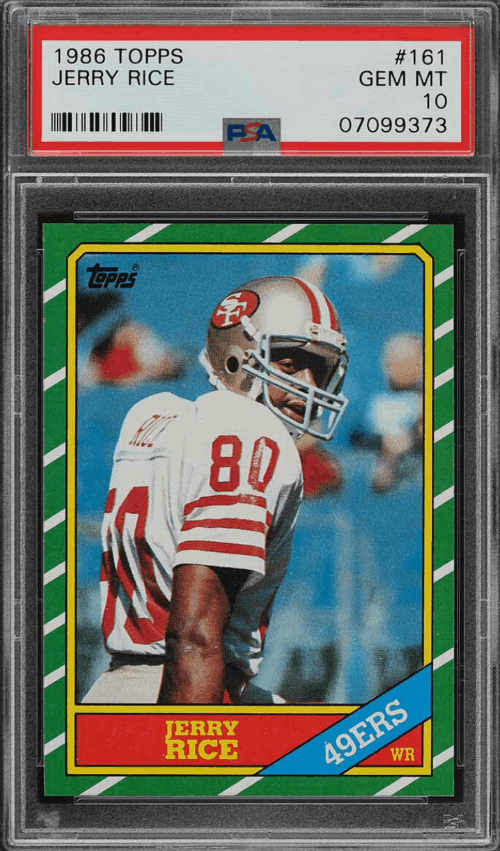 Jerry Rice (10/13/62) is probably the most excellent wide receiver in NFL history and a living legend in the sport. Rice spent most of his career with the San Francisco 49ers, winning a trio of Super Bowl rings and numerous additional accolades.

He still holds some records, from most receiving yards to most receiving touchdowns, and he entered the Hall Of Fame in 2010. Rice is arguably the NFL GOAT known for his work ethic and explosiveness. But is that reflected in the average price of his rookie cards?

We’ve prepared the ultimate investment guide for Rice’s rookie cards, including a checklist, values, and three great options to look out for. Along with his signature rookie card and the McDonald’s version, we’ve also listed a popular Rice card from his later years. 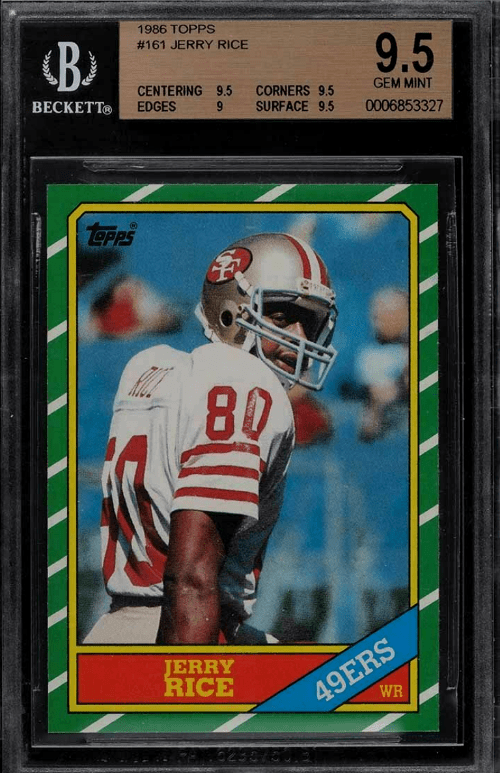 Featuring Rice decked out in a full 49ers uniform, the 1986 Topps is extremely valuable for several reasons. It’s a key to the 1986 Topps set and the only actual rookie card Rice has. There’s a green and white background motif that looks like a football field. It’s a strange design, and the green does highlight any flaws or chipping. Centering can also relate to problems when the cards were initially cut in the factory.

It might not have been the rarest option when it was first released, but the card has picked up steam in the 34 years. A PSA 9 grade sold for $586.00 in March 2020, while a gem mint version will go for over four figures. The quote on the back reads; 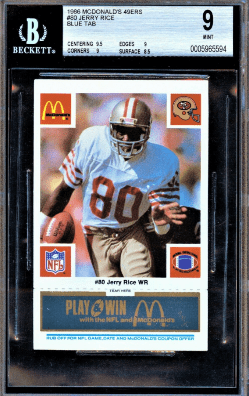 McDonald’s released a massive 2,813 card set in the mid-1980s, with scratch-off coupons at the bottom of the cards that were issued in four different colors. This means that multiple versions of Rice are included, although they tend to be ignored by most collectors. The reverse has heaps of information in a large quote;

“Career: The 49ers thought so much of this gifted receiver, they engineered a trade prior to the ‘85 draft, moving into a position where they’d have a shot at him… Set 18 NCAA Division 1-AA records while compiling 4,693 receiving yards in his four-year college career… Was over 1,000 yards for three successful years… Scored 51 TDs while making 310 receptions.

‘85 Highlights: Started slow, finished strong… Established a 49ers rookie record with 927 yards in receptions… Caught 49 passes for 3 TDs and a club-leading 18.9 average… Also ran the ball 6 times for 26 yards and had a 15-yard TD run”. 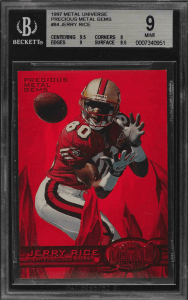 The most recent option on our list, Rice’s 1997 Red PMG, is limited to 150. It’s not a rookie card, and there’s no quote on the back. Instead, the player has a different close-up image, with stats along the side and the bottom.

Both a blessing and a curse, the shiny background makes it more alluring, but it also ruins quickly. The wax that holds the cards together isn’t ideal, while it’s another card that chips frequently. 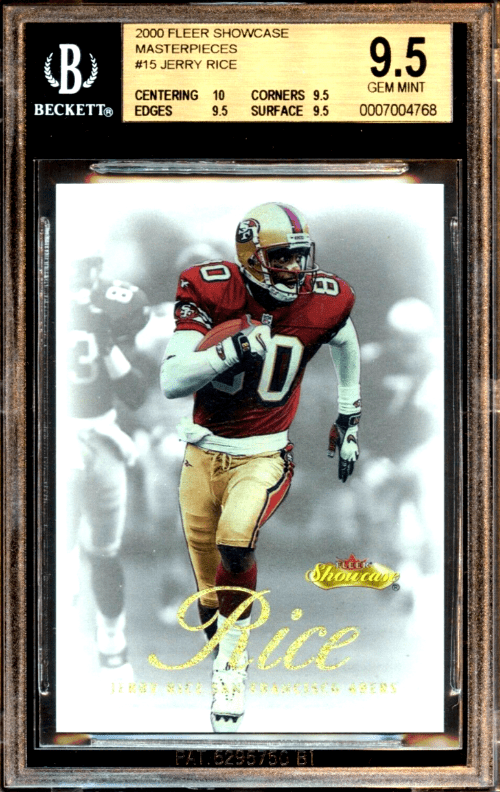 Rice is by far the best wide receiver of all time in the NFL, and his rookie card prices should steadily rise.

Must Read: Most Valuable Football Cards From The 1990s

If you would like an estimated value on any of his cards, please email us pictures to value@goldcardauctions.com (allow up to 72 hours for a response as we are swamped with requests). Looking to buy a Jerry Rice Football Card but need advice? Email us at advice@goldcardauctions.com

Jerry Rice has a single rookie card, hailing from 1986;

There’s also a card from the same year issued by McDonald’s, which isn’t seen as a true RC;

Indeed, the majority of 80’s cards are hardly worth the price of the glue they were stuck with, but Rice’s 1986 Topps is one of the exceptions to the rule. He holds too many records, was so successful on the field, and is still popular, even now.

With a single rookie card, it’s not like you’re spoiled for choice. However, that does make it easier for collectors, and its age means that there is some scarcity. (The McDonald’s option is a fun piece of memorabilia, but it’s unlikely to shoot up in price significantly enough to make it more than a footnote.)

There’s been nobody more adept at breaking records on the field, and there’s a reason why Rice is seen as one of the best ever. His cards are still undervalued when you consider his longevity, his legacy in the sport, and the fact that most of his records are likely to take at least a few decades to be broken.

Given the above, we think his rookie card is a substantial investment, especially if you’re looking at 8+ grades.