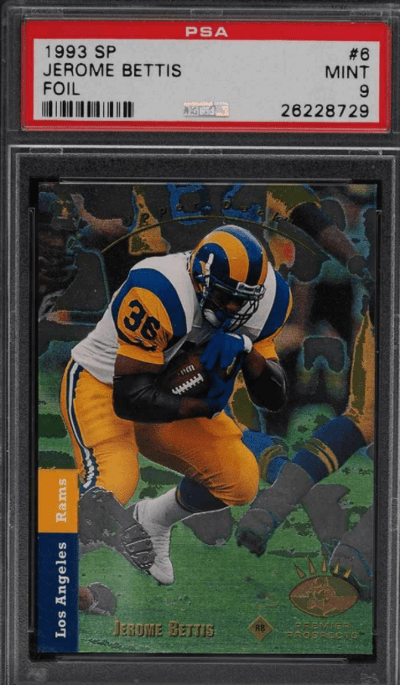 Widely seen as one of the greatest power running backs of all time, Jerome Bettis (02/16/72) is better known as ‘The Bus’ to fans.

As the name suggests, he was a one-man battering ram who won Super Bowl XL, as well as being a six-time Pro Bowler and two-time first-team All-Pro.

Here’s a roundup with three of the best Jerome Bettis rookie cards that money can buy, along with information about how and why they managed to earn a spot on the list.

Bettis’ rookie cards were released during the junk wax era, and you’ll have to look further forward if you’re hoping for a signed release.

However, his RCs still hold decent value in the present day, with none more coveted than the first to make the list. 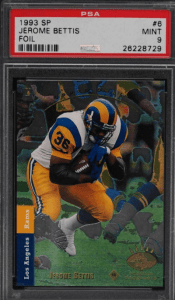 The ‘93 SP Foil has to be seen as the ultimate Bettis RC.

Featuring an action shot of Bettis as he powers forward, the image is full-bleed aside for a small stripe at the bottom that has the player’s name and position.

The foil finish and the lack of a hard border has led to prices rising into the four-figure range if you’re looking at gem-mint graded versions.

Given the number of cards that were released during the early 1990s, it’s worth noting that there is a significant dropoff when looking at lower grades. 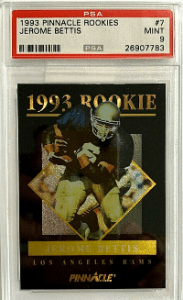 The black background and white text found on the 1993 Pinnacle Bettis RC mean that it’s another which is highly condition-sensitive.

It also features Pinnacle’s unique anti-counterfeit barcode on the reverse, which could be viewed through a Lenticular detector card to ensure authenticity.

(Pinnacle produced sets for MLB, NFL, NHL, NASCAR, and the WNBA for a decade until they went bankrupt in 1998.)

The overall design leads to a dark card, brightened slightly by the addition of a gold finish. 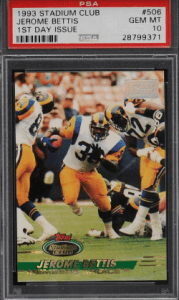 In an effort to increase perceived rarity, Topps put a foil label on the Stadium Club cards which were produced on the first day of issue.

“For the ‘93 collection, there were 2,000 cards which were stamped, including the Bettis RC from the set.”

You will be able to tell the difference instantly thanks to the imprinted foil label found in the top right corner.

It’s the most affordable option to make the list, as collectors seem to prefer the SP when looking at RCs wrapped in foil. 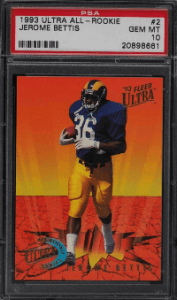 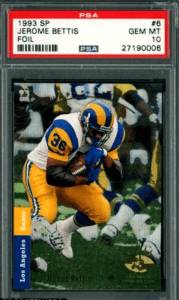 Email value@goldcardauctions.com to request an estimated value of a player.

Email advice@goldcardauctions.com if you would like advice in regards to purchasing cards as an investment.

Bettis’ rookie cards are more valuable than the average early 1990’s release, helped in no small part by the quality of his CV, along with strong design choices.

It’s easy to forget he was far from a lock for the Pro Football Hall of Fame and was elected in 2015 on his fifth try.

Some of his most valuable cards are also extremely condition-sensitive. The era in which they were released is one of the main reasons why, due to the sheer number of copies that were produced at the time.

(It’s no surprise that the third card is also limited, as there were only 2,000 cards stamped.)

We’d advise looking at gem mint copies for this reason, especially since there’s such a significant drop-off when looking at lower grades.

You might be better served looking elsewhere if you’re solely interested in making a profit, but Bettis’ RCs are a decent investment option for any Steelers fans.