Jeff Bagwell is one of the best baseball players of the 1990s and he enjoyed a successful 15-year career with the Houston Astros.

He was a premier power-hitter, had superb defensive skills, and that combination made him a stellar player. He was rewarded for his excellent career by being inducted into the Baseball Hall of Fame in 2017.

bagwell is the only player in mlb history with six consecutive seasons of at least 30 home runs, 100 rbis, 100 walks and 100 runs

In 1994 he became only the fourth NL player ever to win the MVP award by unanimous vote.

Bagwell’s career WAR of 79.6 ranks sixth all-time among first basemen and he had his uniform retired by the Astros in 2007.

Here’s everything you could ever want to know about Jeff Bagwell’s rookie cards including the three best ones, as well as the investment outlook for the next few years.

Jeff Bagwell had the unfortunate coincidence of having his rookie season coincide with the “junk wax era” of baseball cards which was characterized by a huge oversupply of cards.

Therefore, many of the cards carry little to no value today but luckily for investors there are a few premium products that have retained value. 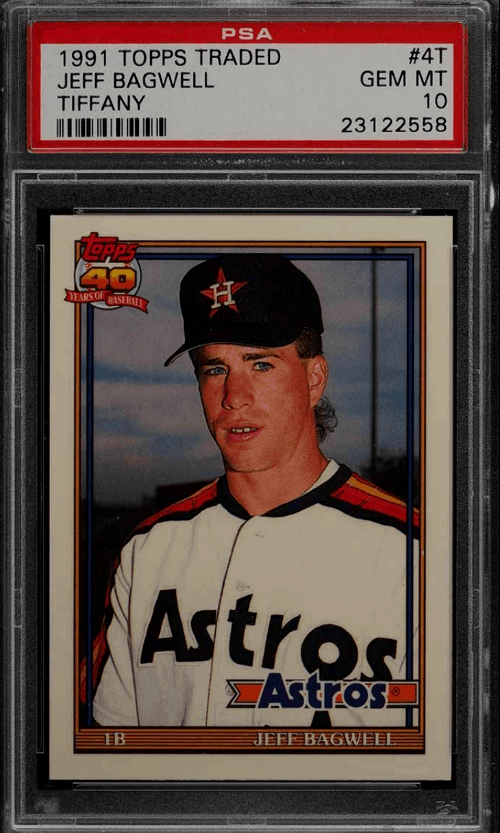 1991 marked Topps’ 40th year in business and this Bagwell card is one of the most impressive from the Topps Traded set of that year.

The card has an all-white border which frames a portrait of Bagwell where his luscious locks are barely visible underneath his baseball hat.

The Tiffany edition of this card would work as a stronger investment due to its smaller quantity which will help keep prices high. 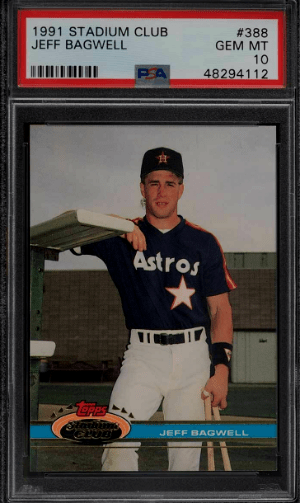 The 1991 Topps Stadium Club set is one of the more iconic in the hobby.

It was a time period where the quality of baseball cards was advancing quickly, propelled by the arrival of Upper Deck, and this was Topps’ foray into a more premium product.

There was a focus on photography in this set and the Jeff Bagwell photo is a classic as it shows him leaning on a diving board.

There’s a “Member’s Only” version of this card which was only available to people who signed up for the Stadium Club in which you would receive cards in the mail.

Both of these are strong investment options that weren’t as overproduced as many of the other cards in this era. 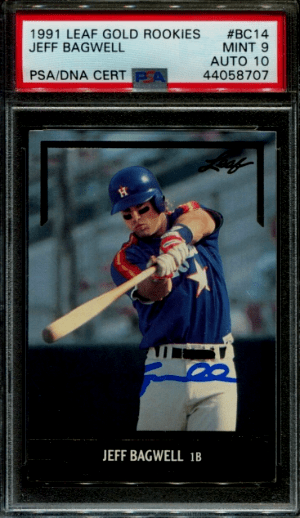 The 1991 Leaf Gold cards were some of the first inserts that collectors got to see in baseball packs.

The card shows Bagwell mid-swing in the blue Houston Astros jersey as he finishes his swing.

Bagwell did not appear in the main 1991 Leaf set, thus this is his only card from the 1991 Leaf collection.

This is another strong investment option and is perfect for those who are looking for something a little more unique due to the fact that it’s an insert. 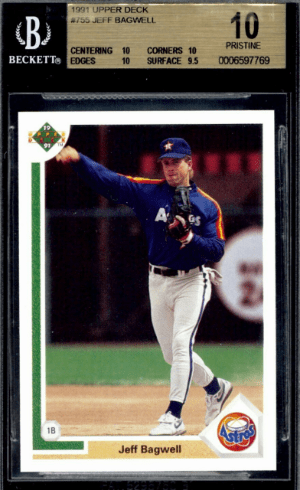 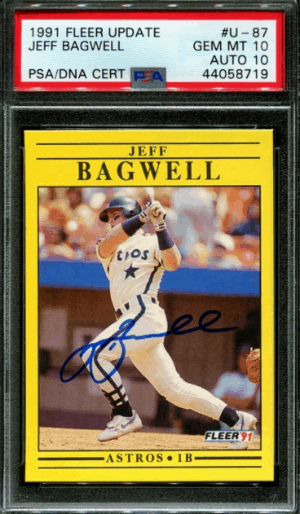 If you have a Bagqwell RC and would like an estimated value please email at value@goldcardauctions.com (include a minimum of 2 photos).

Bagwell has a strong case as the Houston Astros best player of all-time and holds many franchise records for everything from most home runs in a career to most RBIs in a career while wearing the Astros jersey.

For plenty of players who began their careers in the 1990s, the overproduction of cards has diluted the supply to such a level that the prices of their rookie cards are next to zero.

Bagwell suffers from this as well but luckily has a few different premium products that are still great investment options.

For those looking to invest in Bagwell cards, they should be sure to go with an option that offers something unique that helps differentiate it from the millions of cards produced in the 1990s.

Overall, Bagwell is a Hall-of-Famer that continues to stay around the game today in a front-office role with the Houston Astros, the team he enjoyed such an amazing career with.