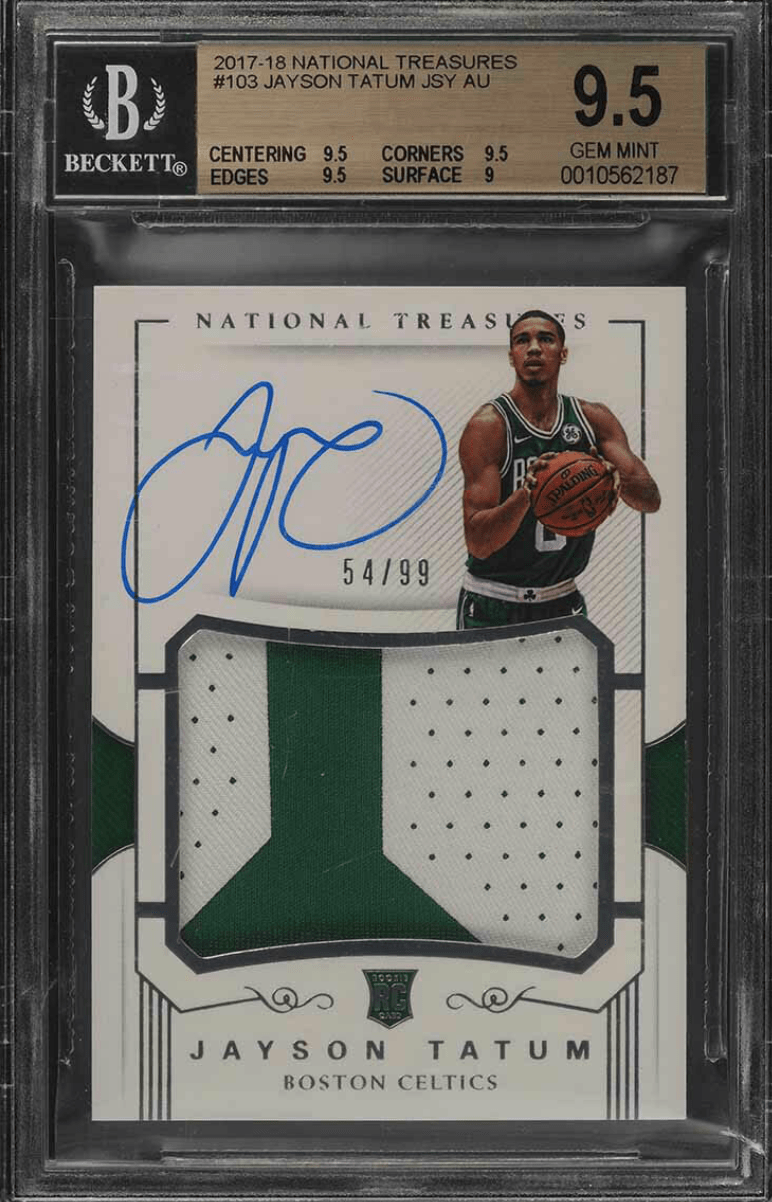 Jayson Tatum was born on March 3, 1998, in St. Louis, MO, and is quickly become a massive force to be reckoned with in the NBA Eastern Conference.

Before taking his career into hyperdrive, Tatum, played one year for the Duke Bluedevils and was then gobbled up with the 3rd pick in the 2017 NBA Draft by the Boston Celtics.

After a good (not great) first and second years, Tatum has exploded onto the scene in his 2019-20 campaign!

Not only has his points per game dramatically increased but so have the values of his rookie cards. Here are the best 3 Jayson Tatum rookie cards from an investment perspective. 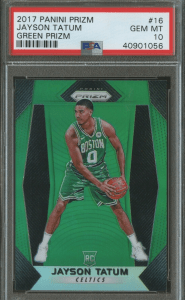 The 2017 Tatum Prizm Rookie Card is an excellent specimen of a rookie card and we love the green on green combo on the Green Prizm card.

Numbered 16 the card shows Tatum with the ball looking for an open man or a path to make his break towards the hole.

This card is available in a variety of parrels like all Prizm cards and is an outstanding investment for any collector (small or large budget). 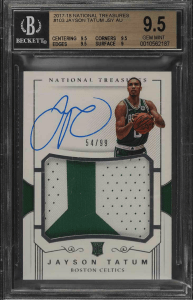 This is the card of all Tatum rookie cards. If you were lucky enough to buy this card back in his second season you have made a small fortune by now in profits.

Numbered #103 the back of the card reads “Tatum landed in Bostom prior to the 2017-18 season and instantly became one of the team’s most dependable options. A lot of players on this team come alive in the 4th quarter, and Jayson is one of them said teammate Jaelyn Brown. Jayson is one of those type players that you give him the ball in the clutch, he can make something happen.” 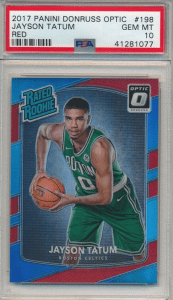 We picked this card by the slightest of margins over the Panini Select rookie card. Why? Simply because we like the looks of the card more than the Select (we have never been a fan of the Select format).

The 2017-18 Donruss Rated Rookie Jayson Tatum Celtics are numbered #158 and is a great GREAT investment for younger collectors or ones with a lower budget. 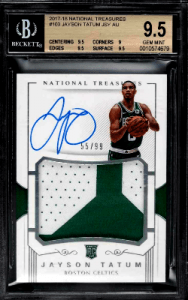 The most expensive Jayson Tatum rookie card is the 2017 National Treasures Jayson Tatum RPA /99 rookie card #103. Good luck obtaining this bad boy as it will cost more than a BMW at high grades.

Email value@goldcardauctions.com if you would like an estimated value of your Jayson Tatum basketball card. Be sure to include two photos at a minimum.

Tatum has really taken off in his 3rd NBA season and is definitely the star of the Boston Celtics. The only thing stopping him from being a MUST HAVE is we don’t believe the Celtics will be winning (or even going) any NBA Championship games in the near future (we could be wrong though!). Having said that we still have a strong buy rating on the kid.