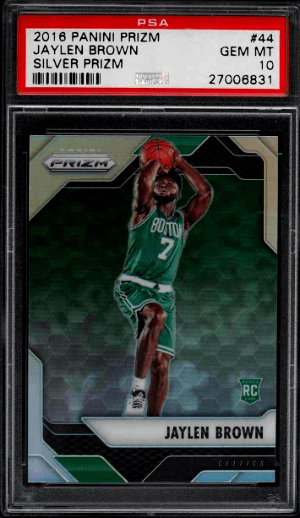 Jaylen Brown (10/24/96) is a promising shooting guard/small forward who has been contracted with the Celtics since being selected as the third overall draft pick in 2016.

Jaylen Brown Rookie Year Stats: 78 games, 20 started, 6.6 ppg, 2.8 rebounds, 0.8 assists. As you can see his rookie year was not a complete letdown but he also wasn’t putting up Luka Doncic rookie year type numbers either… but then who does at the age of 20? OH wait ONE PLAYER and his nickname is the KING! Must have investment: LeBron James Autograph Cards.

He hit a career-high 42 points along with five rebounds and four assists in a 126-107 win over the Memphis Grizzlies, which is the most through 3 quarters by a Celtics player since play-by-play tracking began in 1996-97.

It has caused both collectors and investors to take notice. Here’s a trio of the best Jaylen Brown rookie cards on the market right now, with something to suit almost every budget.

We’ve looked at auction data, as well as market trends to bring you a list with three top Jaylen Brown RCs. They all offer something slightly different, and there’s an option to suit almost every budget.

Brown’s 2016-17 Panini Prizm RC is first up. Rare parallels regularly attract heaps of bids, especially if the card has managed to achieve a decent grade.

This RC has a typical Prizm background that focuses on the player. Brown is featured in a lined image as he raises one foot to make a shot, and the green background meshes well with his Celtics jersey. You’ll also find a small, green RC logo at the bottom, and colored parallels will change the border color. 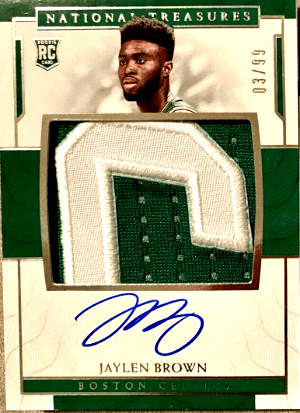 From the 2016-17 National Treasures Rookie Patch Autographs set, even the base version of this card is reasonably rare with just 99 copies produced. A clear step up in terms of prestige, you’ll find an on-card auto at the bottom, as well as a large player patch across the center.

Brown’s floating head can be found at the top, and the white and green color scheme will be a major plus for any Celtics fans. The NT card is limited to just three rare parallels, which can be found below. 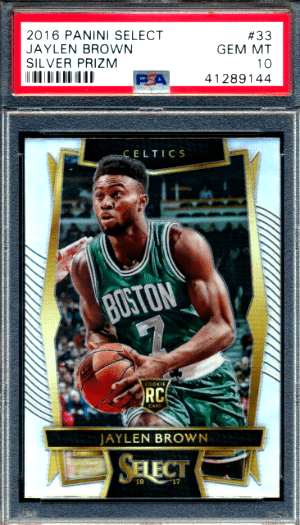 The final card to make the list is Brown’s 2016 Panini Select release. The most affordable option by a fair margin, it’s still valued highly by collectors when looking at serial-numbered parallel versions.

It features a great action shot of the player with a ball in both hands, and it feels like he’s popping out of the card thanks to a strong design. Once again, parallels will change the border color, making them easy to identify.

If you would like advice in regards to buying a Jaylen Brown basketball card please email us at advice@goldcardauctions.com. 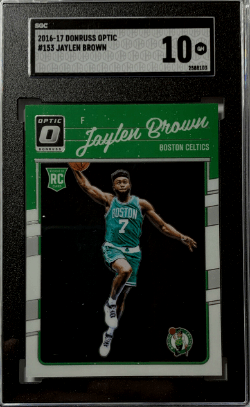 Brown has improved year-on-year and looks likely to make his first All-Star appearance in 2021. He might not be ready to make the starting lineup, but it’s more evidence of his progression in recent seasons.

He has carried the Celtics at times and is one of the best young players in the league. His offense is second to none, and he keeps adding to his game with each passing week.

“It’s not crazy to expect him to match and eventually exceed his career-high of 42 points, and he looks to be the future of his franchise.”

His RCs are getting to be a good investment, especially as he has yet to fulfill his obvious potential BUT we still want to see how the next few months play out before we declare an ALL-IN on Jaylen Brown RC.