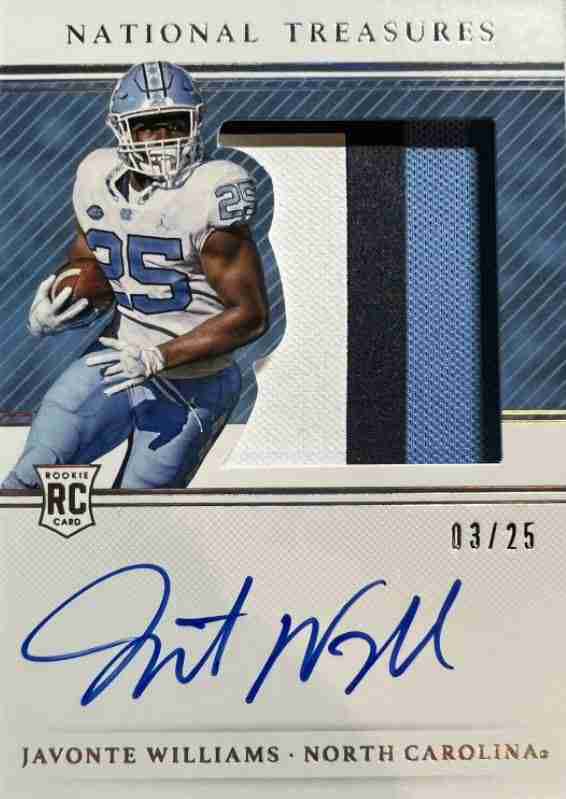 Javonte Williams is a running back for the Denver Broncos of the NFL.

He is just 21 years of age and has played only one season in the NFL to this point.

However, he has already established himself as one of the best young players in the game.

Before entering the NFL, Williams spent three years at the University of North Carolina.

There he had a very successful college career, finishing as a second-team All-American in his final college season.

In his final season, Williams was one of the best running backs in the country, and he was often considered a dark horse in the Heisman Trophy conversation.

While he did not win the trophy, he did set himself up well for the draft.

Unfortunately, Javonte Williams barely missed out on being a first-round pick. Instead, he was drafted in the second round, 35th overall, by the Denver Broncos.

Following the draft, Williams signed a four-year rookie contract with the Broncos. Entering his first pro season, there was no guarantee Williams would make the team. Williams needed to compete for the backup running back role, and he eventually won it.

In a backup role, Williams appeared in all 17 games, rushing for 903 yards and 4 touchdowns on 203 attempts.

Going into his second season, Williams has a chance to have an even better year.

His performance this year will affect the value of his rookie cards, especially when you consider the increased expectations of the Denver Broncos.

Here we are going to look at three of the best Javonte Williams rookie cards, their designs, and investment value.

Javonte Williams was drafted into the NFL a little over a year ago, and as a result, his rookie cards are still very new. So, the prices for each card have not stabilized or established themselves in any meaningful way.

With that in mind, it can be challenging to figure out which ones hold the most value.

Fortunately, we are here to help you by looking at three of the best Javonte Williams rookie cards on the market.

The first Javonte Williams rookie card that we want to look at today is from National Treasures.

This is a card that is slightly different from other options because it shows Williams in his light blue college uniform.

The card itself has a white border at the top and it reads National Treasures. Below it, you can see the image of Williams with a blue background.

The bottom half of the card features a large autograph from Williams. The autograph is guaranteed by Panini America.

This card is a valuable option because of the autograph and the fact that it features him in his college gear.

This card from Donruss comes from the Donruss The Rookies collection.

It features Javonte Williams in his white Broncos uniform as he rushes up with the ball towards the left side of the card. The border of the card is white with some grey and blue stripes.

There are logos or writing on two of the corners of the card including the Donruss logo and Rated Rookie logo.

Although it is not autographed, this is still a solid option that can be purchased for a reasonable price. 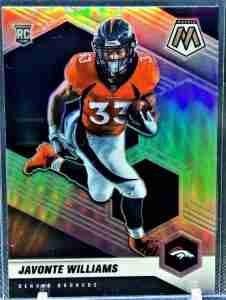 The final card we want to look at today is from Mosaic. This Javonte Williams rookie card has a unique design that features a fluorescent rainbow background.

It has a silver Prizm border, and it displays Williams in his orange Broncos jersey and white pants. In the chosen image, Williams is carrying the ball toward the right side of the card.

The card shows the RC logo, Mosaic logo, Williams’ name, and the Broncos logo in the card’s four corners.

The back of the card provides a short blurb about how his college quarterback got to see Williams go to work every play.

Additionally, it shows Williams’ college stats from his last season and his totals across three seasons.

This is another budget option that can be had for a reasonable price. It is not autographed, and as a result, it is a good option to invest in if you want to buy in bulk.

The most valuable Javonte Williams rookie card is the first one we looked at today because it has his autograph.

If you have a Javonte Williams rookie card that has not been graded, we can give you its estimated value.

Leave a comment below or send us an email, and include two photos. Do this and we will get back to you as soon as possible!

Javonte Williams looks ready to have a great career in the NFL. He had a great first season, and as a result, it is reasonable to expect him to improve in the coming years. If he continues to improve, his cards will rise in value.

Another thing that drives up value is winning, and that is something we can expect from Denver in the immediate future.

The Broncos recently traded for Russell Wilson, and in doing so, added themselves to the championship conversation. If the Broncos can win a Super Bowl, Williams’ cards will be even more valuable.

How Much Is a Javonte Williams Rookie Card Worth?

Most Javonte Williams rookie cards are relatively cheap and can be purchased for double digit prices, and sometimes under a dollar. However, the cards in pristine condition are sometimes listed for over $100 in 2022.

Which Javonte Williams Rookie Card Has the Most Value?

Since he is such a young player, there is a chance this will change over time. However, in 2022, the National Treasures card is currently the best investment option.

When Was Javonte Williams a Rookie?

Javonte Williams was a rookie in 2021, and he played for the Denver Broncos, appearing in all 17 games.