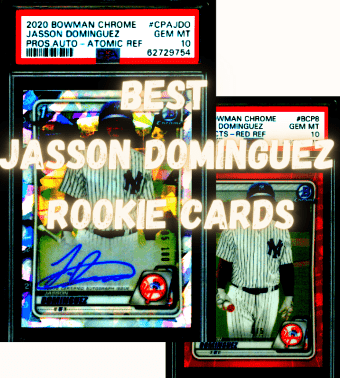 The New York Yankees signed Jasson Dominguez (2/7/2003) in 2019 as the #1-ranked international prospect. The Dominican outfielder has a compact swing, elite bat speed, and a name ripe for pinstripes (he was named after former Yankee Jason Giambi).

Hobby sharps (to include us) are forecasting a path similar to one Wander Franco regarding Jasson Dominguez’s way to the Big Leagues.

Although will NOT see the house that Ruth built in 2022 his rookie card values are some of the highest in the hobby. That alone should tell you how anticipated this young stud is in the Big Apple.

As one of the top youngsters in the game, Dominguez is a prospect that card collectors have taken note of. 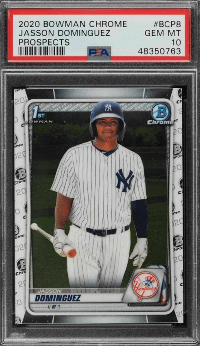 The Bowman Chrome and base Bowman rookie cards feature the same image as Dominguez.

The well-built outfielder dons the pinstripes, but the double-eared minor league helmet gives away his prospect status. He stands with both arms dangling, his right hand gripping the barrel of a tan wooden bat.

The refractive background is one feature that separates this Bowman Chrome from the base prospect card. The outside border is a combination of greys, blacks, and whites, with the Bowman “B” logo, featured on the right and left sides.

And Dominguez is 2-for-2 (pardon the subpar videography… I’m too old for this 😂) pic.twitter.com/w0KICNstdj

A Yankee logo is part of the nameplate on the card’s lower portion. The “1st” emblem in the upper-left corner is another important feature, as it confirms that this is Dominguez’s first Bowman Chrome.

Anytime you’re scouring prospect and rookie cards, you have to identify the 1st Bowman Chrome. 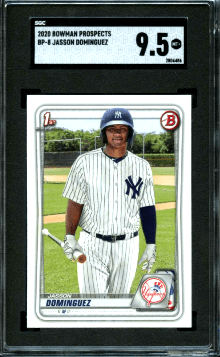 We won’t go in too deep on the design—it features the same layout and image as the Bowman Chrome #BCP8. However, this one lacks the chrome finish.

Don’t let the low-key design fool you, this is a high-quality card that the collecting community has great respect for. 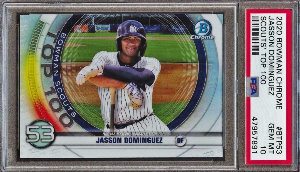 You know Jasson Dominguez is a promising prospect by this fact: card companies have had him pose precisely for their prospect cards.

Dominguez rests his right arm on the knob of an upside-down bat, with his sleeved left arm rested atop. His minor league helmet stands out, with the left side featuring an extended ear cover.

The card’s design is reminiscent of a SportsCenter Top 10 Countdown. Around Dominguez’s photo is a circular gold graphic. Different layers of the circle read “Bowman Scouts” and “Top 100” in multi-sized fonts.

Let’s be honest: we’re here for the auto. It steals the show atop Dominguez’s pinstriped abdomen. Next to the autograph is the all-important “/50” print run indicator.

This card makes the list largely because of the autograph, but the design here is high-caliber.

The 2020 Jasson Dominguez Select Signatures RC #19 is a card for collectors who don’t mind some flash.

The card shows Dominguez from the rear, completing a swing in all-black, logo-free garb. You can’t even see his face, but that’s no problem considering the card’s eye-popping appeal.

Select went with a stained-glass-style design, and it works. Multi-colored, fragmented panels give off a largely gold appearance, but other hues (silver, green, pink, purple) are also present.

An arch-style nameplate in between The Martian’s image and the autograph below reads “Jasson Dominguez“.

The signature is written on a sticker, but it fits seamlessly in the card’s design. It’s a welcome feature within a card that feels more like art than a trading card.

It’s the type of card that is not only potentially valuable but also fun to own. 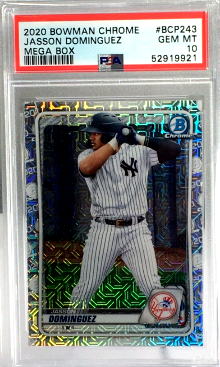 Due to its on-card autograph, Bowman brand name, and limited print run, expect to pay a pretty penny for this unique offering from Bowman.

If you can swing it, you’re getting one heck of a card.

The identifying feature is a refractive backdrop designed like the tin roof of a speakeasy. The autograph also captures your attention, written on a translucent white plate at knee level of Dominguez’s photo.

A nonchalant J-Dom appears to trot around the bases, face obscured by his navy Yankee helmet. The Bowman and Yankee logos both make appearances.

The photo selection is questionable at best, but how can you complain about a print run of 25 and an on-card autograph? The better question, perhaps, is can you afford it? 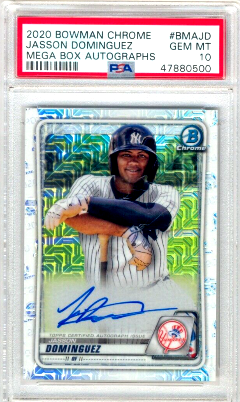 Did we mention that Bowman Chrome dominates the market on Jasson Dominguez rookie and prospect cards?

The 2020 Jasson Dominguez Bowman Mega Box Refractor Auto RC features one of the better images of Dominguez that you’ll find. He’s in full pinstripes with Yankee logos visible on both his jersey and helmet.

The Martian gazes at the sky (presumably at a bomb he personally sent into orbit) after completing his left-handed swing.

The card design and color scheme fit perfectly with the Yankee pinstripes. This is truly one of the standouts from Dominguez’s crop of rookie offerings.

The 2020 Jasson Dominguez Upper Deck Exquisite Collection Auto RC definitely has an abnormal design layout. Rather than using most of the card’s surface area, it uses barely any.

The image of Dominguez is a chest-up headshot with the young Yankee’s arms crossed atop the knob of the bat. The image has a multi-colored tint that gives it a retro vibe.

No logos are visible, a true indication of a prospect card. Aside from Dominguez’s pocket-sized photo, the rest of the card is white space.

Displayed prominently on this white backdrop is Dominguez’s blue signature. Other features of the card include a silver UD logo, an /99 print run marker, and an “Exquisite Rookie Autograph” banner.

Even with so few features, it comes together quite nicely.

Find one Panini Prizm Color Blast that isn’t an absolute stunner of a card…you can’t.

The 2020 Jasson Dominguez Prizm Draft Picks Color Blast SP is technically an insert, but inserts can be quite valuable.

The color blast has a heavy dose of purple but also includes virtually every hue along the color gradient. The upper-right corner has a black-and-silver, two-font nameplate.

There’s no way around it: color blasts are phenomenal cards. This one is no exception. 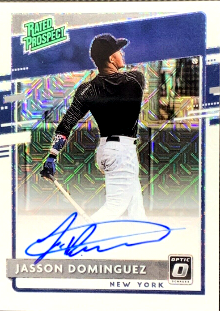 The 2020 Jasson Dominguez Donruss Optic Rated Prospect Green Mojo Auto RC (a mouthful, huh?) is one of the more budget-friendly entrants on this list.

The Green Mojo parallel is as you’d expect: green. It combines with blue accents to create a thoroughly aquatic feel.

The image of Dominguez is the same featured on the Select Signatures RC #19. The switch-hitting slugger watches a ball sail from the right side of the plate.

There are no logos or Yankee garb—just a logo-level image of a future superstar ready to conquer the big leagues.

The 49-card print run is a major asset to this card’s value. 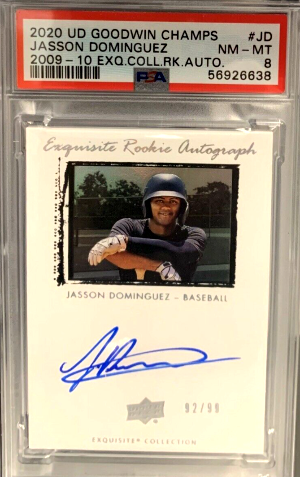 With a horizontal layout, an airbrushed image of Dominguez features the teenager in braces. He looks to his left, grinning slightly in a logo-less navy ballcap.

This variation of the UD Goodwin Champions RC has a red, yellow, and white ovular backdrop. A round red border contains that backdrop and transitions into a black, red, gold, and white nameplate.

We’ve got to mention the autograph, which is written on a faded white mantle at Dominguez’s neck level.

This is an interesting card that won’t necessarily break your bank.

Collectors are high on Jasson Dominguez. With a player base composed largely of international stars, you have to be damn good to become a top overall international prospect.

Investors Rating/Risk Return – 3.01 out of 5 with ultra-high risk and ultra-high return potential

With this status, many see Jasson Dominguez as a can’t-miss star. Throw in the fact that he’s on the New York freakin’ Yankees, and it’s clear to see why his prospect cards have garnered significant interest.

Autographed Bowman Chromes are the market leaders, but several other cards listed here will be beyond the price ranges of casual collectors.

Looking back on the massive economic returns of cards for superstars like Mike Trout, you’d kick yourself if you had the chance to invest early and chose not to.

Those who are high on Dominguez are not taking the chance that they’ll miss out on the next superstar.