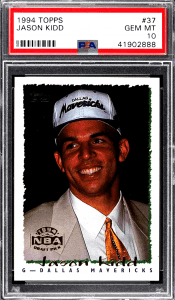 Jason Kidd (aka J-Kidd aka Ason Kidd aka The Engine aka The Kidd aka Mr. Triple Double) is a 10 times All-Star, 9-time All-Defensive Team, 6-time All NBA Team, 1994 Rookie of the Year, and won the NBA title 2010… he is one of the games best to say the lease.

Kidd is considered one of the top well-rounded pure point guards of all-time in the NBA and a top floor general… if we had one player to lead a team Kidd would be in the top 5.

Let’s take a look at the top 3 J-Kidd rookie cards from an investment standpoint.

Numbered #37 and pictures Jason Kidd on draft night with his classic grin.

A good card for collectors interested in adding some Kidd to their investment portfolio without spending a ton of cash. 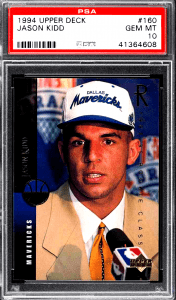 Another draft night card by Upper Deck with a much more serious look on his face… more than likely answering a question on how much value he can add to a struggling Mavericks team at the time. 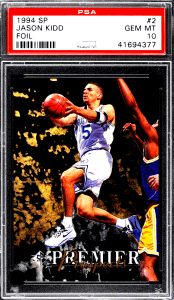 Here is the most expensive Kidd rookie card as it can top out at over $300 in the die-cut version.

Numbered #2 the card shows J-Kidd going in for a layup against the Lakers. 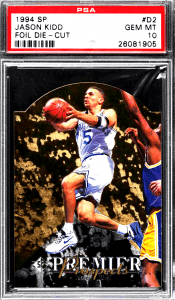 On average you should be able to get a high-grade Jason Kidd rookie card for $100 to $200.

Jason Kidd was one hell of a player and had a stellar NBA career.

Many forget he beat LeBron James, Dwyane Wade, and Chris Bosh in 2011 to win his only NBA Championship ring with the Dallas Mavericks.

The worth of his rookie cards is held back by his less than gaudy points per game scoring numbers and the fact he only has one ring.

The sad fact of the matter is a player who scores a ton of points (i.e. James Harden) usually gets more love vs a player who makes his team better via assists, rebounds, and floor leadership.

J-Kidd rookie cards will increase in value long term but not enough value to make us buyers.

Looking for a top NBA investment: Kobe Bryant Rookie Cards are a no brainer