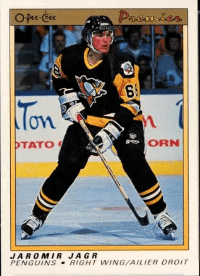 Jaromir Jagr was born on 2/15/1972 and was drafted by the Pittsburgh Penguins with the 5th overall pick in the 1990 NHL Entry Draft.

Jagr repaid the Penguins with 11 seasons with 439 goals and 640 assists. Jagr went on to play a mind-blowing 24 years in the NHL and had a total of 1921 points. After playing his final game in the NHL with the Calgary Flames in 2018, Jagr joined his home team Rytiri Kladno, where he still plays professionally today. Simply amazing.

Here are the best Jaromir Jagr rookie cards for your investment portfolio. If you have questions about our top-rated Jarg rookie cards, email us at info@goldcardauctions.com. 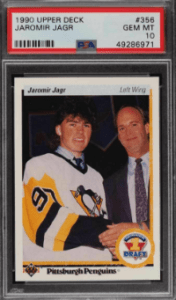 If you grew up in the ’90s and collected sports cards, you have to have this card imaged burned into your memory. We remember seeing this at sports card shows across the country back in the day. The card is #356 and shows Jagr shaking hands after being drafted by the Pittsburgh Penguins. 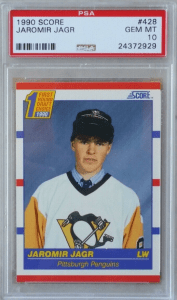 Another memorable Jagr rookie card and our favorite of all the Jaromir rookie cards. If you can obtain the Canadian version in a PSA 10 that will maximize the ROI of the card over the long run and would be pretty rare.

Must Read: The 1990 Stanley Cup Hologram Card is the GOAT of Hockey Cards

The card is #428 and shows Jagr with a dazed and confused look on his mug while posing for the picture. The Jagr rookie card is the top card in the set and its glossy appearance helps set it apart from others. A must-have for Jagr fans.

If we’re not mistaken, we believe this is his most expensive rookie card. The 1990 Jagr O-Pee-Chee Premier RC shows Jagr waiting for the biscuit in preparation for a goal-scoring opportunity.

WOW! This card is a blast from the past. Pro Set was a super popular hockey trading card set back in the early 1990s but quickly died out like the dinosaurs. Numbered #632 The Jagr Pro Set rookie card shows Jaromir rushing down the rink in pursuit of the puck.

Jagr’s rookie cards are not all that valuable and are an excellent bang for the buck, considering he is one of the best NHL players of all time.

Not a Jagr fanboy? Check out Wayne Gretzky rookie cards or Mario Lemieux rookie cards and make a bundle of cash.

As mentioned above, Jaromir Jagr rookie cards are a savoy buy right now as you can get them for less than $50 in PSA 10 condition.

If you have any questions in regards to investing in Jaromir Jagr hockey cards, please email info@goldcardauctions.com

The only negative (and it’s a big one) is Jagr started his career when cards were printed in mass amounts. However, we still think Jagr rookie cards are a SOLID buy at these levels and would recommend buying while they are on the cheap. If possible, try to buy one that will set it apart from the others (i.e., 1990-91 Upper Deck Hologram Jaromir Jagr card).