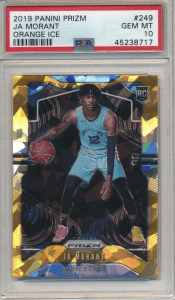 Memphis drafted Temetrius Jamel “Ja” Morant second overall out of Murray State in the 2019 NBA Draft. He’s one point guard who can do it all – create his own shot, shoot from the three-point area, and find the open man.

The Grizzlies have so much confidence in Morant’s abilities.

The rookie averaged 17.5 points, 3.5 assists, and 5.0 rebounds through his first three NBA games.

This is a good sign for Memphis head coach Taylor Jenkins and Co. If Morant can keep this up, he should help the team return to the playoffs.

This is a must-have card for all Ja collectors.

The card features Mr. Morant with the ball, scanning the court for an open player or to take the lane by storm!

Panini has numbered the card 249 and the back reads “Morant loves using his super tight handle to draw a chorus of oohs and aahs from fans from before finishing at the rim with an empathic jam or dishing out a dazzling dime to a teammate. A master of the dribble, he can control the ball like it’s tied to wrist with a string and fake a defender out of his shoes with either hand”.

Buy this card now and buy a lot of them if you like a HIGH ROI.

We like this card for three simple reasons: low supply, low price, and high grade. First off, it doesn’t have a high supply – unless the seller re-stocks soon, this card will sell out sooner than later.

It’s not hard to imagine its value increasing as Morant continues tearing up the league. 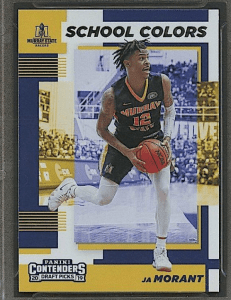 To sum things up, this card has a strong upside.

you’re on the market for a high-cost, high-return Ja Morant rookie card, the 2019-20 Collegiate Immaculate Ja Morant Rookie Patch Auto RPA /99! card should be on your radar. 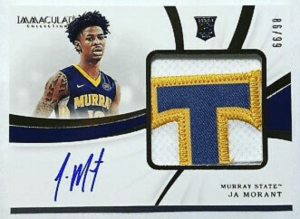 This is a sealed rookie card with Morant’s autograph and game-worn patch as the highlights.

Most of the time, whenever a rookie card has both, it’s a keeper.

Is a better long-term investment. Ja Morant Investment Report Granted, Ja Morant doesn’t have the hype of a Zion Williamson.

However, we feel he’s the future of the Memphis Grizzlies. Ja Morant is a versatile rookie who will only get better.

Don’t act surprised if he helps the Grizzlies become playoff contenders once again.