James Harden may not be the best teammate in the world, and he may not ever win an NBA title, but boy could he drop the dime of his opponents and rack up some sick video-game-like stats. 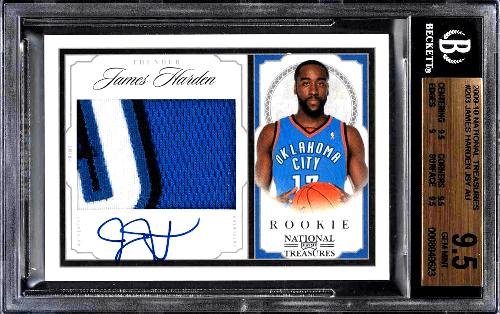 Harden only spent three seasons with OKC before a contract dispute led them to trade him to Houston. It was with Houston that Harden really exploded onto the scene as a superstar.

After 8.5 seasons with Houston, Harden was traded to Brooklyn, teaming up with Kevin Durant and Kyrie Irving. Unfortunately, injuries and off-court antics from Irving stopped the team from gelling properly.

Harden then got sent to Philly in a trade that sent Ben Simmons back to Brooklyn. It’s yet to be seen whether Harden is finally able to get his championship in Philly.

James Harden rookie cards have benefited from his shoot-first mentality but they have also been hampered by this mentality… it’s hard to imagine him winning an NBA championship playing like this… but stranger things have happened.

We do enjoy watching him drop dimes on his opponents like he’s on NBA Jam on fire mode! Plus looking at the crazy stat line the next day is equally enjoyable, especially when he’s on your fantasy team.

And who knows, if he changes up his style just to fit a narrative he may lose everything that made him who he is today. Bottom line, be you James, and keep chucking up that rock! 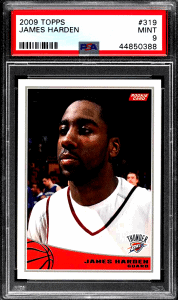 The 2009 James Harden Topps rookie card features a close-up of Harden with a stone-cold blank stare on his face that seems to say “I’m about to drop dimes on your ass”. 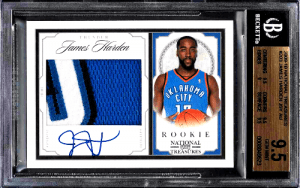 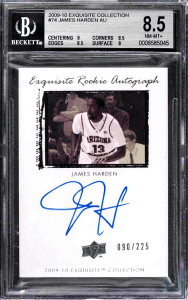 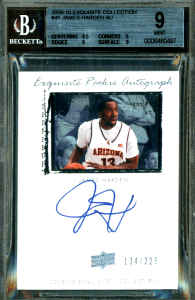 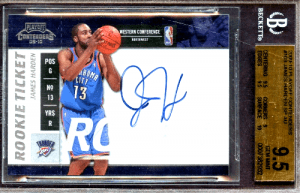 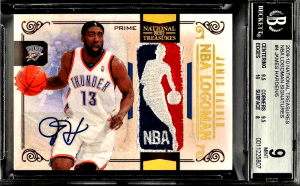 Unfortunately, Harden’s numbers have been on the decline since he left Houston. With Brooklyn he still put up solid numbers, averaging 24.6 and 22.5 points in his two seasons.

The drop was understandable because he was now playing second fiddle to Kevin Durant. He made up for this as a great facilitator.

However, his play has declined since his arrival in Philadelphia. He played well at first, but after the first 5-10 games, his play declined. His numbers are still solid, but they are not at superstar levels anymore.

We will have to wait and see if Harden can get back to form, but right now it looks like he’s on the decline.

Additionally, a championship would certainly bolster the value of his rookie cards. He has a chance to do it now that he’s partnered up with Joel Embiid in Philadelphia, but it is going to be a tough road.

Harden rookie cards are still a decent investment and should not be overlooked. If you already have one of his cards, you can sell it for a solid profit at any time.

However, we would encourage you to sell sooner rather than later because it is unlikely that Harden gets better at this stage of his career.